A nearly 118 year old murder case that remains unsolved to this day still haunts the town of Bucksport. A woman brutally murdered. Her name was Sarah Ware and her killer was never brought to justice. 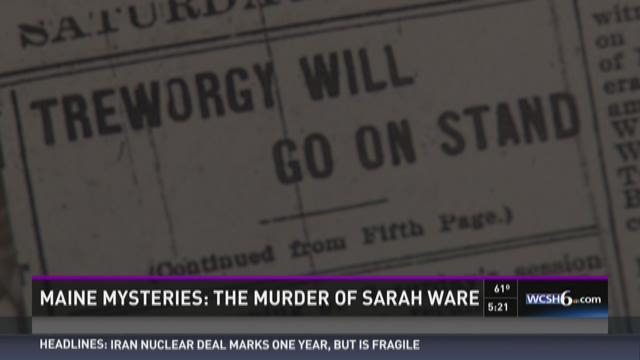 BUCKSPORT, Maine (NEWS CENTER)-- A nearly 118 year old murder case that remains unsolved to this day still haunts the town of Bucksport. A woman brutally murdered. Her name was Sarah Ware and her killer was never brought to justice.

Emeric Spooner, author and Bucksport Library's assistant librarian, has been fascinated by the case for years, even writing two books about what happened to Ware on the night of September 17th, 1898. A 52-year-old divorcee, Ware worked odd jobs, babysitting and cleaning houses. According to Spooner, on the night she was last seen, Ware was making her rounds, collecting payments.

Spooner said Ware's last stop before her home would have been the house of William Treworgy. A man with a violent history. "He had a temper problem, you know, he was a real rough kind of character."

Enraged by her demands for money, Spooner believes Treworgy beat Ware to death. Two weeks after she disappeared, Ware's body was found lying in the brush just off of Miles Lane. Her head severely bashed in. "They went to pick her up and her head fell off," said Spooner.

Treworgy was arrested after investigators found a blood-stained hammer with his initials on it. Witnesses also confessed Treworgy paid them to move the body, but he didn't stand trial until years later. By then, Ware's body had been repeatedly exhumed for examination. However, by July of 1902, the murder weapon went missing, witnesses recanted their damning stories, and Treworgy was eventually acquitted. But, one key piece of evidence was saved... Just in case.

"They kept her head as evidence for future trial and they kept it in lock up down at Ellsworth Courthouse," said Spooner.

And there it stayed, until some courthouse clerks found it in 1982. Sympathizers petitioned for the skull to be released. Finally in 1998, a century after her murder, Ware's broken skull was laid to rest... but possibly not with the rest of her. Her head and grave are located in Oak Hill Cemetary in Bucksport, but Spooner said Ware's daughter, Mildred, moved her mother's body after the trial. "And they didn't give her a gravestone, they didn't want her to be disturbed anymore."

Today, a case holding some of Ware's belongings sits in the Bucksport Historical Museum. A memorial to a woman long dead, but whose murder mystery still lives on.