New rules to allow non-citizens to qualify for General Assistance in Maine as long as they're taking steps to apply for asylum with the federal government.
Author: Chelsea Bard (NEWS CENTER Maine)
Published: 10:07 AM EDT July 18, 2019
Updated: 12:22 PM EDT July 18, 2019

AUGUSTA, Maine — Gov. Janet Mills announced Thursday that she has asked the federal government to provide financial support to Maine municipalities and local organizations that are working to support those seeking asylum in Maine.

Maine's governor also announced that the state's Health and Human Services Department is pursuing changes to the eligibility rules for General Assistance.

The new Maine General Assistance leniency policy, announced Thursday morning, is aimed at assisting the hundreds of asylum seekers who have arrived in Maine in recent months, which in turn, could help local businesses struggling to fill jobs. The Mills administration said it would also help ease the financial burden faced by Portland and other cities struggling to house, feed and care for asylum seekers. This according to a press release from her administration.

“This workforce shortage is one of the most serious long-term issues facing our state, and state government is working on its first long-term economic development plan in decades and engaging people of all ages and abilities to stay in Maine and join or rejoin the workforce. There is one group of people who are willing to work if we are willing to have them," Gov. Mills said.

The emergency rules are being adopted by Maine DHHS. Non-citizens will be eligible to apply for General Assistance as long as they can prove they are taking “reasonable good faith steps” to apply for asylum with federal officials.

Non-citizens aren't allowed to apply for work permits until six months after submitting an asylum application with the federal government.

Portland officials are temporarily housing at the Portland Expo 200-250 asylum seekers — including many families — who have arrived in the city in recent weeks after fleeing violence and persecution in Central Africa.

The city has received more than $800,000 in donations to help offset those costs and assist the asylum seekers, city officials have urged the state to relax the rules regarding General Assistance.

Under the new DHHS rules, non-citizens who are “lawfully present” or are “pursuing a lawful process to apply for immigration relief” would be eligible for General Assistance welfare benefits.

Mills said the change could also help with the long-term goal of tackling Maine’s workforce shortage.

Mills also asked the Federal Emergency Management Agency (FEMA) to dedicate federal funding to Maine municipalities that have experienced an influx of asylum seekers and to local organizations that are assisting them.

The governor’s request comes after Congress passed, and the president signed into law, emergency legislation that appropriates $30 million for “jurisdictions or local recipient organizations serving communities that have experienced a significant influx” of people. That funding is to be distributed through FEMA’s Emergency Food and Shelter National Board Program. 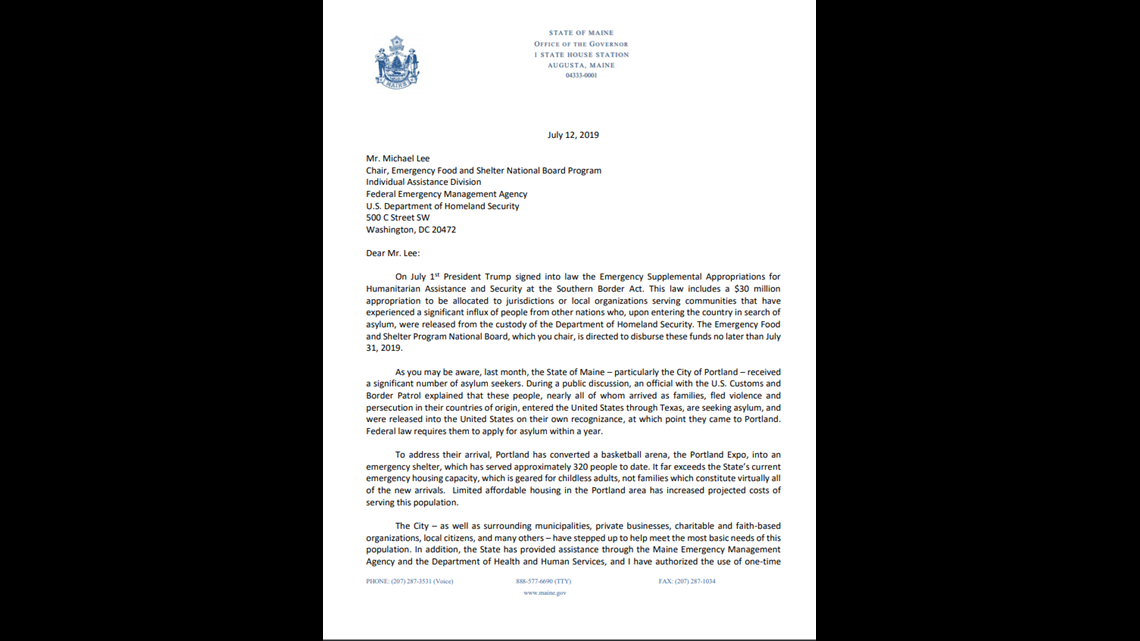