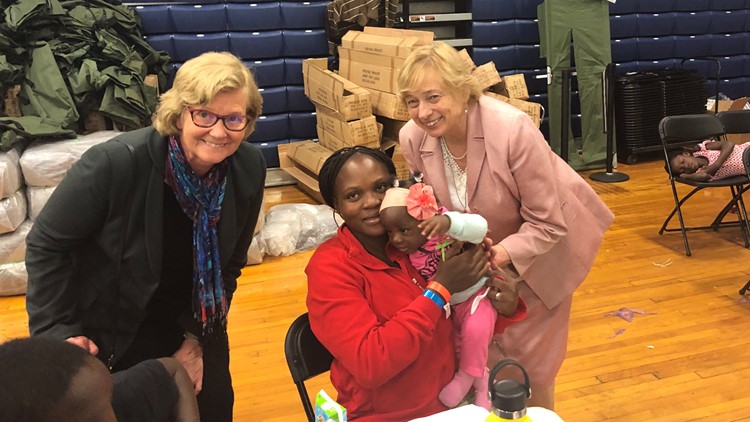 PORTLAND, Maine — City leaders in Portland say they are continuing to wait for a verdict from Gov. Janet Mills on whether the state will be providing any funds to assist with the city's asylum seeker emergency.

In the last month, more than 300 individuals seeking asylum have been bused to Portland. It has left city officials scrambling to find resources and long-term housing for the families. For the last few weeks, many of the asylum seekers have been staying at an emergency make-shift shelter at Portland's Expo building -- but according to city leaders, that space needs to be cleared out by mid-August due to contractual agreements with the Portland Red Claws.

City officials say they were told they would get answer from Mills by last week on whether the state would be able to provide any financial assistance but they have yet to receive a final answer. In the meantime, they are working around the clock to figure out phase two -- housing.

Portland's director of communications, Jess Grondin, says the city has already placed a few families in Brunswick and plan to place even more there by the end of the week. Grondin says they are also looking at housing options in Bath.

"I would just like to stress that we are not just moving people to a location and not making sure that they have the wraparound services that they need," Grondin said. "We are outreaching to groups that are in that area that provide these service is already who have stepped up and offered services to make sure that the families thrive and that they have what they need to be successful."

Brunswick is just one of a handful of neighboring communities have offered to provide assistance with things like temporary-housing. However, immigrant advocates in Portland say this support just scratches the surface and what is really needed is assistance at the State level.

We reached out to Gov. Mills' staff about the delay in responding to city officials. We received this statement:

"The State, through the Maine CDC and with federal funding support, has provided public health nurses and overseen the deployment of trained, credentialed volunteers through the Medical Reserve Corps to serve the health needs of those newly-arrived, including vaccinations. The Maine Emergency Management Agency has provided technical support to the shelter and has coordinated volunteer non-profit organizations to help ensure the smooth delivery of services. Governor Mills and her Administration continue to consult with service providers, housing specialists, educators, faith-based organizations, employers, and public officials to address short-term and long-term challenges as the Maine Department of Health and Human Services coordinates the State’s efforts to connect individuals with medical, legal, educational, and housing supports."

"Whatever Governor Mills comes up with, once we know, then I think everyone in the city of Portland, the city of Brunswick, everybody can make plans and start working underneath that large umbrella," said Martha Stein, executive director of Hope Acts.

Hope Acts is a Portland-based organization that helps provides transitional housing for asylum-seekers new to the Greater Portland Area. Stein says this delay in answers can cause added stress to those seeking asylum and their families.

"This not knowing is really difficult," Stein said. "While it’s far better than what’s happening at the southern border, keeping people in limbo is horribly stressful for the people that have arrived here."

We have reached out again to Mills' staff about when the city and residents of Maine can expect an answer about funding, we have not heard back yet.