The Machinists Union, which has more than 600,000 members across the U.S., voiced their support for the Local S6 union members on strike. 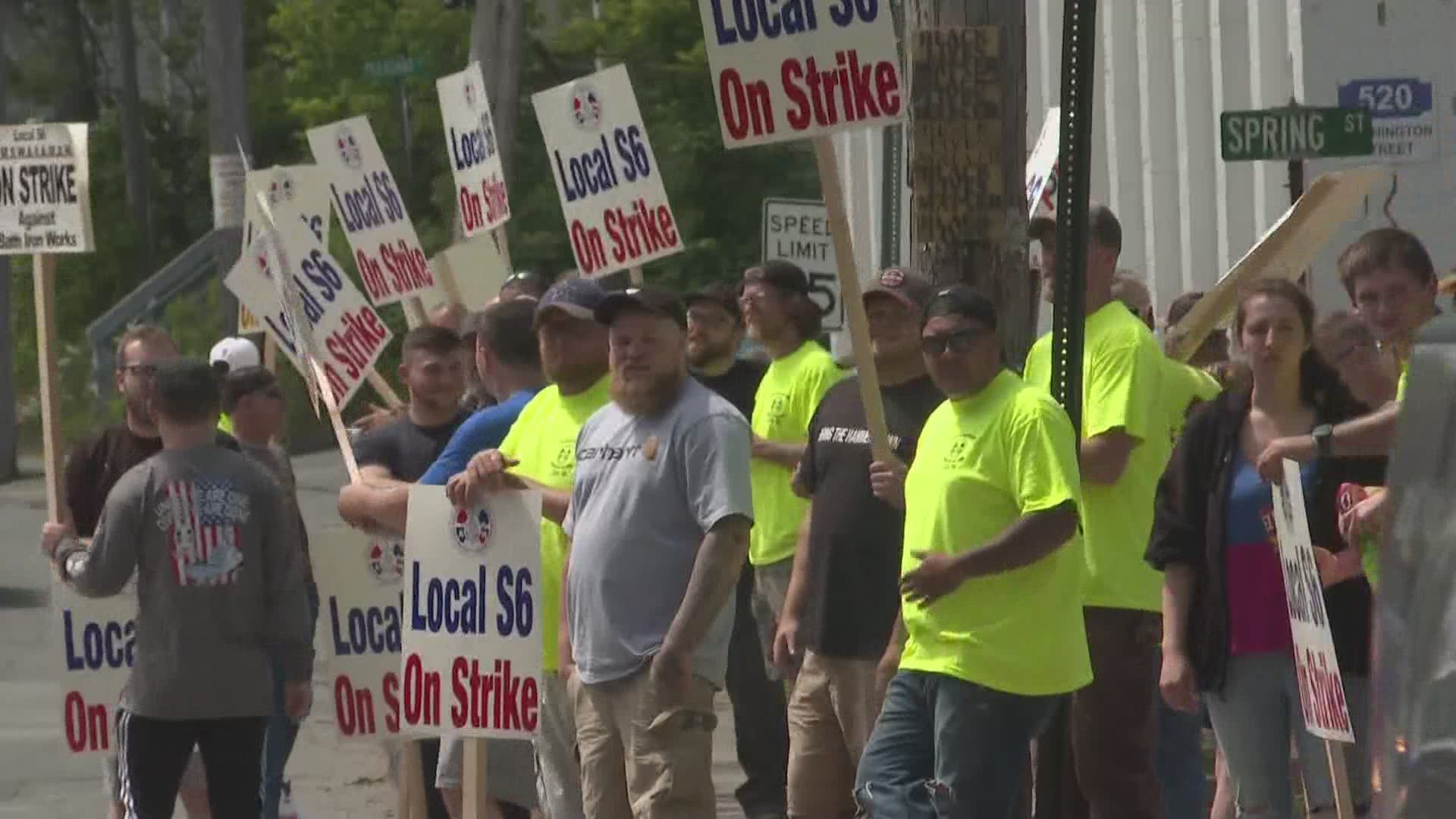 BATH, Maine — For the first time in nearly 20 years, there is a major strike at Bath Iron Works. The last strike, which happened in 2000, lasted 55 days. On Monday, more than 4,300 members of the International Association of Machinists and Aerospace Workers (IAM) Local S6 union went on strike after 87% of voting members voted to reject the latest contract offer from the shipyard and strike.

After the current contract expired at midnight, hundreds of workers walked off the job at 12:01 a.m. Monday morning and began the strike.

The International President of the IAM union Robert Martinez Jr. voiced his support for Local S6 members on strike, saying in a statement, "These families have our unwavering support as they stand up for justice and dignity on the job."

IAM has more than 600,000 active and retired members across North America in the shipbuilding, aerospace, airlines, defense, transportation, railroad, and other industries. Martinez said any and all of the union’s resources are being deployed to assist Local S6 "as they bravely take on this employer."

Jackson said, "This is an outrageous stunt by management in order to break up a union, and quite frankly, they think that we’re all too stupid to notice – lawmakers, workers and the general public. I proudly stand in solidarity with the hardworking men and women at BIW demanding a fair wage. Bath built is best built because of these people standing on the picket line."

“There can be no stable economy without fair wages and fair employment policies," Vitelli said. "The hardworking men and women of BIW have made a hard choice. They are standing up for what they know is right for themselves, for each other, and for their families. Corporate leadership at Bath is trying to cut corners by paying substandard wages, increasing insurance costs for workers and hiring out-of-state subcontractors. No worker wants to strike. No worker would rather stand outside their place of work holding a sign instead of working inside, doing what they do best. But a line must be drawn."

In response to the strike, Gov. Janet Mills released a statement to NEWS CENTER Maine urging representatives to return to the negotiating table.

"Bath Iron Works is one of the largest employers in Maine, providing thousands of jobs to hardworking people and making it a vital pillar of our economy," Mills said. "I urge representatives for Bath Iron Works and Local S6 to return to the negotiating table, resolve their differences, and reach an agreement, as difficult as that is. Doing so will ensure the stability of the shipyard’s operations in the short-and long-term, support its talented workforce and their livelihoods, and maintain its place as an economic driver for the state.”

Rep. Jared Golden wrote a letter to union workers saying he is, "100% in support of you on this picket line.

Golden also said he'll be in Washington, D.C. for the next two weeks working on the National Defense Authorization Act, which will include authorizations for Navy shipbuilding.

"I am on that picket line with you in solidarity," Golden continued. "Do not hesitate to contact me if I can be of any help."

"I hope the management at Bath Iron Works will return to the negotiating table and work to reach an agreement with the union that protects the health and safety of its workforce. If the COVID-19 pandemic has made anything crystal clear, it’s that frontline workers who are showing up to work every day, putting themselves and their family at risk to keep our economy going, deserve to be heard and protected. The skilled employees at BIW are no different. Worker protections for the men and women who build the best ships in the world should be a priority that can bring both sides to agreement."

Credit: AP
Sen. Susan Collins, R-Maine, speaks during a hearing to examine caring for seniors amid the COVID-19 crisis on Capitol Hill, Thursday, May 21, 2020, in Washington. (AP Photo/Manuel Balce Ceneta)

"I hope that the negotiators from Local S6 and management will return to the bargaining table quickly to resolve their differences. The inability to reach an agreement not only affects the skilled men and women employed at the shipyard but also the many workers in the supply chain, the economy of our State, and the ability of BIW workers to deliver much-needed ships to our Navy."

“More than 600,000 Fighting Machinists from across North America send solidarity to the hardworking men and women of IAM Local S6. These families have our unwavering support as they stand up for justice and dignity on the job. Any and all of our union’s resources are being deployed to assist our membership at Local S6 as they bravely take on this employer.

This strike is about more than wages and benefits. It is about working people having a voice in their futures and taking a stand for their families and the state of Maine. Despite our repeated warnings to the management of Bath Iron Works, this employer has continued to take taxpayer dollars and outsource good Maine jobs to out-of-state contractors. The company is engaged in flat-out union-busting, and is exploiting the current pandemic to attempt to outsource work from its dedicated employees, who are risking their health to build ships that protect our national security. I salute our membership, who were left with no choice but to strike to defend the livelihoods of themselves, their families and their communities.

For generations, our members at Local S6 in Bath have proudly built the military ships that keep our servicemen and women safe. They are the reason why ‘Bath Built is Best Built.’ We simply ask that management recognize the sacrifices our members have made, and work with us to find a solution that promotes the well-being of our membership, their families and the entire state of Maine.”

The complete statement from Sen. Jackson:

“The hardworking men and women at BIW are only asking to be paid fairly for the work that they do. If you ask me, that’s not too much to ask. No matter how hard you look, you will never find a group of workers who will ever agree to allow subcontractors to come in and replace them, regardless of whether or not they are a part of a union. Right now, BIW is spending more money, taxpayer dollars I might add, to hire out-of-state workers to avoid paying their employees a decent wage. It’s unconscionable. At Portsmouth Naval Shipyard, they respect their workers and treat them as professionals. You can earn almost double working at Portsmouth for the same kind of work than at BIW. Even in Aroostook County, where wages tend to be lower than other parts of the state, employers pay more per hour for these trades than BIW.

This is an outrageous stunt by management in order to break up a union, and quite frankly, they think that we’re all too stupid to notice – lawmakers, workers and the general public. I proudly stand in solidarity with the hardworking men and women at BIW demanding a fair wage. Bath built is best built because of these people standing on the picket line.

I understand what BIW means to Maine’s economy, but I will never turn my back on workers who have so clearly made their case regarding unfair policies and wages. I encourage management at BIW to get back to the table and start treating these workers as part of the team – an invaluable part of the team – that makes these ships.”