A Louisville church is standing firm after finding itself expelled from the Southern Baptist Convention this week. 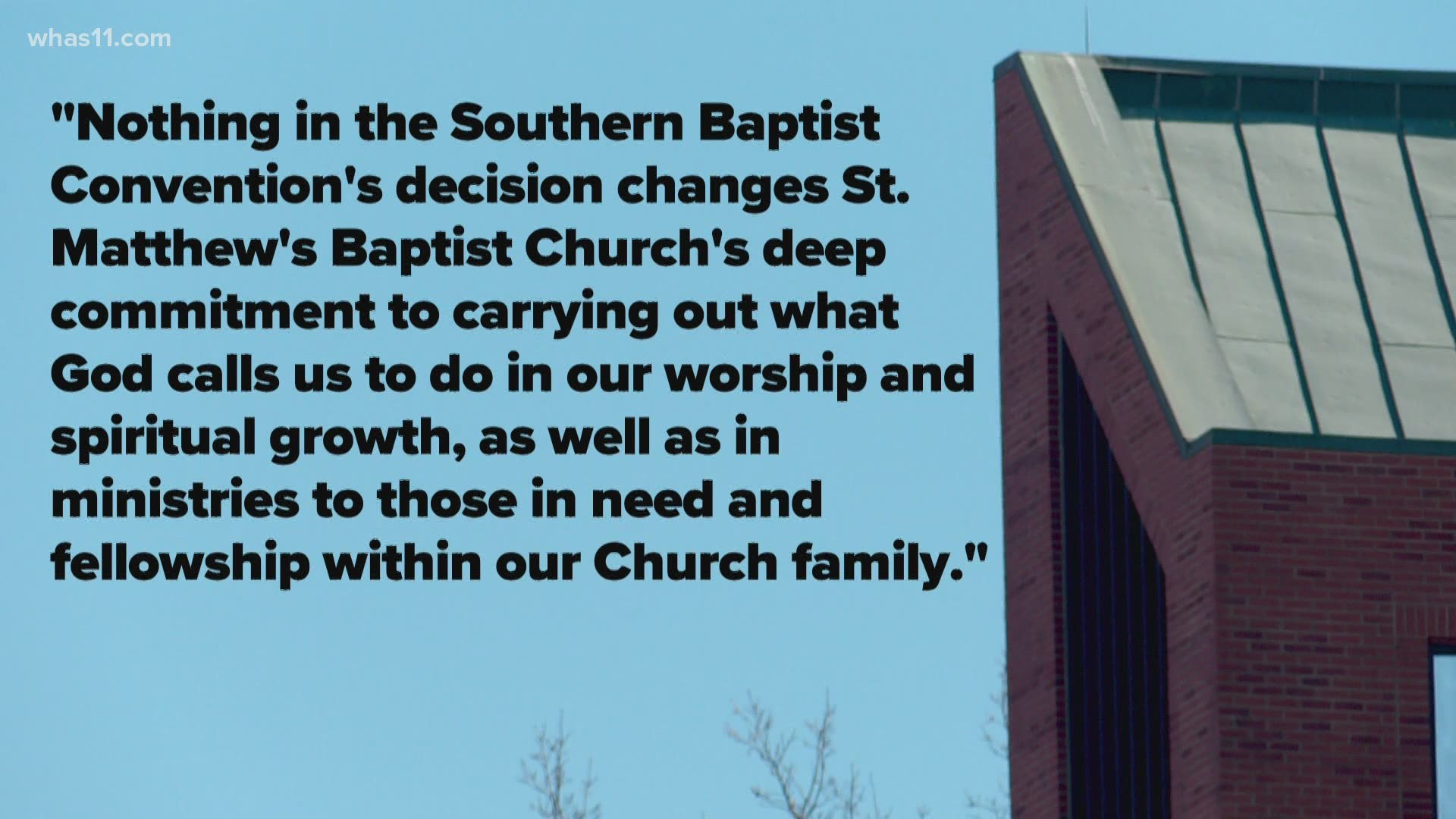 LOUISVILLE, Ky. — The Southern Baptist Convention voted Tuesday to expel St. Matthews Baptist Church for its stance on not excluding members who identify as LGBTQ.

"The Convention's decision was apparently based on our congregation's November 2019 reaffirmation of SMBS's long-standing policy that a belief in Jesus as personal Savior is the sole criterion for membership in our Church," St. Matthews Baptist Church wrote in a statement.

"Anyone who argues that the Bible - OT [Old Testament] and NT [New Testament] - is not clear about the sinfulness of homosexuality is either very confused or deliberately dishonest about the structure of biblical theology and the clear meaning of the texts," Mohler wrote.

"Nothing in the Southern Baptist Convention's decision changes St Matthews Baptist Church's deep commitment to carrying out what God calls us to do in our worship and spiritual growth as well as in ministries to those in need and fellowship within our Church family," St. Matthews Baptist Church wrote in its statement.

The church faced a similar situation in 2018 when the Kentucky Baptist Convention expelled it for its support of the Cooperative Baptist Fellowship, which at the time had recently lifted a ban on hiring LGBTQ employees.

"In 2018, our congregation adopted the policy of maintaining our existing denominational relationships unless and until a denominational partner chooses to disaffiliate with us," the church wrote in its statement. "We continue to stand by that policy as we seek to work collaboratively with others for the greater good."

Fairness Director Executive Director Chris Hartman said he has noticed a trend in recent years of more churches and faith groups taking a stand for inclusivity when it comes to the LGBTQ community.

"It's a sacrifice that they have made in order to include all people including LGBTQ people who want to celebrate their faith in the same way anyone else does," Hartman, who does not have any affiliation with St. Matthews Baptist Church, said. "I think about 10 years ago, we really started to see this movement around congregations of faith, many more of them becoming open and affirming. There's going to come a point in time in which it is really peculiar for a faith community to not be open and affirming."