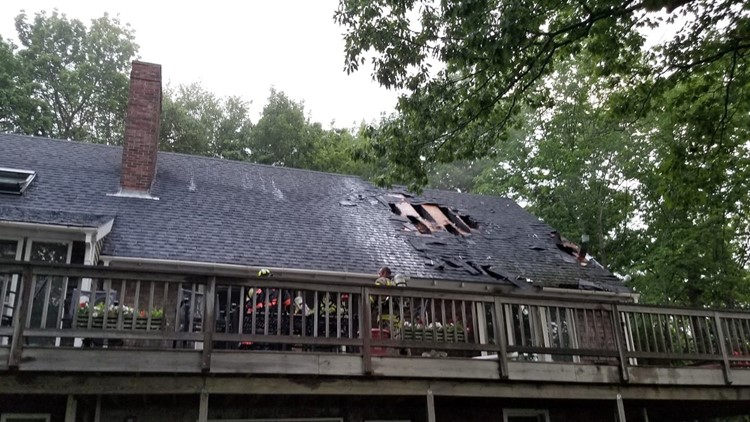 CAMDEN, Maine — Camden Firefighters say a lightning strike is likely responsible for a house fire Saturday night that sent a Rockport firefighter to the hospital.

Camden Fire Chief Chris Farley said the homeowner called 911 aroudn 6:11 p.m. for a report of smoke coming out through the gable vents of his home at 555 Belfast Road, which is also Route 1.

The homeowner, Ward Graffam, told firefighters he was watching TV when "he heard the largest bang he's ever heard in his life," Farley said.

Graffam told firefighters the power went out, and he could smell burning wires, so he went outside and saw smoke coming from his home.

Farley said based Graffam's narrative, it appeared lightning struck the home, or possibly a nearby transformer.

When crews from Camden, Rockport, Lincolnville, and Hope arrived, they saw smoke coming out of both sides of the house.

Camden Fire & Rescue
We're thankful for the significant effort made by our Firefighters and the Mutual Aid departments at the home fire during the heat this afternoon. Route 1 was closed for several hours so we could...

They found the fire in void spaces in closets in the second floor bedroom. Firefighters had to knock down sheetrock and tear out insulation to get to it.

"The heat and humidity was taking its toll," said Chief Farley. "It took quite a few firefighters to get that work done."

During the process, a Rockport firefighter was hit in the head by falling debris from the ceiling, Farley said. That firefighter was taken to Pen Bay Medical Center, and received X-rays for neck pain, and was treated and released Saturday night.

Chief Farley said firefighters were swapping shifts every 15 to 20 minutes due to the hot and humid conditions both inside and outside the house. It took them close to 90 minutes to get the fire under control.

Farley said the house had significant damage. He said Graffam was the only person home at the time, and was not injured.