Mayor Foley canceled the state of emergency Monday afternoon after officials say there is no longer any risk of flooding as a result of last week's landslide. 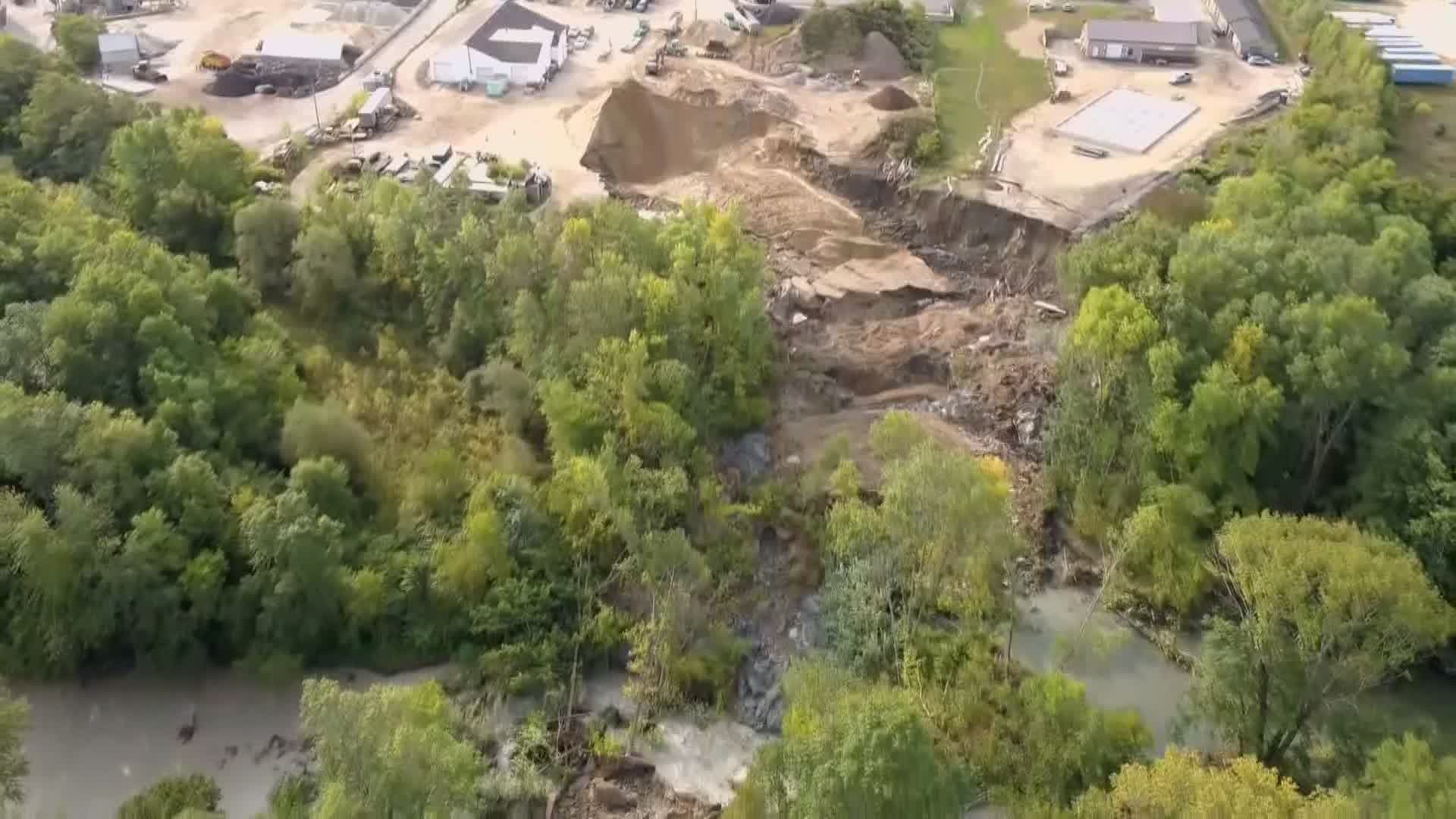 WESTBROOK, Maine — Westbrook officials held a press conference Monday afternoon to provide an update on the landslide that blocked the Presumpscot River last week, triggering a state of emergency declaration. Mayor Michael Foley canceled that order Monday, saying there is no longer any risk of flooding.

On Saturday, Army Corps and geologists were on-site in Westbrook to assess the situation.

The landslide happened just off of Warren Ave. Wednesday morning, triggering a flash flood watch prompting the City of Westbrook to declare a state of emergency.

Westbrook Mayor Michael Foley said the proclamation was ordered upon advice from the Director of Emergency Management, who determined that the landslide "poses a present, reasonable, and imminent danger to public health, safety, or general welfare of the people of Westbrook."

Over the weekend, Foley told NEWS CENTER Maine the state of emergency was set to be renewed by the city council on Monday to be in effect until the area is safe, but instead, it was canceled Monday.

The special city council meeting that was planned for Monday night was also canceled. Officials say they will "let nature take its course" and allow the flow of the river to work its way through the area.

"Some trees that are still standing along or within the river banks may naturally fall. That's one of the reasons we suggest it is unsafe for people to venture down into," Foley said.

The state of emergency in Westbrook has been CANCLED. As well as the special city council meeting tonight. Officials will no longer be asking for an extension of that order #NEWSCENTERmaine

The flash flood watch was canceled around 10 p.m. Wednesday night, but the state of emergency remained in effect until Monday. At one point the water upstream rose to over 13 feet, but as of Thursday levels dropped below 8 feet. Officials do not anticipate any concerns with flooding.

"At this point, there is no immediate concern for flooding and time is on our side as we assess the situation," Foley said during a press conference on Thursday.

Foley told NEWS CENTER Maine that officials at the nearby Sappi paper mill were able to adjust dams to prevent significant flooding upstream.

Westbrook officials held a press conference Thursday afternoon to provide an update on the landslide and response efforts. Mayor Foley said there were no injuries, but a number of properties were damaged and the water flow along the river experienced significant blockage. The first concern was potential flooding, which prompted him to issue the emergency proclamation.

The landslide was first discovered around 8:30 a.m. on Wednesday when people saw trees and the ground moving.

"It is a fairly significant landslide 250 to 300 feet," Westbrook Fire Chief Andrew Turcotte said Wednesday. "So, many trees, bamboo, rocks, and soil that went into the water [is] causing a dam, which obviously we do not want.

We have canceled the Flash Flood Watch for the Presumpscot River in Cumberland County, ME. The threat for a flash flood has diminished but there is still an small chance waters could rapidly rise again. Residents should continue to heed the advice of local officials. #MEwx #NHwx pic.twitter.com/S4KqVGQZXi

"The problem with the dam would be that water would back up behind it causing an issue of flooding. There is no problem with that as of yet," Turcotte said Wednesday afternoon.

Crews on the scene Wednesday worked to assess the possible impact on two nearby lines that are in the debris field—a 60-inch water main and a 16-inch gas main.

Foley said the City convened a gathering of officials and experts Thursday morning with the Maine Dept. of Environmental Protection, state and federal emergency management agencies, local and county officials, as well as Sappi and other businesses affect to address the situation at the river. The City has also been in communication with Gov. Janet Mills and the U.S. Army Corps of Engineers, who will make resources should the City need them.

In the press conference on Thursday, Foley said Sappi responded immediately by restricting water flow through their five dams upstream along the river.

Wild! A landslide in Westbrook has blocked the Presumpscot River. Water has sharply risen. @NWSGray has issued a Flash Flood Watch – water levels upstream will keep rising and could suddenly change downstream if the dam breaks. Pic via @ShannonMossTV. pic.twitter.com/lTFO6h8Wfd

Foley said the situation benefits from a dry summer season and lower than normal water levels. The National Weather Services has advised the City that there are no major rain events forecasted for the upcoming week, which Foley says gives the City favorable conditions for deciding next steps.

"At this point, there is no immediate concern for flooding and time is on our side as we assess the situation," Foley said Thursday.

Lindsay Spigel, a Maine geologist and landslide expert, spoke with NEWS CENTER Maine on Wednesday and said landslides are actually very common in Maine, but they usually happen in the spring.

She pointed out that what they could observe from drone footage is the appearance of blue clay, which could have caused the landslide.

Lindsay Spigel, a Maine geologist/landslide expert, explains that blue clay is a significant factor. She says these are not uncommon events in Maine. #NEWSCENTERmaine pic.twitter.com/GoLmaCrewz

"[Blue clay is] what geological engineers call sensitive clay which means that when it's left on supported or disturbed can liquefy it and flow which is what caused this landslide," Spigel said.

Spigel was also on the press conference Thursday, and further explained possible factors that could have led to the landslide.

Spigel explained it's not just one factor that could have caused it, but the confluence of multiple factors. She a geotechnical team must research and take soil samples to determine what specifically could have triggered the landslide.

Spigel said landslides are not unusual for southern Maine.

"These have been happening for thousands of years, every so often we just get a reminder of their existence," Spigel said.

Access to the site is difficult because the ground is unstable, but the City emergency team helping coordinate engineers and Geotechnical teams to develop the best approach for cleaning the river and assuring permanent stabilization of the area impacted by the event.

Foley reminds the public to stay clear of the area.

Westbrook Fire Chief Andrew Turcotte says an expert investigation is underway, Army Corps of Engineers has been called in to determine the best course of action moving forward. #NEWSCENTERmaine pic.twitter.com/te8IZYMUMG