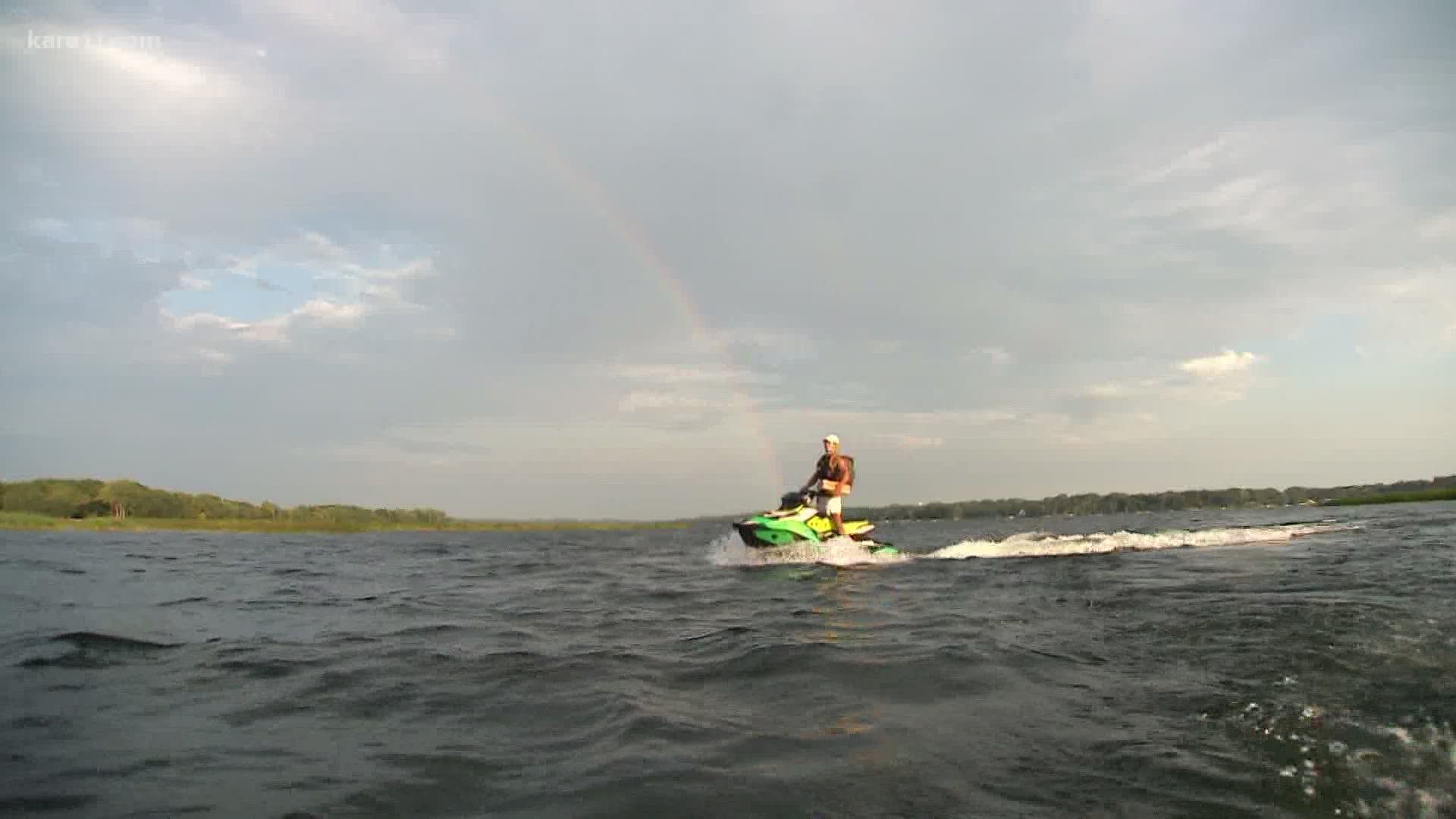 WHITE BEAR LAKE, Minn. — Dining out at the lake has always come with a natural boundary: restaurants on shore and boats on the water.

Now, a University of St. Thomas student is bridging the lake food gap – on a jet ski.

“I've always wanted to come up with an idea that people are like ‘Wow, I wish I would have thought of that,’” Dylan Dierking says.

Earlier this year, Dylan began providing a zippy connection between hungry boaters and restaurants near the shoreline of White Bear Lake.

“To be out on the lake away from people and just relaxing and swimming and have the food dropped off, it's a wonderful experience,” Allen Law said from the seat of his pontoon after accepting a restaurant delivery from Dylan.

Dylan hatched the idea with a friend but has since taken the reins himself.

His mom came up with the name "Foodski," which is now embroidered above the brim of Dylan’s white delivery cap. “There’s no way we’re going to think about anything better than that,” Dylan laughs.

Dylan correctly reasoned that busy White Bear Lake would have plenty of boaters who’d prefer to stay on the lake rather than dock for food.

With encouragement from lakeside restaurants, the 22-year-old fired up his jet ski and went to work.

“Who doesn’t want to drive a jet ski around for living,” he says with a grin.

Dylan charges a delivery fee of 25 percent of the food bill, with a $10 minimum delivery charge.  He delivers Thursday thru Sunday.  Additional details can be found on the Foodski website.

Dylan toyed with using a drone or a dinghy for delivery before settling on a jet ski. He packs food in an insulted backpack for the trip across the lake, using his legs as shock absorbers to keep sandwiches and pizzas from turning into smoothies.

The novelty of jet ski food delivery hasn’t hurt Dylan’s business. “I would say 90 percent of the time people have their cameras on and they’re filming me as I’m approaching the boat,” he says.

Dylan was well positioned to launch an enterprise. At 19, he started a clothing line he later parlayed into a full ride scholarship at Schulze School of Entrepreneurship at University of St. Thomas.

White Bear Lake was a natural starting point. Dylan’s parents still live across the street from the lake. He has the outline of White Bear Lake tattooed on his forearm.

Yet, he’s not content to stay put. Dylan is already making plans to expand the business to the St. Croix River and Lake Minnetonka, with other destination waterways also under consideration.

Dylan hands Kristin Rivers several boxed dinners as she leans over the edge of a pontoon.

“I grew up in Florida where we’re always on boats and I’ve never had such nice service before on a boat,” she says.

Dylan’s final delivery of the evening is to a dock he knows well. His parents, Lynn and Jim Dierking, are waited at the end of the dock for two Pizzas Dylan hands them.

Credit: Devin Krinke, KARE
Lynn and Jim Dierking on the end of their dock with son Dylan

“He's been talking about this for a couple years and I love that it's happening,” Dylan’s mother says.

Dylan concedes he’s doing less recreational jet skiing this summer, but why ride for free when you can get paid for it?

“Doing what makes you happy and what’s fulfilling I think is super important to leading a true full life,” he says.