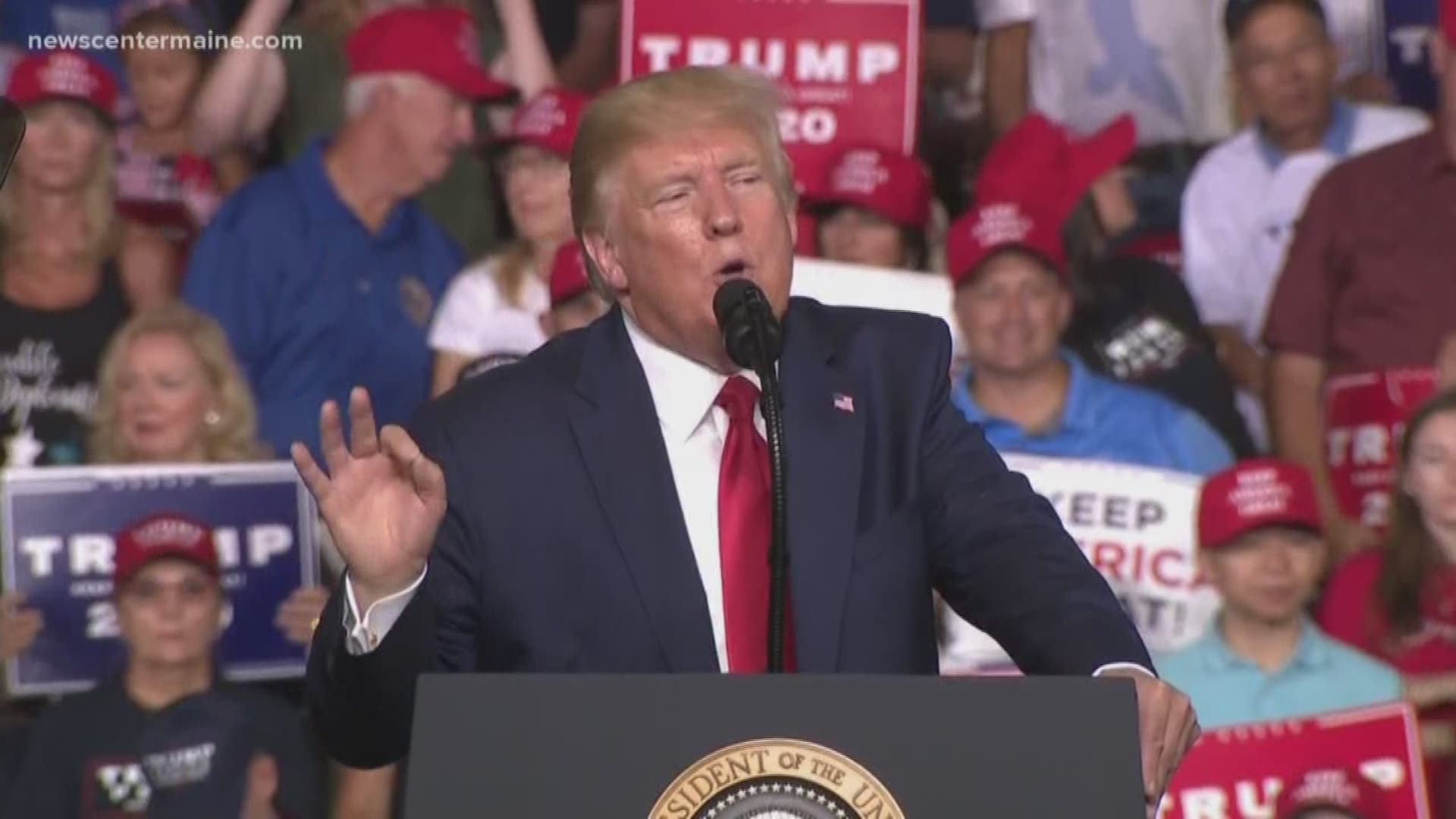 MANCHESTER, N.H. — Throngs of people wearing red caps and holding signs stood side by side at Southern New Hampshire University Thursday night to listen to the President's first 2020 campaign rally in the state.

President Donald Trump began his speech thanking New Hampshire for its support in the presidential primary, giving him his first victory. He went on to reference the movement that he and his followers began in 2016 -- "the greatest political movement in the history of country".

A key point in Thursday's rally was that this movement and the "Make America Great Again" slogan (which Trump coined "the greatest slogan in the history of politics in America") were changing slightly. Trump told those in the crowd, fans and opponents alike, that he was giving up that era for a new phrase -- "Keep America Great".

In part, the President said that was because of the work his administration has done so far -- in his words, "America is working again, America is winning again, and America is respected again -- respected like never before".

Trump said that respect goes beyond the borders of the United States -- but added that, "If I was the most popular, I'm not doing my job right", saying some polls show that President Obama was more popular in countries like Germany, but Trump says that's because the U.S. was "paying for (their) protection".

When considering his Democratic rivals in the 2020 race, the President focused mainly on "sleepy" Joe Biden and Elizabeth "Pocahontas" Warren, who he said he had hit "long and hard" but "too long ago" -- assuring voters it could be "revived very easily and very quickly, and we're going to have some fun in the state of New Hampshire".

Words the President used to describe his opponents and their policies included "radical" and socialist -- saying they are politicians who slander law enforcement and look down at hard-working citizens who make the country run.

He added, "A vote for any Democrat in 2020 is a vote for the rise of radical socialism and the destruction of the American Dream."

To close out his rally, Trump pointed to a list of policies and issues that he says he plans to continue to work on, including:

Trump did mention mental health in regards to securing Second Amendment rights, saying "mentally deranged and dangerous people" should be taken "off of the streets" and put into mental health institutions.

He also touched on Chinese tariffs and sanctuary cities.

"You have no choice but to vote for me," Trump told the crowd at one point, referring to their retirement funds and the country's economy. "Whether you love me or hate me, you've got to vote for me."

RELATED: At New Hampshire rally, Trump ties US success to 2nd term: 'You have to vote for me'

The President's polling numbers in New Hampshire indicate he will have an uphill climb to winning the state in 2020.

In 2016, Trump lost the state to Democratic opposing candidate Hillary Clinton by about 2,700 votes.