You ever had jury duty? Have you tried to get out of it? We take a look at how some have dealt with going through the system. 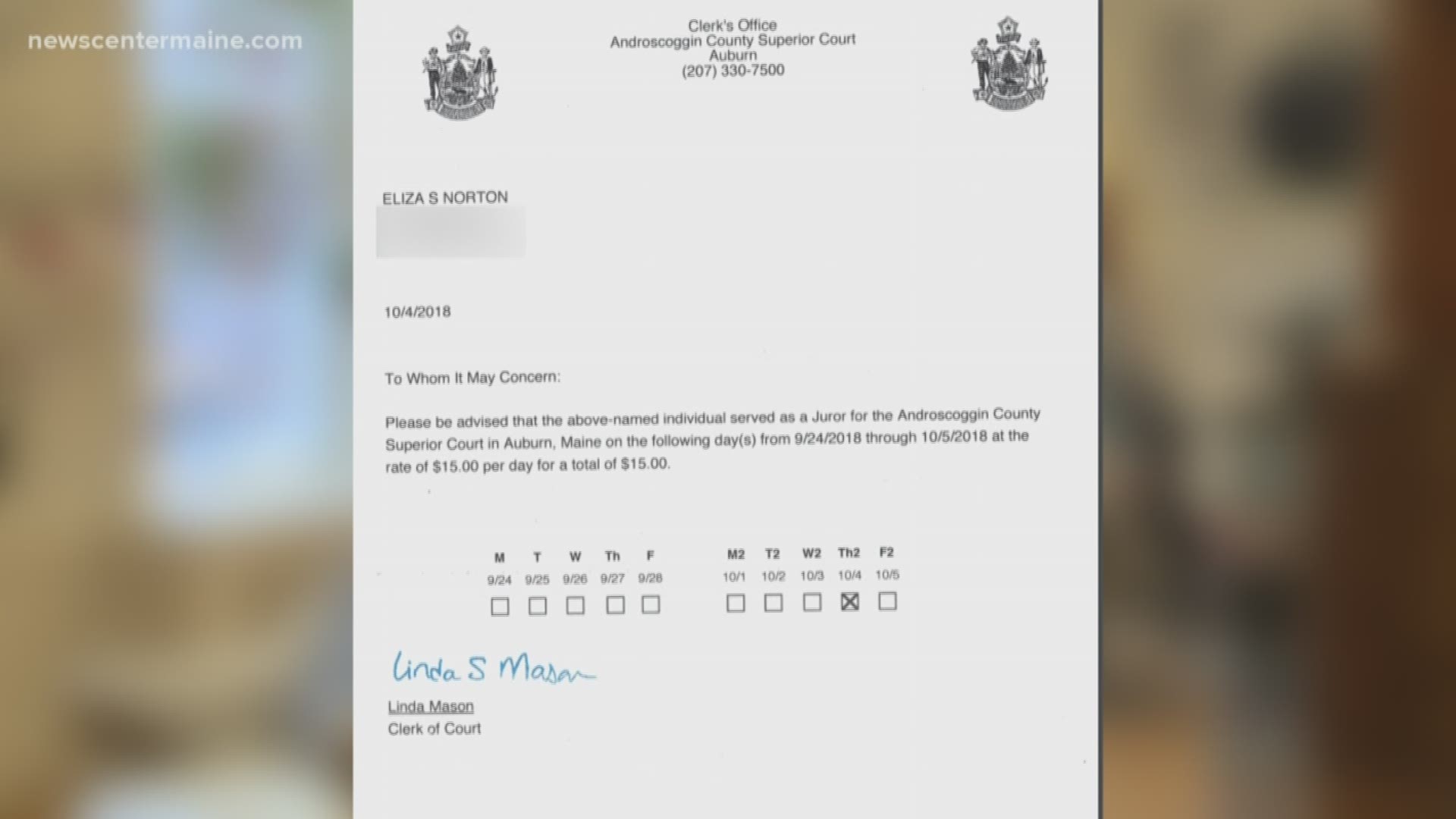 AUGUSTA, Maine — Getting a jury duty summons in the mail isn’t something everyone looks forward to. In fact, the first question many people ask is “how do I get out of it”?

Jury Duty is not an option, it’s mandatory. But some courts in Maine are seeing fewer and fewer people showing up for it.

Eliza Norton, like many people is very busy. She’s the General Manager of Akari, a salon and day spa in Portland. She’s a student, a wife and a mother of two.

Last October she received a summons for jury duty and thought the same thing many people do. "I don’t have time for this."

But Eliza made the time. "I just felt like it was my turn, I had to show up and be a part of it."

She was in the minority.

"What I found interesting is the amount of people that didn’t show up." Norton said.

Superior Court Justice William Stokes was the judge who oversaw the proceedings Eliza was a part of.

"We called in 300 jurors and 150 showed up, so that’s very troubling" Justice Stokes said.

Stokes says when that many jurors ignore a summons, it can hamper their ability to provide a jury trial and it puts all of the burden on the people who do show up.

"It’s unfair to litigants, unfair to the jurors who actually show up and are willing to serve."

As a veteran prosecutor in Maine, Justice Stokes has spent most of his career trying cases in front of jurors. He has tremendous passion for the jury system.

"Government said you did this, you deny it. Who's going to make that decision? Not a dictator, a sheikh, not an emirate. it's your neighbors."

Ultimately solved by 12 jurors, from all walks of life, who have no personal stake in the action.

Stokes says "when we lose that ability to have decisions made by ourselves then we don't have government by the people, for the people, of the people."

Juries were of great importance to our founding fathers. They believed so strongly the right to be tried by a jury of peers it was included in the highest law of our land. Our constitution.

Jury trials, nationwide, are becoming less common. And not because people are objecting to jury duty.  In civil and criminal cases, attorneys and prosecutors have more options.

Cumberland County District Attorney John Sahrbeck says "it's not simply guilty, not guilty. Now there are diversionary tactics that prosecutors use all the time that are in the interest of justice."

"Which is to reduce recidivism of defendant and represent the victim, but also allow a defendant to take responsibility for their actions" Sahrbeck says.

Justice Stokes says while the law encourages settlements preserving the right to a jury trial is critical for our democracy. "We're one of the few countries in the world that does this."

As annoying and inconvenient as it can be.

Representative Paul Davis agrees. He hears from many constituents that they simply can't afford to take the time off of work. He is proposing a bill that would increase jurors pay from $15 dollars a day to $50.

"Why should we not help them out some, so the emphasis is to thank them and reward them for their good service" Senator Davis says.

A service to her community that Eliza Norton found so rewarding.

"Like a lot of people I expected to be inconvenienced by the jury duty call but I didn't except to go in and have this experience of inspiration with it" Norton says.

A compelling case for the importance of jury duty.