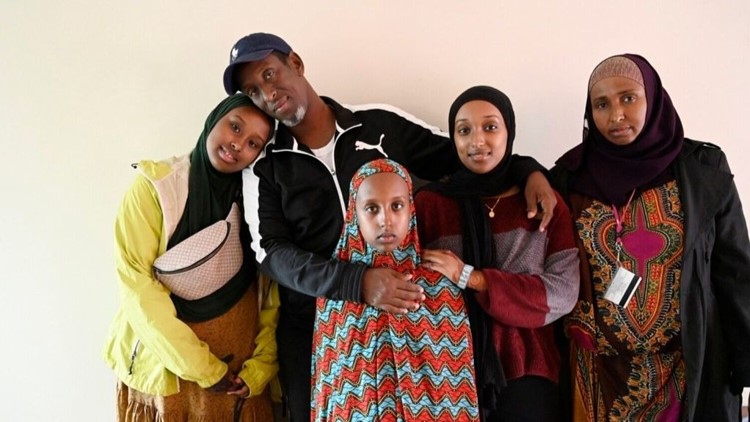 Photo by: Shawn Patrick Ouellette/Staff Photographer
Abdigani Faisal Hussein poses at his home in Portland on Wednesday with his family, from left to right, Amira Hassan, 14, Faryaad Hassan, 15, Fahima Hassan, 16, and his wife, Hibo Abdi.

Judge rules Somali man detained for stimulant can stay in US

PORTLAND, Maine — A federal immigration judge has ruled to defer the deportation of a detainee from Somalia who was convicted years ago of possessing an illegal stimulant.

The judge ruled in August that Abdigani Faisal Hussein, of Portland, Maine, would likely be subject to torture in Somalia, so his removal from the country is being deferred under the Convention Against Torture. Hussein's attorney, Ben Wahrer, said last week the ruling means Hussein can remain in the U.S., but the government could seek to enforce his removal if conditions were to improve in Somalia.

Immigration and Customs Enforcement detained Hussein in March 2018 because of his 2002 prosecution and later conviction for possession of khat, a stimulant popular with Somalis that is illegal in the U.S. He was eventually transferred to a New Hampshire correctional facility for detention and faced deportation. Wahrer said Hussein is now with family in Portland.

"It definitely feels like a victory," Wahrer said. "For Mr. Hussein and his family, it has been gut-wrenching this whole time."

Khat is common in parts of Africa and the Middle East and is legal in many countries. Hussein received probation for his conviction for possessing it, but the felony left him vulnerable to deportation.