ELLSWORTH, Maine (NEWS CENTER) -- David Stackpole is a sixth grade teacher at Ellsworth Elementary Middle School in Ellsworth, Maine. He has been teaching for more than four decades. 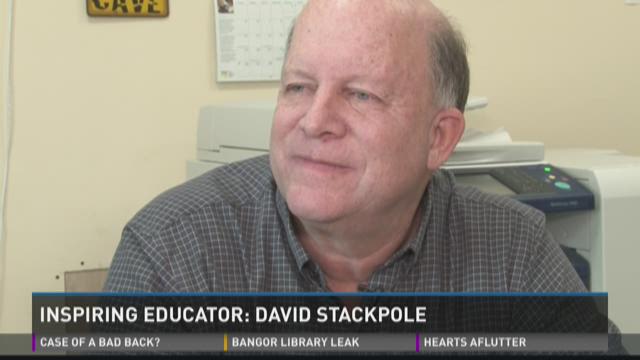 ELLSWORTH, Maine (NEWS CENTER) -- David Stackpole is a sixth grade teacher at Ellsworth Elementary Middle School in Ellsworth, Maine. He has been teaching for more than four decades.

"When you said inspiring teacher, I don't really feel that way. I mean there are many teachers in this building that are much better than I am. I just enjoy the kids" said David Stackpole.

"I can remember back in sixth grade what it felt like being a sixth grader and sometimes it wasn't pleasant. I had a teacher one time in high school. He went to the board and the first thing he said was, ahh we'll get somebody with half a brain to do the next problem and I thought of that and said I'd never be that way in the classroom" said Stackpole.

He said the biggest thing he works on in the classroom, is trying to engage every student.

"I try to do it with humor. I always thought teaching is really a lousy job, it really is. But it's a great profession...If you came in every day and said this is just my job...it is a pain. But if you thought of it as your profession that's something you're supposed to get better at everyday. That's why it's a great profession" said Stackpole.

Unlike other teachers, he makes Social Studies fun" said Michael Harris another student in Stackpole's class.

Stackpole said in his 40 plus years in teaching there is one moment that really stands out to him.

"There was an incident in basketball, it happened. It wasn't a bad thing at all. And the little girl came up to me and it was during a cheering season and she came up and gave me a great big hug, she said, Mr. Stackpole no matter what everything is alright. That meant a lot to me. Because the kids don't take things from one day to the next. It's gone, I just think the caring that they have. And they says kids don't care how much you know until they know how much you care. And that's what I try to live by. Really, it means a lot to me" said Stackpole.