Portland police held a press conference to answer questions about the findings of their independent review of their response to a Black Lives Matter protest. 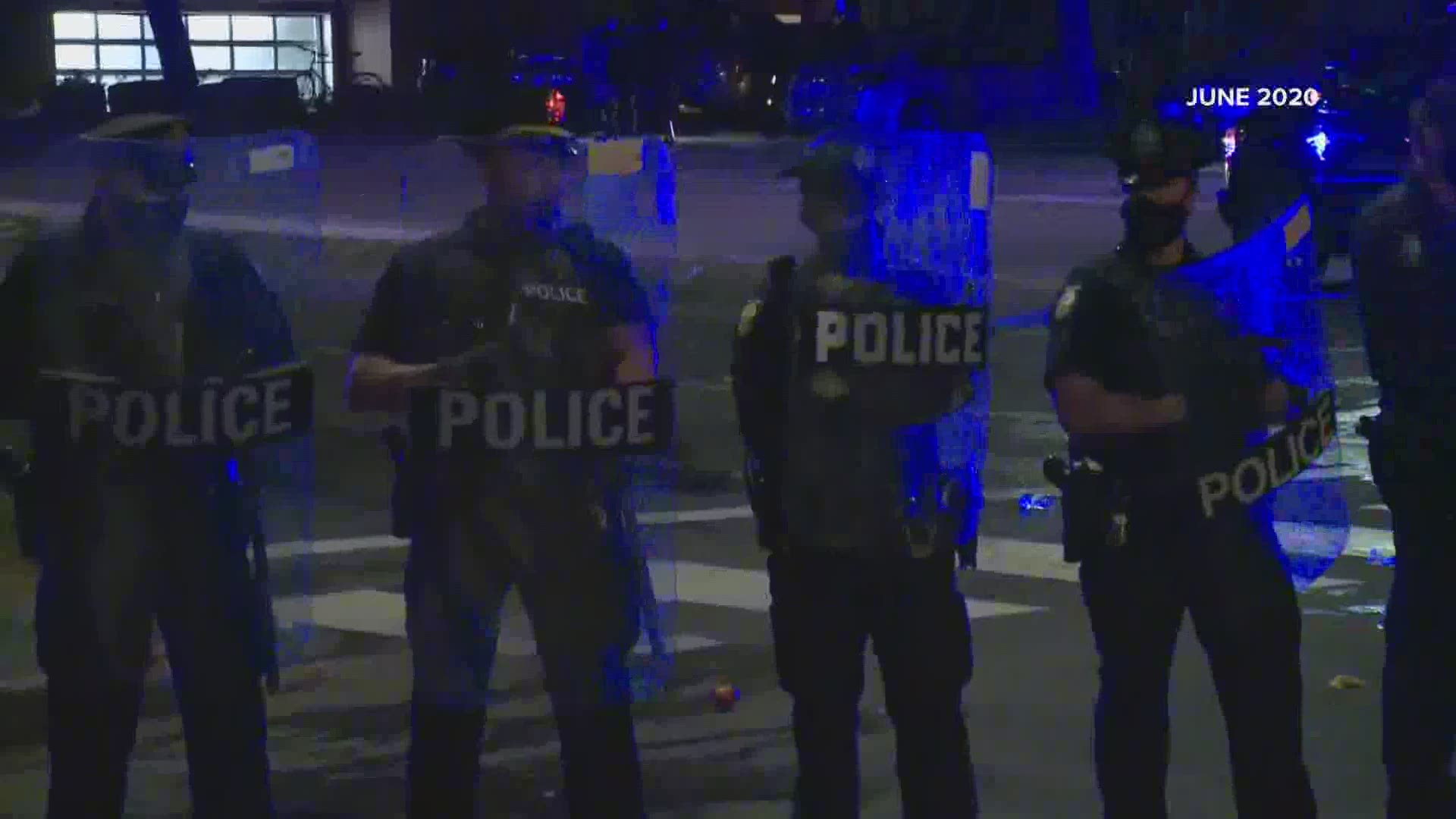 PORTLAND, Maine — The outside firm the city hired to investigate to Portland Police Department's response to a Black Lives Matter protest in June 2020 has completed its report, and concluded the response was "appropriate," and even "restrained."

Clifton Larson Allen LLP was hired by the city in February 2021 to investigate the June 1-2 protest that was held in the wake of George Floyd’s death. The protest ended in 23 arrests and damage to businesses in downtown Portland. The Cumberland County District Attorney later said the charges against the people arrested would not be pursued, citing insufficient evidence.

The protest, which was held just one week after George Floyd, 46, died in Minneapolis as a police officer knelt on his neck despite his cries that he couldn't breathe, started peacefully and became increasingly tense as night fell and police clashed with protesters in the streets.

Police in riot gear fired pepper spray into the crowd, and reports say officers advanced up Franklin Street after a cargo truck drove through the crowd. Protesters pushed back, and things divulged, at times, into chaos.

The firm found, however, that in many cases, officers showed restraint as events from the largely peaceful protest turned more hectic.

“Even under the best of circumstances with advance scheduling and coordination, policing protests can be difficult,” the firm said in its report.

The firm noted the protest was made up of a mix of peaceful demonstrators and outliers who clashed with police, throwing water bottles towards officers and inciting police reaction.

Police issued “orders to disperse” for more than an hour due to “riotous” conditions and then used pepper spray in pepper ball and aerosol canisters on protesters throwing objects at police. The outliers were met with calls from demonstrators attempting to keep the protest peaceful to stop antagonizing police.

It was this “second tier of demonstration” that officers’ actions were focused on, the firm concluded.

Compared to police departments’ response to similar protests across the country, the firm said Portland’s “differs greatly, in a positive manner.”

“A review of police responses from other cities frequently show a response strategy involving disorder control tactics and methods. Disorder control tends to rely on the use of mass arrests and shows of force and has a result of controlling, regulating, or quashing First Amendment expression,” the firm explained in the review.

The firm notes Portland Police demonstrated a “facilitation mindset” rather than using disorder control tactics and methods. Their review and evidence claimed that:

"While Black POWER was not involved in the organizing of the protests being examined in this 'independent report' (the cited protests taking place on June 1 & 2, 2020; Black POWER’s protest occurred on June 6th, 2020), PPD’s use of lethal force on protestors on June 1st was the catalyst for one of our principle demands for the city: to ban the use of lethal force on protestors. Black POWER stands in solidarity with all of our community members who exercised their legal right to gather and protest during the Uprisings of Summer 2020."

Clark said he was and remains today "extremely proud" of how his department and staff handled the situation last year in the face of "unprecedented challenges."

"We intend to continue to protect the city with integrity," he said, saying he thought officers responded with "discipline, restraint, and professionalism."

In conducting its report into the Portland Police Departments' response on June 1 into June 2, 2020, the firm worked to solicit and compile written concerns or complaints from individuals and conduct interviews with those who took part in the protest.

The firms also reviewed incident, arrest, after-action, and burglary and criminal mischief reports. That was in addition to reports by assisting agencies, dispatch logs, use of force reviews, and media coverage and social media posts of the rally.

“I’d like to thank CLA for thoroughly and independently investigating the events of June 1st into June 2, 2020. As was demonstrated last year in a workshop with the City Council, the report confirms the men and women of our police department performed their responsibilities under great duress in a professional and admirable way,” Portland City Manager Jon Jennings said in a statement Thursday. “I am very proud that the Portland Police Department long-ago embraced being progressive in its approach to working with the community, and has been a leader in utilizing modern programs and best practices.”

As noted in the report, Clark said the department works hard to protect the public, the city, and its officers and also works to facilitate and protect the First Amendment rights of peaceful protesters. Clark said the lack of communication between organizers and the department was frustrating, and that communication could have allowed police to help facilitate their right to peaceful protest.

The review process, as well as making the findings public, helps "build a bridge of trust" between the department and the community, Clark said.

He said, "We need to work with the community."

Clark said he hopes the report will bolster the community’s trust and confidence in the department, and he said the review process helped improve their response in subsequent protests.

“As noted last year, these officers have my full faith and support, and I was extremely proud of the way our staff faced some trying and unprecedented circumstances and violence with discipline, restraint and professionalism,” Clark said in a statement. “I remain honored to be part of such a professional and progressive organization. We’ll continue to seek out best practices, hold ourselves accountable, and do our jobs with overarching integrity, as we strive to protect the public and each other.”

As of 12 p.m. on Friday, Black Portland Organizers Working to End Racism (POWER) has not yet released a statement in response to the report.