President says former Gov. Paul LePage "in charge of figuring it out." 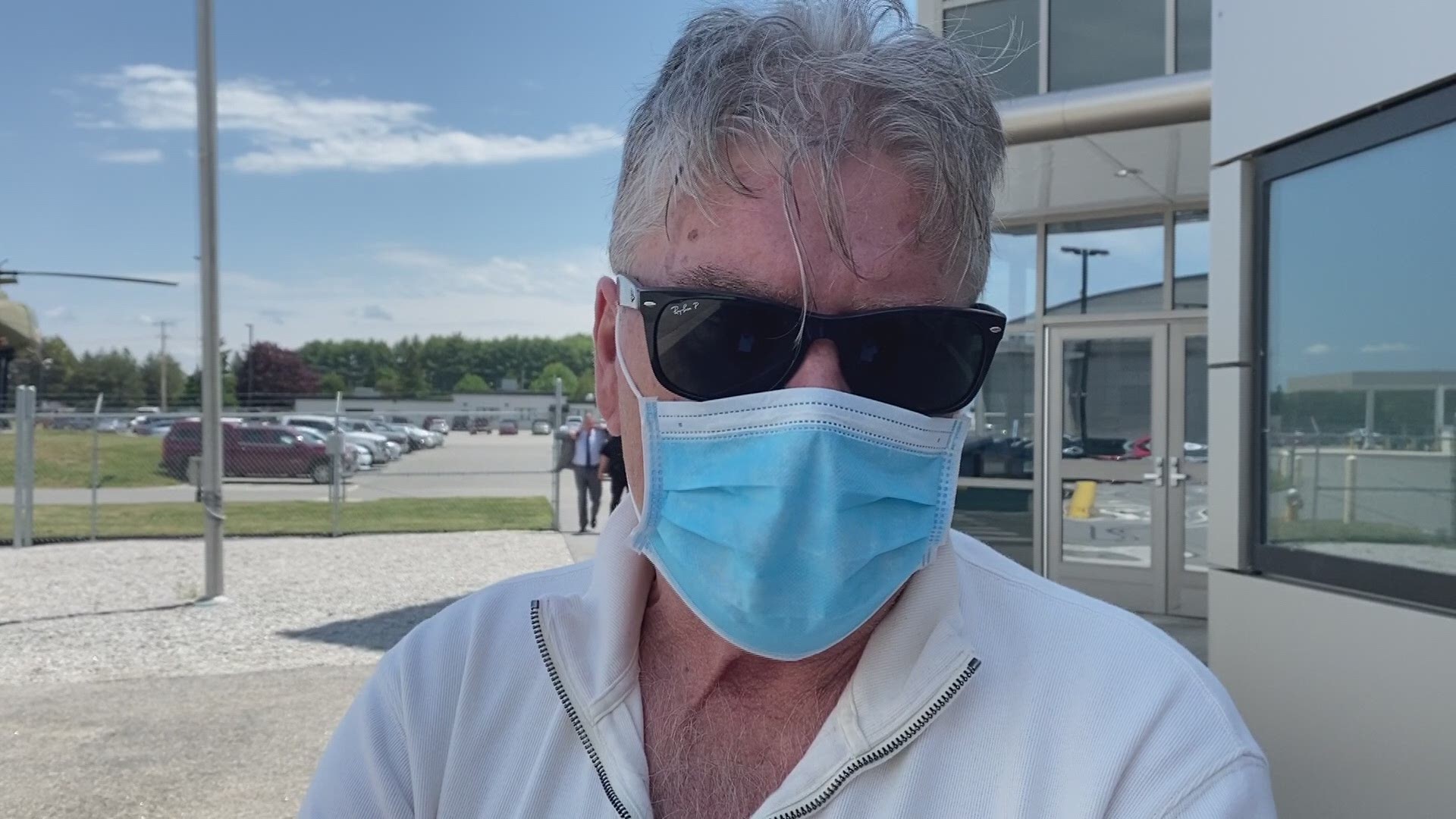 BANGOR, Maine — In Maine Friday to tour the Puritan Medical Products factory in Guilford, President Donald Trump met with leaders of the New England fishing industry to announce that he would rescind future protections of the Northeast Canyons and Seamounts Marine National Monument.

The area also includes fishing grounds like Cashes Ledge in the Gulf of Maine.

In a statement to NEWS CENTER Maine, Oceana, the largest international advocacy organization focused solely on ocean conservation, called Trump's proclamation "another nail in the coffin" for fisheries and healthy oceans in New England.

"This assault on our oceans joins the administration’s almost-daily actions to dismantle environmental protections for our nation’s air, water, oceans, historic treasures and wildlife—and to shut down public participation in decisions by our federal government. Another political attack on our environment will put the longevity of productive fisheries at stake unless this action is reversed immediately. Oceana will make sure that President Trump’s proclamation will not go unchecked," Brogan added.

In addition to LePage and U.S. Secretary of the Interior David Bernhardt, Trump met with Jon Williams, president of the Atlantic Red Crab Company in New Bedford, Massachusetts, who has a home on Westport Island; Frank O’Hara, president of O’Hara Corporation, which has fishing boats in Alaska and Maine, and the O’Hara lobbyist, Mary-Beth Tooley; Terry Alexander, a groundfisherman from Harpswell and member of the New England Fishery Management Council; Maggie Raymond, who represents Associated Fisheries of Maine; and Maine Lobstermen’s Association President Kristian Porter.

Maine Department of Marine Resources Commissioner Patrick Keliher was not invited to attend the meeting, nor were U.S. Sen. Angus King, Congresswoman Chellie Pingree or Congressman Jared Golden, according to their spokespeople.

A spokeswoman for U.S. Sen. Susan Collins did not return a request for comment.

“The President’s decision today to roll back the Northeast Canyons and Seamounts Marine National Monument designation won’t improve the prospects for our fishermen a fraction as much as reconsidering the tariffs that have wiped out years of time, toil, and energy invested by our seafood industry in developing new markets around the globe," King said in a statement. "To make matters worse, while other agricultural producers, who are suffering similar losses as a result of these trade wars, receive significant support – financial and otherwise – Maine’s seafood industry has largely been left to weather this storm alone. If the President truly wants to take action to help Maine fishermen, I’d urge him to start with those tariffs.”

Pingree issued the following statement after the roundtable was over:

President Trump spent much of his roundtable saying he could fix trade policies that have hurt Maine fishermen with the stroke of a pen, but it is his failed trade policies that caused China to retaliate with a lobster tariff. The congressional delegation wrote to him last June to help our fishermen and he did nothing.

President Trump had four years to meet with Maine fishermen who have been devastated by his reckless trade and commerce policies, but he did not. When Congress approved $300 million in COVID-19 relief money for the fishing industry, the Trump administration dragged its feet to release that money. Forget the fact that the President doesn’t have explicit legal authority to unilaterally open up a national monument for commercial fishing, this will be tied up in the courts for years. This move will not provide economic benefits to the fishing industry at a time when markets have been lost, the global supply chain is in shambles, and boats are tied up at the dock.

Fishing groups from Massachusetts, New York, Rhode Island and New Jersey were among those who opposed the monument, and sued twice to overturn the designation. Federal appeals courts twice upheld the designation, including a decision by a District of Columbia circuit court in December 2019.

In 2017, President Trump asked Interior Secretary Ryan Zinke to review more than 20 monuments including the Northeast Canyons, and Zinke recommended that all remain but that some could be altered, the Associated Press reported at the time.

On Friday, Bernhardt said to Trump, "You're taking down a no-fishing sign."

But the full weight of the federal protections weren't due to go into effect until 2023.

"I put Paul LePage in charge of trying to figure that one out, which you have figured out, I suspect," he said to LePage.

“Today’s proclamation is another nail in the coffin for both productive fisheries and healthy oceans in New England. Instead of addressing the critical issues facing our nation, President Trump just gave the green light to wreak centuries-worth of damage to deep-sea corals, seamounts, canyons, undersea volcanoes and sea life that depend on our Northeast Canyons and Seamounts Marine National Monument,” said Gib Brogan, Senior Campaign Manager at Oceana. “By allowing all fishing back in the Northeast Canyons and Seamounts and removing the phase out of the lobster and red crab fisheries, the hundreds of marine mammals that swim in the monument will be at increased risk of entanglement including the endangered North Atlantic right whale. And deep-sea coral and sponge gardens that are thousands of years old will lose protection from damaging fishing gear.

Protecting deep-sea waters is a win-win for both fishermen and healthy oceans, as healthy oceans from the seafloor to the surface will help sustain robust fisheries for years to come. The creation or expansion of the national marine monument does not restrict the amount of fish available to commercial fishermen, only the area in which boats can catch fish has been modified. Nothing indicates that fishing harvest has been harmed in the creation of any of the marine national monuments.

This assault on our oceans joins the administration’s almost-daily actions to dismantle environmental protections for our nation’s air, water, oceans, historic treasures and wildlife—and to shut down public participation in decisions by our federal government. Another political attack on our environment will put the longevity of productive fisheries at stake unless this action is reversed immediately. Oceana will make sure that President Trump’s proclamation will not go unchecked.”