The actions of Your T1 WIFI, which provides internet services to North Idaho and the Spokane area, could violate Washington state's Net Neutrality law. 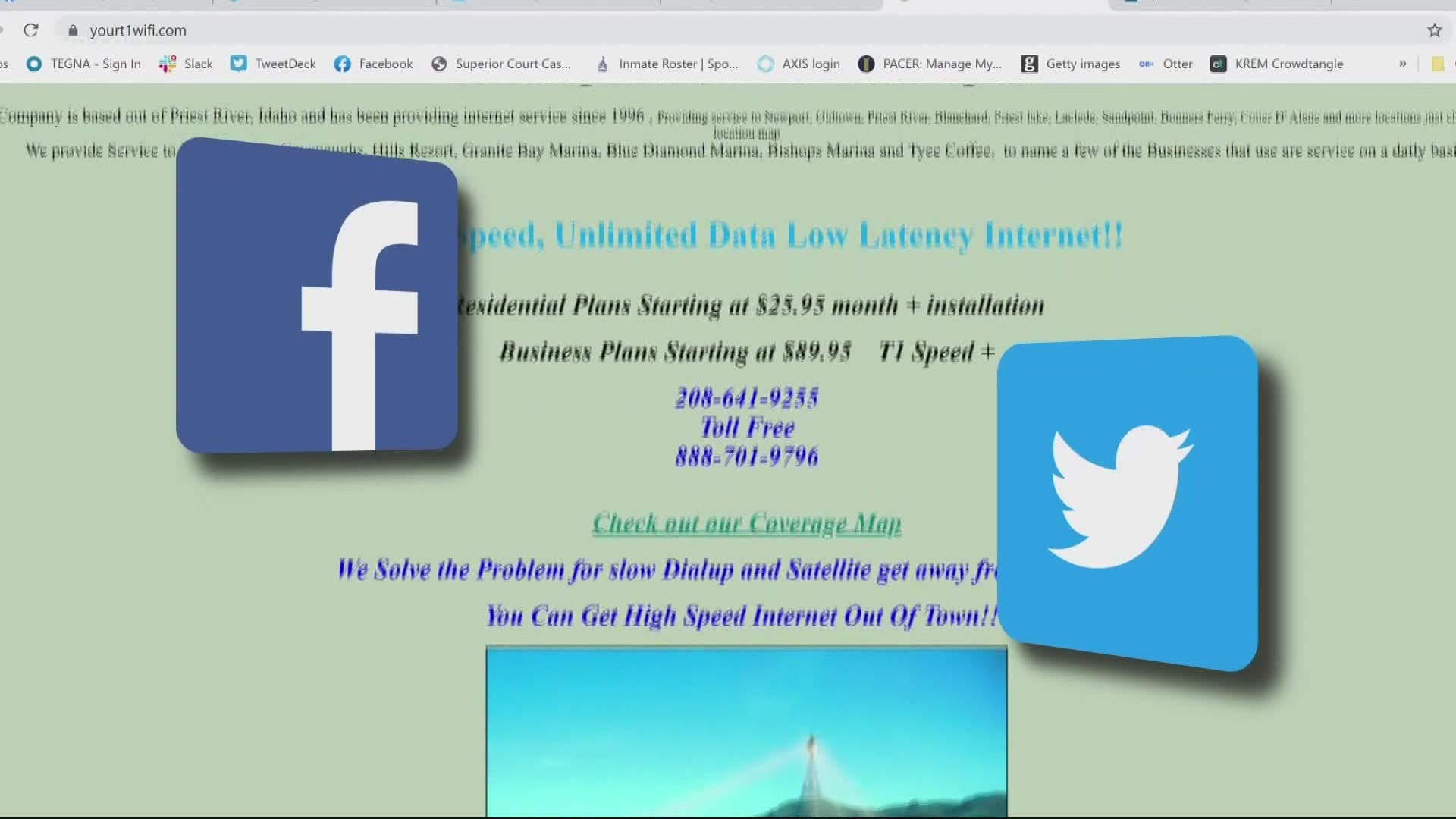 SPOKANE, Wash. — A North Idaho internet provider, Your T1 WIFI, confirmed it is blocking Facebook and Twitter from its WIFI service for some customers due to censorship claims.

Your T1 WIFI provides internet services to North Idaho and the Spokane area.

The move comes after Twitter and Facebook banned President Trump from their platforms due to incitement of violence and undermining the transition of power to President elect Joe Biden.

The social media sites banned the President due to violations of their terms of service. Because Twitter and Facebook are private companies, their bans on the President do not violate the First Amendment, which protects speech from being limited by the government.

Your T1 WIFI said it decided to block Twitter and Facebook after the company received several calls from customers about both websites.

"It has come to our attention that Twitter and Facebook are engaged in censorship of our customers and information," an email to customers reads.

The service provider said the change would go into effect on Wednesday, Jan. 13.

In an email posted to Twitter by a customer, Krista Yep, the company says it was fielding calls from customers asking that the service not display the sites on the internet, and that they didn't want their children to be able to access them.

"Our company does not believe a website or social networking site has the authority to censor what you see and post and hide information from you, stop you from seeing what your friends and family are posting," the email reads. "This is why with the amount of concerns, we have made this decision to block these two websites from being accessed from our network."

The company did not specify what complaints customers had made.

Yep said she found the company's email to customers alarming.

"I was pretty shocked that they were just coming out and saying that," Yep said. "If it's not illegal, it's highly unethical."

Credit: Krista Yep
T1 Your WIFI said it would block Facebook and Twitter on its internet service for customers who asked.

"Just because you don't like what Twitter and Facebook have done, then you decide to block it for everyone else, so in your opposition to censorship, you're going with censorship," Yep said.

Yep said she plans to cancel her service, regardless of the company's backtracking.

"Their original email was pretty alarming and I don't trust them anymore," she said.

Yep forwarded additional emails from the company to KREM. In them, the company states that two-thirds of customers asked for Twitter and Facebook to be blocked.

In the emails, the company also wrote that their contract and acceptable use policy allows them to block websites if they deem the content "break any rules (sic) or illegal or harmful to our customers and more."

In a phone call with KREM, the owner of the company again said the websites would only be blocked for customers who asked.

"We've had customers asked to be blocked by it. That is what the email was about, so no we are not blocking anybody, only the ones that have asked for it," Fink said.

While Your T1 WIFI says they acted in response to censorship, the company's actions could also be considered censorship. In addition, they may violate Washington state's Net Neutrality law, which states that internet providers may not manipulate access to content.

The law contains the following language:

A person engaged in the provision of broadband internet access service in Washington state, insofar as the person is so engaged, may not:
(a) Block lawful content, applications, services, or nonharmful devices, subject to reasonable network management;
(b) Impair or degrade lawful internet traffic on the basis of internet content, application, or service, or use of a nonharmful device, subject to reasonable network management; or
(c) Engage in paid prioritization

Idaho does not have the same net neutrality law. A representative for the Idaho Attorney General said their office lacks the original jurisdiction to be the enforcement authority in this matter.

KREM has also reached out to the Federal Communications Commission (FCC) for comment.