No matter the outlook, we should always prepare for hurricane season as it only takes one storm to make an impact. 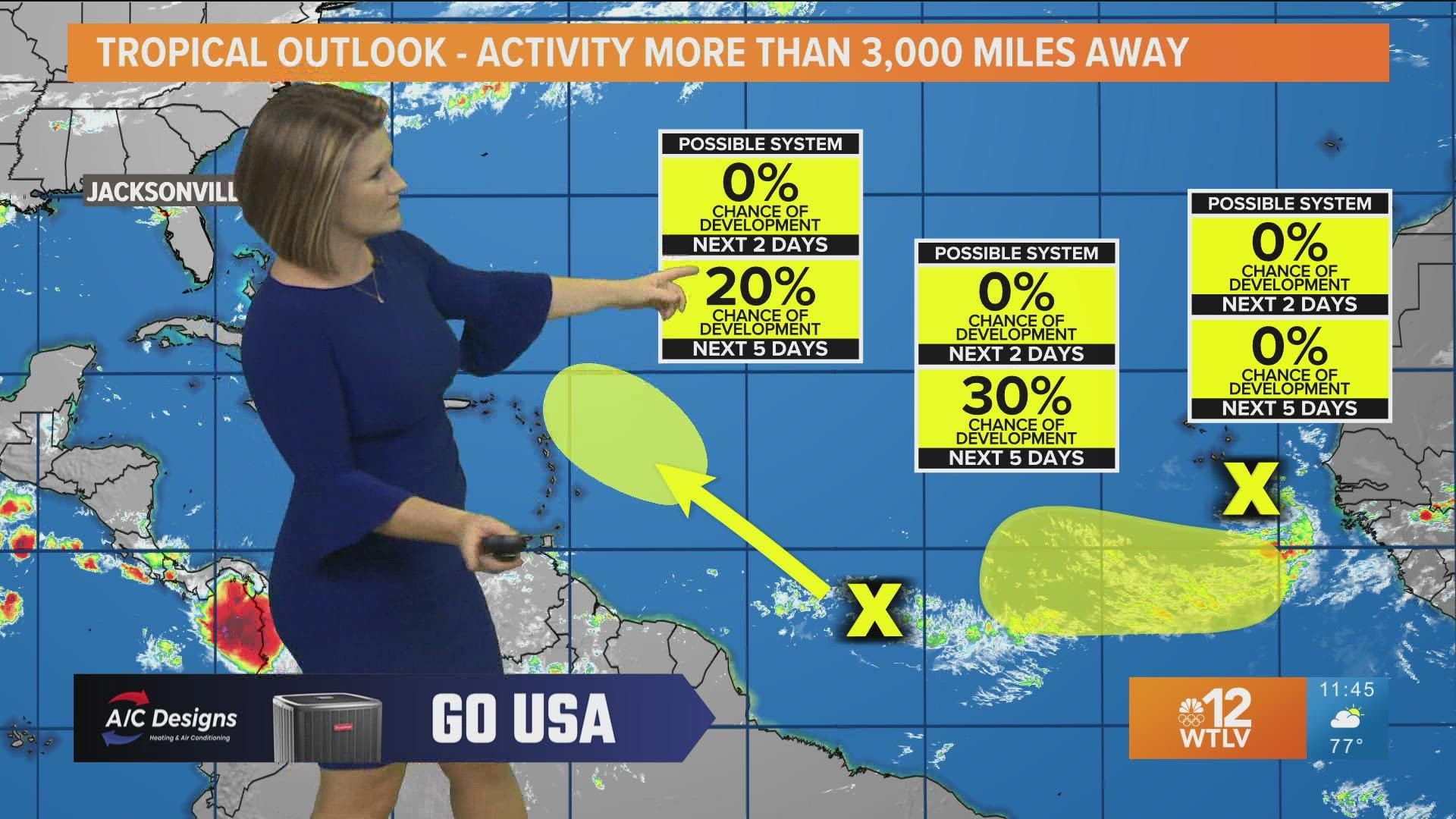 JACKSONVILLE, Fla. — The 2021 Atlantic hurricane season has already proven to be active with five names crossed off the list so far. The National Oceanic and Atmospheric Administration's outlook released their seasonal outlook update. These numbers reflect activity that's already occurred and what can be expected for the next few months.

“After a record-setting start, the 2021 Atlantic hurricane season does not show any signs of relenting as it enters the peak months ahead,” said Rick Spinrad, Ph.D., NOAA administrator. “NOAA will continue to provide the science and services that are foundational to keeping communities prepared for any threatening storm.”

“Now is the time for communities along the coastline as well as inland to get prepared for the dangers that hurricanes can bring,” said Secretary of Commerce Gina Raimondo. “The experts at NOAA are poised to deliver life-saving early warnings and forecasts to communities, which will also help minimize the economic impacts of storms.”

This forecast range is above the new 30-year average (1991 to 2020) of 14 named storms, seven hurricanes, and three major hurricanes.

NOAA based their outlook on several factors, including higher than normal Atlantic Ocean sea-surface temperatures, La Nina and other teleconnections, computer model forecast guidance, and past hurricane seasons with similar atmospheric conditions.

The 2020 Atlantic hurricane season proved to be one like no other with a record-breaking number of storms and U.S. landfalls. Forecasters had to turn to the Greek alphabet to name storms, which was only the second time in history.

“Although NOAA scientists don’t expect this season to be as busy as last year, it only takes one storm to devastate a community,” said Ben Friedman, acting NOAA administrator. “The forecasters at the National Hurricane Center are well-prepared with significant upgrades to our computer models, emerging observation techniques, and the expertise to deliver the life-saving forecasts that we all depend on during this, and every, hurricane season.”

While the 2021 season is expected to be busy, it may not be quite as hectic as 2020. Last year, the La Nina pattern was one of the strongest we had seen in a decade. This type of pattern, where the cooler Eastern Pacific waters produce weaker trade winds and less wind shear in the Caribbean Sea that would otherwise rip apart tropical systems, typically corresponds with a more active Atlantic hurricane season. However, current forecasts show a fading La Nina and a more neutral pattern.

A factor that may not come as much of a surprise is the above average sea-surface temperatures in the tropics. SSTs are, once again, above normal heading into hurricane season in the northern and central Gulf of Mexico, and also across the Atlantic Ocean and Caribbean Sea. The warmer the water, the more energy there is to fuel storms.

Steering currents will be something else to keep a close eye on this season. The position of the Bermuda high pressure center across the Atlantic Ocean could make for a more or less impactful year for the Sunshine State, and U.S. East Coast as a whole. This high-pressure area was strong last year and helped force more storms away from the East Coast into the Caribbean and the Gulf of Mexico. This year, the Bermuda high may not maintain its strength the entire season which would promote storms to recurve at a greater frequency through the western Atlantic. Recurving storms have a greater chance of impacting the East Coast.

We must treat every season the same because there is always a risk living on the coast. Always remember to never judge a storm based on its category, too. Now is the time for you to formulate a hurricane safety plan, gather emergency supplies, and study up on evacuation routes and nearby shelters.

Reason #1 on why you never judge a tropical system by its category. #FCNStorm pic.twitter.com/axEqHmLcvt

NOAA’s Climate Prediction Center (CPC) announced 1991-2020 as the new 30-year period of record earlier this year. The updated averages for the Atlantic hurricane season increased from 12 to 14 named storms and six to seven hurricanes. The average for major hurricanes (Category 3, 4 or 5) remains unchanged at three.

The official start to the Atlantic Hurricane Season is June 1, but we've seen a tropical or subtropical system develop before then for the past consecutive six years.

VIDEO: In 2019, Meteorologist Lauren Rautenkranz had the opportunity to fly into the eye of Major Hurricane Dorian as it was approaching the Bahamas.