Historic 'Mary E' schooner capsizes in Kennebec River in Bath; police say more than a dozen passengers all accounted for 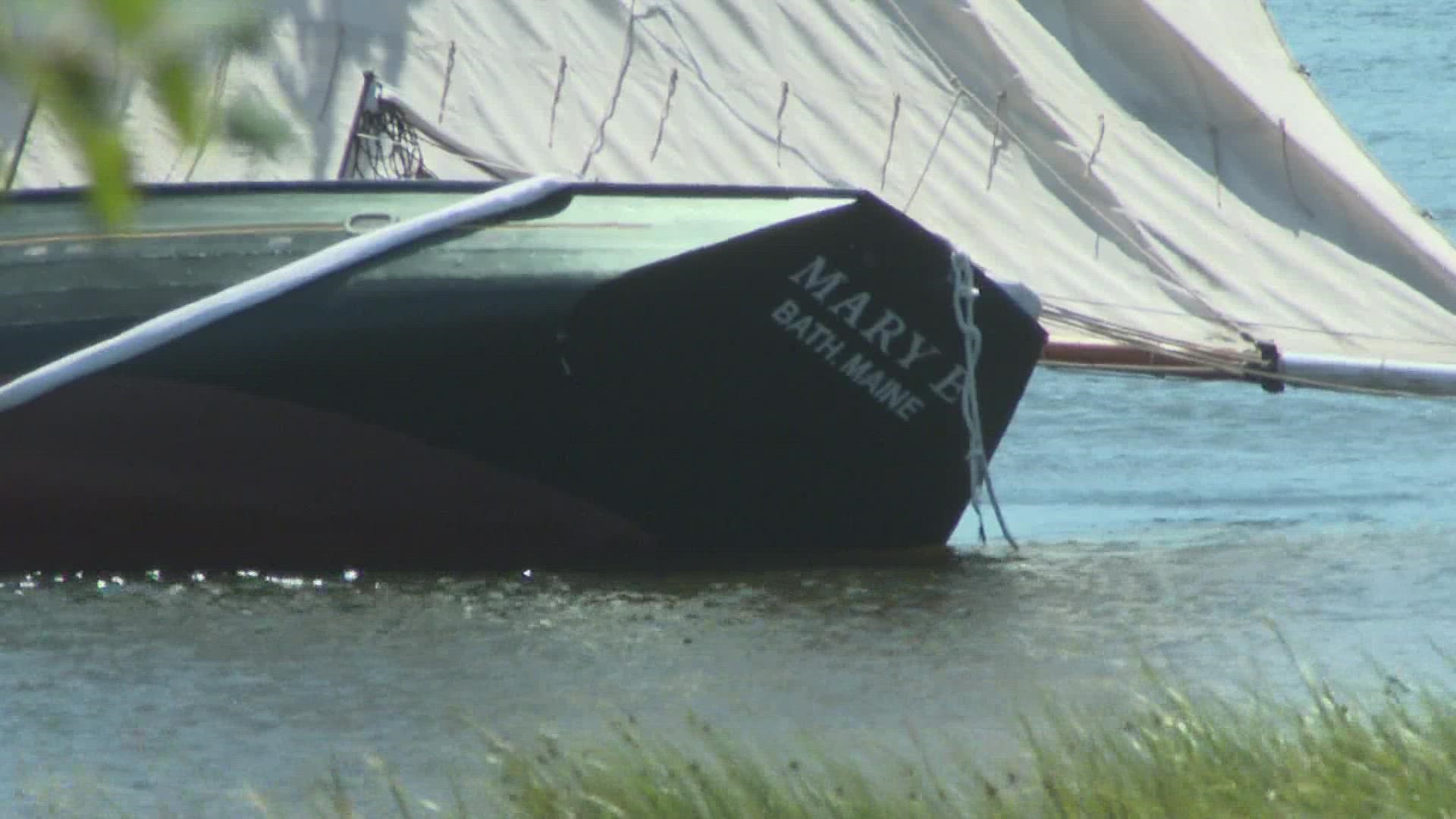 BATH, Maine — Bath Police say the historic schooner "Mary E" capsized in the Kennebec River Friday afternoon with more than a dozen people on board.

The Coast Guard is investigating how the ship capsized, but police said 15 passengers and three crew were on board and have all been rescued and are back onshore, safe and accounted for. One woman was taken to the hospital as a precaution.

Brunswick Police said their drone was requested to the scene, and that a Bath Iron Works rescue boat also responded.

The Bath harbormaster was on the scene waiting for the Coast Guard to take over the investigation.

Bath Police said the boat is still in the water. It is unclear how deep the water was at the time the boat capsized.

The chief said the "Mary E" is typically docked at the Maine Maritime Museum.

According to the museum's website, in December 2016, the board of Maine Maritime Museum approved the acquisition of Mary E. In spring of 2017, she arrived at the museum, and restored in the historic Percy & Small Shipyard from 2017-2018. She was relaunched in the Kennebec River in 2018. The schooner is on the National Register of Historic Places and the only Kennebec-built schooner still afloat.

According to the museum's website, the Mary E was scheduled to go on a 2.5-hour river sail starting at 4 p.m. The ship was scheduled to pass by the site of the Thomas E. Hagan yard where Mary E was built in 1906, as well as Doubling Point Light and the Kennebec Range Lights, and Bath Iron Works. It is unclear at what point in the voyage the ship capsized.

The incident is under investigation.

"At this time we are working to determine what factors may have contributed; we will provide more information as it becomes available. We are grateful for the rapid response of the crew and the multiple agencies that assisted in quickly bringing those aboard to shore," said Katie Spiridakis, Marketing and Communications Manager for the Maine Maritime Museum.

What started as a beautiful sailboat ride along the Kennebec River quickly took a dangerous turn. A historic schooner capsized with 18 people on board. All were rescued. Hear from one passenger who managed to capture video of the incident at 5. @newscentermaine pic.twitter.com/iwmEcRgmXa

One man who was aboard the schooner when it capsized captured the incident on video. In the video Peter Nordlander took on his cellphone, passengers can be seen wearing life vests and clinging to the boat as help arrived.

Nordlander said the boat began to tilt as the wind increased, and eventually water started coming up over the railing. But he said he was never scared and the boat sank "very slowly."

All 18 people were rescued and brought to shore.

Watch Nordlander's video below (Warning: The video contains language that some may find offensive).

RELATED: 'I was never scared': Passenger aboard historic schooner captures video as it sank in Maine river