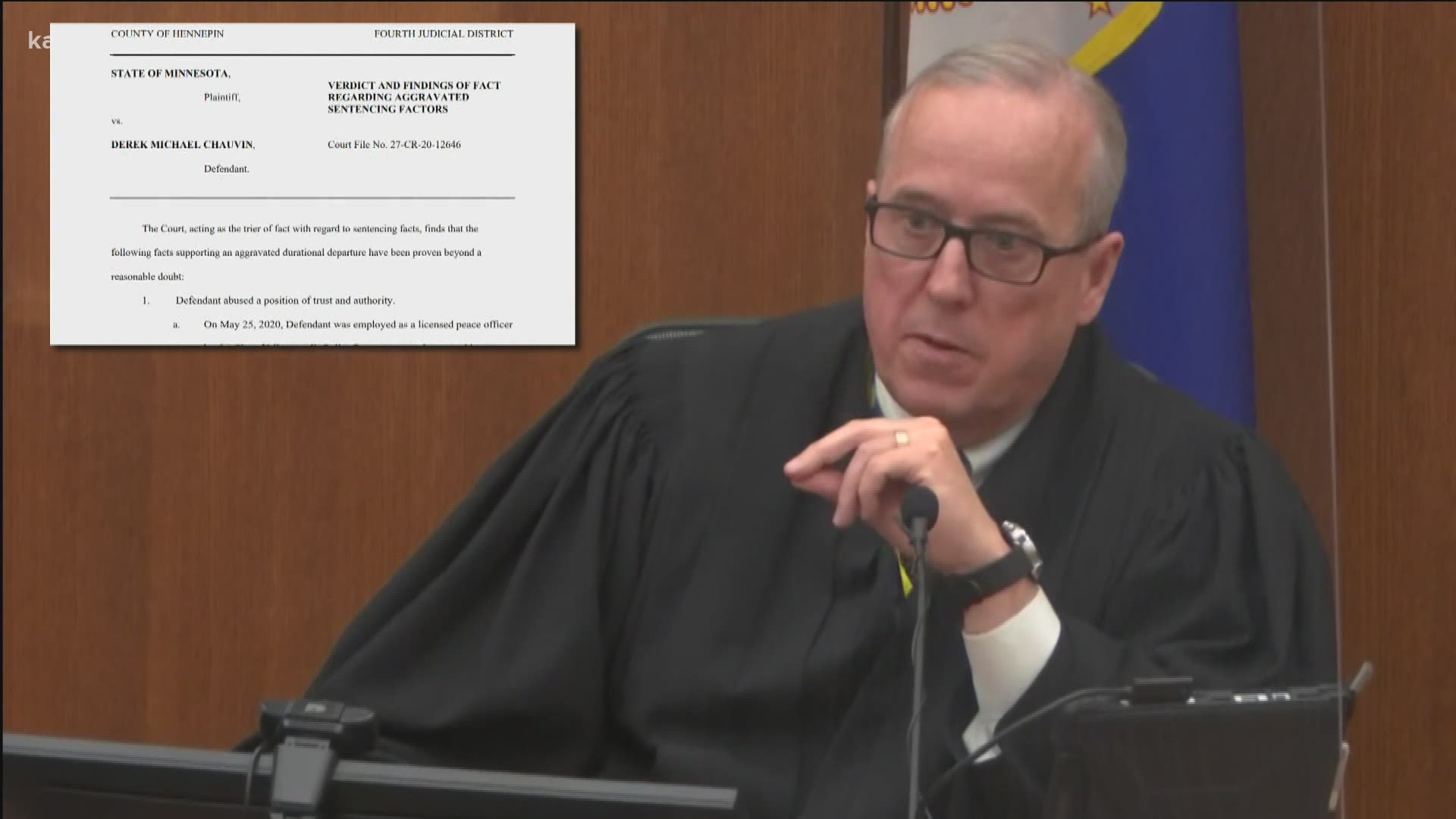 MINNEAPOLIS — Court documents filed Tuesday in Minneapolis suggest that former police officer Derek Chauvin may face a longer sentence than recommended by state guidelines after being convicted of murder in the death of George Floyd.

Chauvin is scheduled to be sentenced June 25 after a Hennepin County jury found him guilty of second and third-degree murder, and second-degree manslaughter after he knelt on Floyd's neck for more than nine minutes.

A finding of fact verdict from Judge Peter Cahill lists four facts that support a tougher penalty than the 12 and a half year sentence that normally accompanies a second-degree murder conviction.

Cahill found one fact that was not proven beyond a reasonable doubt, that Floyd was particularly vulnerable during the detainment that eventually caused his death.

“We appreciate the court agreed with our assessment of the aggravating factors. The particular cruelty of Derek Chauvin's conduct, his abuse of authority with his fellow officers and the impact of this crime on the minors who had to witness it require a sentence that holds Mr. Chauvin sufficiently accountable,” said Minnesota Attorney General Keith Ellison.

Without aggravating factors, Cahill could have used his discretion to hand down a sentence as short as 10 years and eight months, or as long as 15 years on that charge. After Tuesday's filing it is now possible Chauvin could be sentenced to the statutory maximum of 40 years in prison.

“We applaud Judge Cahill for ruling that four of five aggravating factors were proven beyond a shadow of a doubt, which could significantly and appropriately lengthen his sentence," said civil rights attorney Ben Crump, who is represents the Floyd family. "Clearly, Chauvin abused a position of trust, treated George Floyd with particular cruelty, and committed the crime in the presence of children and with the active participation of at least three other people -- the other officers still to be tried. The application of justice in this case offers hope that we will see real change in the relationship between police and people of color by holding officers properly accountable for egregious behavior and for failing to honor the sanctity of all lives.”

The former officer's legal challenges do not end once state sentencing is completed. Chauvin, Lane, Kueng and Thao have all been indicted by a federal grand jury for depriving Floyd of his civil rights in causing his death.