Donald Williams can be heard on bystander video telling officers to check Floyd's pulse. Here's what he said in court. 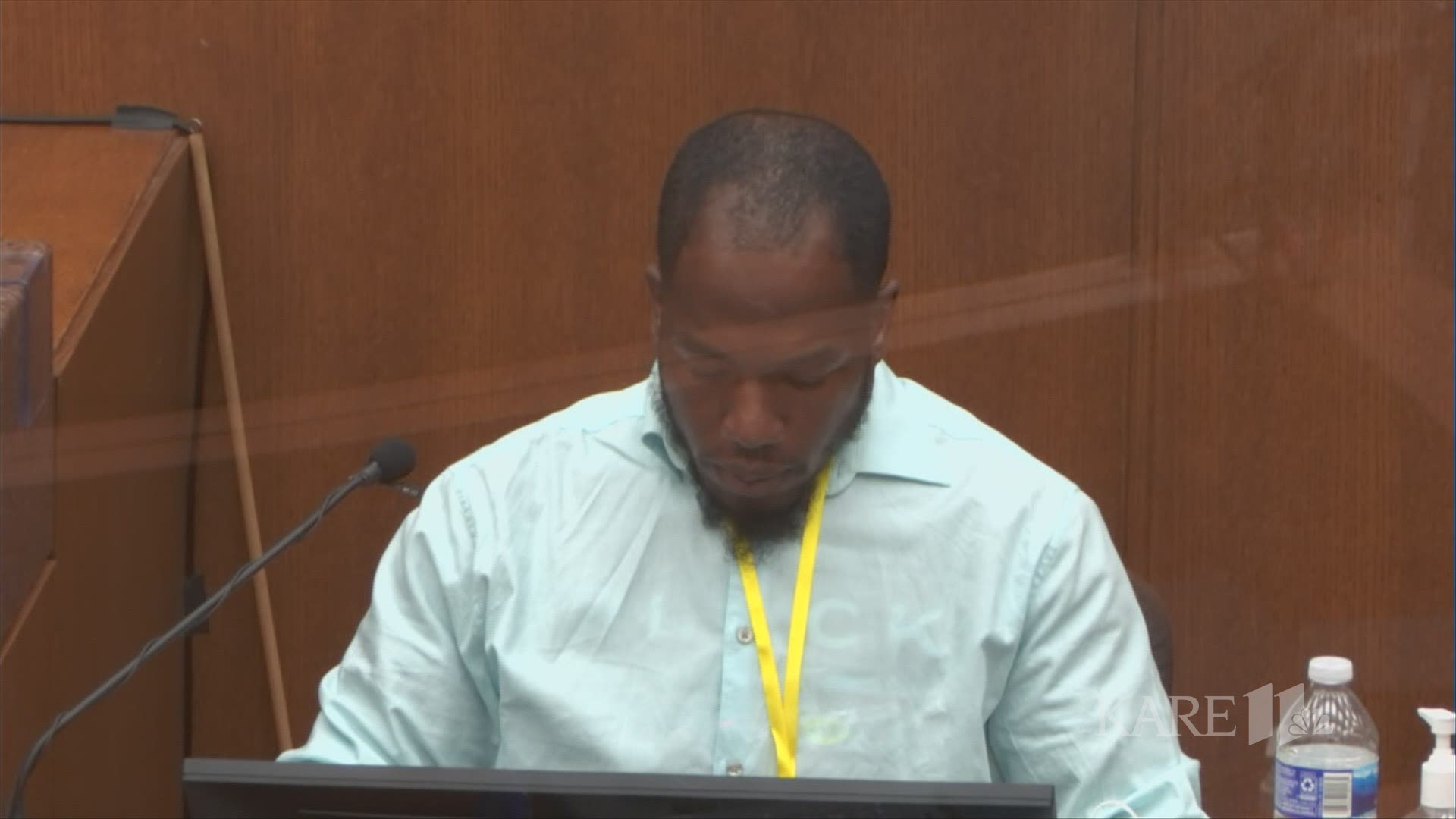 MINNEAPOLIS — Editor's note: This article includes witness statements about George Floyd's death, which could be upsetting to read.

The state's third witness in the murder trial of Derek Chauvin was Donald Wynn Williams II, a professional mixed martial arts fighter who witnessed the death of George Floyd.

Williams, who also has a background in security, can be heard on bystander video forcefully telling officers to check Floyd's pulse. After seeing Floyd taken away via ambulance, he called 911 -- a call that made Williams visibly tear up when it was played in court. You can watch that part of testimony here.

"I did call the police on the police," he said during direct examination. "Because I believe I witnessed a murder." In the recorded 911 call Williams can be heard telling the operator that Chauvin "pretty much just killed this guy that wasn't resisting arrest."

Williams also told the court he recognized Chauvin's hold on Floyd as a "blood choke," which cuts off blood circulation rather than restricting the airway.

"You could see that he was going through tremendous pain," he said during direct examination. "You could see his eyes slowly rolling back in his head and him having his mouth open."

Williams' name began trending on social media, with many watchers impressed by his demeanor and responses during cross-examination by defense attorney Eric Nelson.

Nelson's questioning focused significantly on Williams' statements recorded in the bystander video. He recounted the things that Williams called the officer and asked whether Williams got angrier and more upset throughout the interaction. Williams acknowledged that he grew more upset, but said he stayed controlled and professional.

Nelson then asked about a statement Williams made to law enforcement agents, that he had wanted to "beat the (expletive) out of the police officers."

"You said that?" Nelson asked.

"No. You can't paint me I was angry. I was in a position where I had to be controlled -- controlled professionalism." Williams continued, but Nelson objected that the answer was non-responsive.

The judge overruled, and Nelson moved on to the next question.

Later, in redirect by the prosecution, Williams clarified why he grew more upset: he said the officers weren't listening to him, and he wanted to speak out for Floyd.

Frank: Was there a time you saw Mr. Floyd loose consciousness

Williams: That is correct

MF: Why did you get angry and more and more upset as time went on?

DW: They weren't listening to anything i was telling them. I felt i had to speak out for Floyd... No feedback, emotion

During cross-examination, Nelson also questioned Williams about blood chokes and his MMA background. Nelson said in a blood choke, blood supply is cut off to both sides of the neck. Williams disagreed, saying the choke uses one side.

Asking him about his MMA experience.

NELSON: In fight, does Ref lifts arm to see if conscious or not?

Williams agrees with him.

On redirect, prosecutors emphasized the differences between MMA fighting and what Williams witnessed. Prosecutor Matthew Frank asked whether anyone is handcuffed or outnumbered in MMA, and Williams said no. He pointed out that if a person is choked out in an MMA fight but regains consciousness, that person gets medical attention "right away."