Minneapolis police lieutenant: Chauvin's use of force on Floyd was 'totally unnecessary'

"If your knee is on someone's neck, that can kill them," Lt. Richard Zimmerman told the jury Friday. 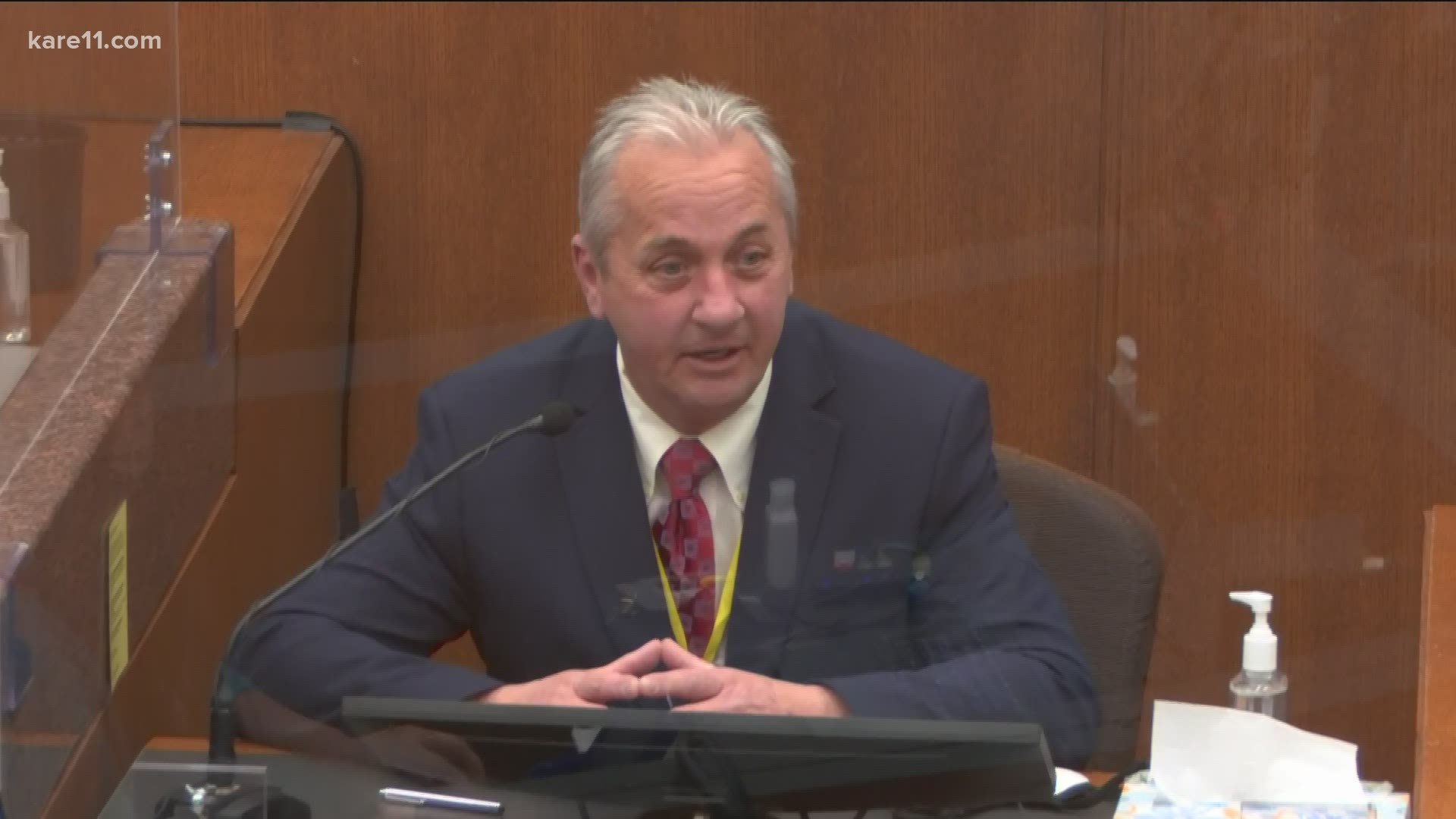 Lt. Richard Zimmerman testified in Chauvin's trial Friday about his more than three decades of police training and the dangers of the techniques that were used on Floyd last May.

The prosecution called Zimmerman to the stand as its second witness of the day. He's been an officer with the Minneapolis Police Department since 1985, making him the longest-serving officer on the force.

Zimmerman responded to the scene where Floyd was arrested, at 38th and Chicago, after Floyd was taken to the hospital on May 25, 2020. But his most striking testimony came when the state prosecutor asked him about use-of-force training at MPD.

"Once you handcuff a person you need to get them out of the prone position as quickly as possible, because it restricts their breathing," Zimmerman said.

Zimmerman added that being handcuffed "stretches the muscles back through your chest and it makes it more difficult to breathe."

According to Zimmerman's account of his police training, officers are taught to turn the person put into the prone position on their side and get them off their chest. "If you're laying on your chest, that's constricting your breathing even more," he said.

He told the jury that he has been trained in the dangers of the prone position since 1985. But Zimmerman said he has never been trained to put his knee on someone's neck while they are in that position.

"That would be the top tier, the deadly force," he said. "Because if your knee is on someone's neck, that can kill them."

Zimmerman said he has watched bystander and police body camera video of George Floyd's arrest and restraint. Frank asked him what he thought of the force used by Chauvin, and the length of time it was used.

"Totally unnecessary," he said. "First of all, pulling him down to the ground facedown and putting your knee on the neck for that amount of time is just uncalled for. I saw no reason why the officers felt they were in danger, if that's what they felt. And that's what they would have to feel to use that type of force."

"In your opinion, should that restraint have stopped once he was handcuffed and prone to the ground?" Frank asked.

Wow. Zimmerman testifying that trained since 1985 of dangers of prone position.

The importance of getting the suspect off their chest.

Effective for the prosecution.

Nelson will try to go to work once he gets to cross.

Zimmerman's name was on an open letter to the public from 14 Minneapolis police officers, written after Floyd's death. In that letter they said they "wholeheartedly condemn" Chauvin's actions.

When Frank asked him to speak to the Minneapolis Police Department use-of-force policy, Zimmerman explained the "use-of-force continuum."

"The use-of-force continuum is guidelines, or it's policy actually, that we have to follow," Zimmerman said. He described the levels, beginning at the lowest.

Officers can skip to a higher level in the continuum depending on the threat.

Zimmerman also told jurors that once someone is in handcuffs, the threat they pose has diminished, and that the individual's "well-being is your responsibility" as an officer.

Zimmerman said a person being handcuffed changes the level of force that can be used.

Zimmerman said once a person becomes less combative, the use of force should change as well.

"If they become less combative, you may just have them sit down on the curb," he said. "The idea is to calm the person down and if they are not a threat to you at that point, you try to, you know, to help them so that they're not as upset as they may have been in the beginning."

Zimmerman also said officers are "absolutely" trained to provide medical assistance to a person in distress, even if an ambulance has been called.

Upon cross-examination, Chauvin's defense attorney Eric Nelson questioned Zimmerman about use of force in a scenario where your life is in jeopardy.

"In a fight for your life, you as an officer are allowed to use whatever force is reasonable or necessary, correct?" Nelson asked. "And that can even involve improvisation?" Zimmerman agreed.

Zimmerman agreed that use of force is "a dynamic series of decision-making based on a lot of different information" and some of it may not be captured on a body camera.

Beyond his experience and training as an officer, Zimmerman also offered insight into how police handled the scene where Chauvin knelt on Floyd's neck, after Floyd was taken to a hospital.

The lieutenant told the jury that he responded to the scene later that night, and had told a sergeant securing the area to bring in more officers. He also spoke with then-officers Thomas Lane and J. Kueng.

Lane and Keung are among the three other officers facing aiding and abetting murder and manslaughter charges, for failing to act as Floyd struggled to breathe.

Zimmerman said he eventually turned the scene over to the Minnesota Bureau of Criminal Apprehension.