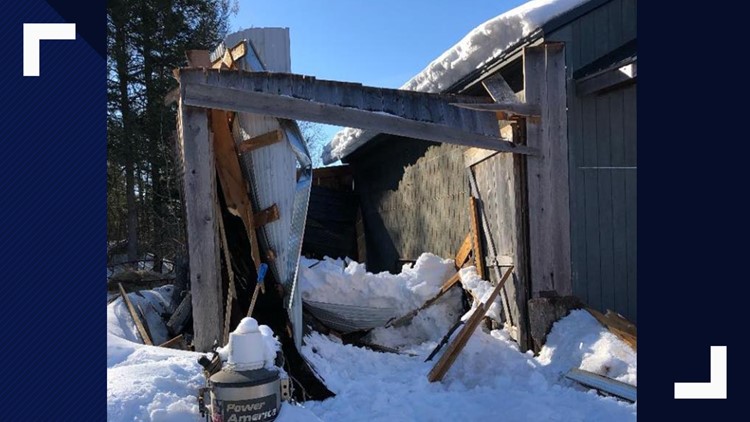 Photo by: Casco Fire and Rescue

CASCO, Maine — Firefighters and Cumberland County Sheriff's deputies shoveled a man out from under three to four feet of snow after a barn collapsed on him in Casco.

Deputy Chief Jonathan Morrison said there was about two to three feet of snow on the roof , causing it to collapse on the man inside the barn off of Edes Falls Road. He said it happened around 2 p.m. and that the man was trapped under the snow and rubble for about 30 minutes to an hour.

Morrison said the 57-year-old man inside was the owner of the barn.

"He was trying to gain access to it when he heard a crack and the roof came down on him," said Deputy Chief Morrison.

He said a neighbor came by and found the man and called 911.

All three departments used what Morrison called "airbags," pieces of equipment that firefighters carry with them for instances similar to this. Morrison described the equipment as "a hard, inflatable plastic capable of lifting several thousand pounds."

He said firefighters used those to lift the collapsed barn off the man and get him out from underneath it.

They loaded him into an ambulance and brought him to the Casco Central Station, where he was later taken by Life Flight to Central Maine Medical Center.

Morrison said he is in stable condition with what Morrison called "non-life threatening injuries," but that he likely was suffering from at least mild hypothermia due to his exposure to the snow.