This week's Fetch ME a Home featured pet is none other than pup Stephanie Gostkowski from Animal Refuge League of Greater Portland! 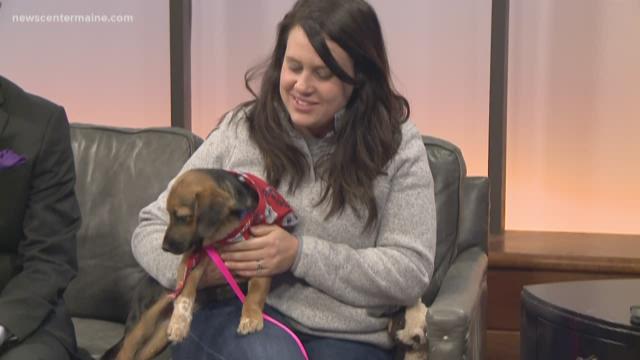 PORTLAND, Maine (NEWS CENTER Maine)-- This week's Fetch ME a Home featured pet is none other than pup Stephanie Gostkowski from Animal Refuge League of Greater Portland!

This little gal is a four-month-old mix from Georgia whose strong legs reminded her handlers at the shelter of the New England Patriots' own placekicker, Stephen Gostkowski. Stephanie loves to snuggle as much as she loves to play. Since her breed mix is unknown, it's unclear how big she will grow to be. However, we think you'll have enough room in your heart for her no matter what size she is.

Fetch ME a Home airs every Saturday on the Weekend Morning Report. If you're interest in adopting other pets, you can do so at any of these other animal shelters near you: The Ark, New Hampshire SPCA, Kennebec Humane Society, Coastal Aroostook Humane Society, PAWS, SPCA of Hancock County, Cocheco Valley Humane Society, Animal Refuge League of Greater Portland, Lucky Pup Rescue, Coastal Humane Society, Maine Chinchilla Shelter, and Animal Welfare Society.