This one school in Maine was heard loud and clear — without saying a single thing. 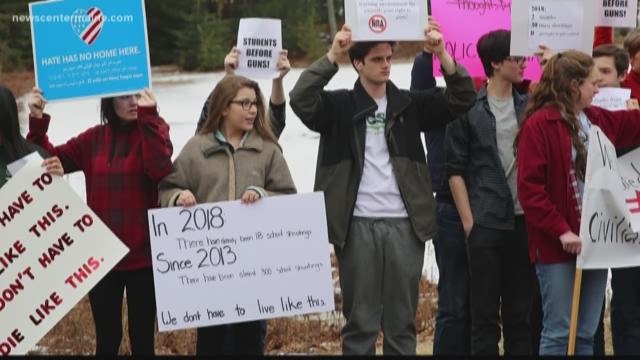 BAR HARBOR (NEWS CENTER Maine) — Students at one Maine high school have had enough of gun violence in America.

Students at Mount Desert Island High School in Bar Harbor were scheduled to have an active shooter drill early Thursday morning. Administrators had decided to postpone the exercise to a more appropriate time. Without knowing about the postponement, students took their own action.

According to teachers, Dawson Burnett and MacKenzie Miller, 17, were upset after Wednesday's shooting in Florida. They decided their voices needed to be heard — by not using them.

The two MDI students organized a silent protest instead of the shooter drill. Students walked silently across the gym, carrying signs that read: "The Second Amendment Must Be Amended," "Put Senate in Lockdown until Students are safe," and "Our Right to a Safe environment far exceeds your right to guns."

The students then lined the halls of MDI High School and stood silently for a few minutes.

Miller said there were about 20 students committed to the demonstration in its planning stages. By the end, they had a group of 90-100.

Later in the afternoon, students along with INDIVISIBLE MDI, a local progressive movement chapter, staged a separate demonstration outside of the school on a nearby road.

Miller said being part of the silent protest was moving, empowering and inspiring.

"It shows how strongly we feel that there needs to be change," she said. "We as high schoolers are scared, and we'd like to see change."

Teachers that witnessed the protest were proud of their civic awareness.

"This morning's protest was completely student-driven," said math teacher Sara "Bo" Greene. "Dawson Burnett thought of it, and then he and [senior] MacKenzie Miller did a huge group chat and got kids involved. Dawson, he was the genius of the protest. What a great kid."

"I'm so proud of them for standing up for what they believe in," Green said. "We must teach young people to use their voices."

The protests came on a tough day in schools across America, having to deal with the tragedy they had all seen happen Wednesday in Parkland, Florida.

Miller said she and her fellow students just want to feel safe.

"Enough is enough," she said. "We're sick of seeing it – it's high school students. It's scary to see that it can happen anywhere at anytime."

This one school in Maine was heard loud and clear — without saying a single thing.