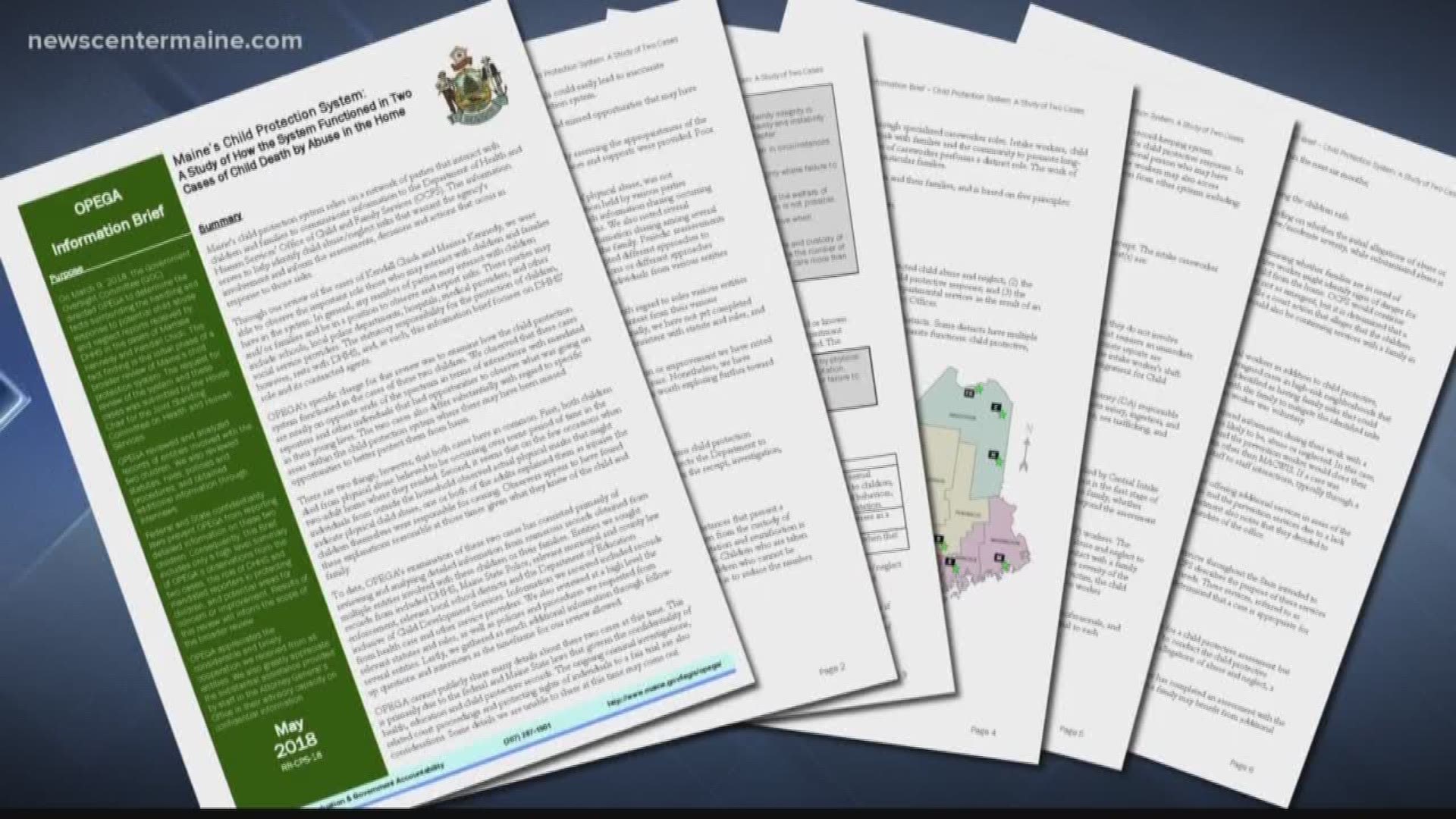 AUGUSTA (NEWS CENTER Maine) – Maine’s Office of Child and Family Services (OCFS) “failed to follow policies and procedures” in one of two horrific child abuse cases, according to a report released Thursday by the Office of Program Evaluation and Accountability (OPEGA).

The report reads that in one case, OCFS failed to stay “engaged with the child and family to ensure needed services and supports were provided.” It does not identify whether this happened in the case of Marissa Kennedy or Kendall Chick. 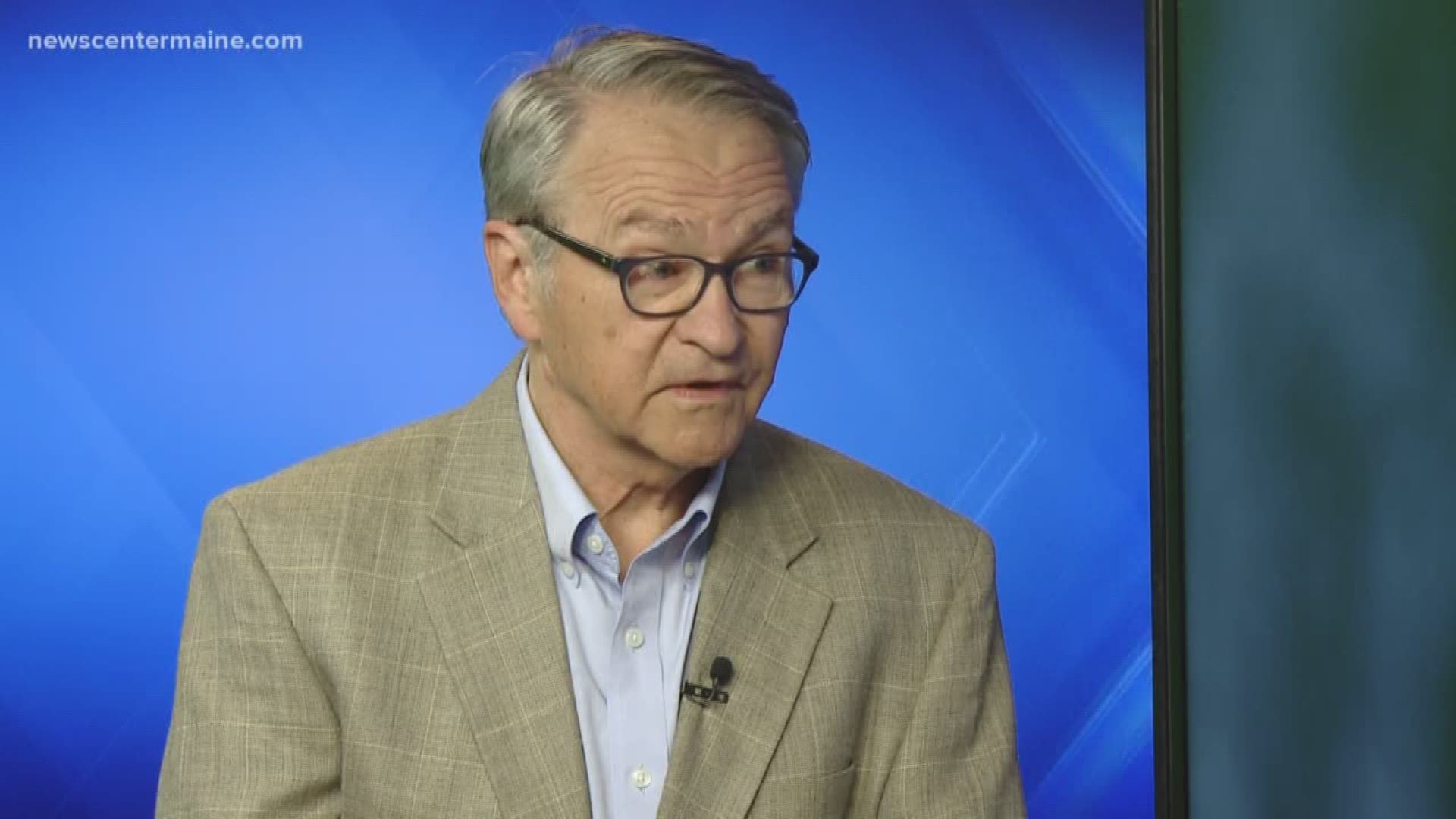 The young girls were murdered months apart. Their caretakers are charged with the crime.

RELATED ► Marissa Kennedy and Kendall Chick died of horrific abuse. How can we make sure this never happens again?

OPEGA is Maine's watchdog entity. In March, it was tasked with analyzing the Department of Health and Human Services' handling of two horrific child abuse cases that ended in murder. Maine's Attorney General Janet Mills said an OPEGA investigation would be an avenue for the public to learn what happened to Marissa Kennedy and Kendall Chick.

Unexpectedly, confidentiality laws and the right to a fair trial have severely impeded OPEGA's ability to be transparent, according to Director Beth Ashcroft. The report released Thursday speaks in general terms and does not identify specifics in either case.

"It is notable that there is not a single fact about either of these cases in this review," said Senator Roger Katz. "That's unacceptable for us." He explained the Legislature's desire to bring the information about Marissa and Kendall to the public. "I don't think we should be terribly interested in the privacy rights of these parents who allegedly caused these kids' deaths," he said.

Katz said he is grateful for OPEGA's work, and believes the organization is operating with "two hands behind its back," thanks to the push for confidentiality by DHHS and the Attorney General's Office.

According to the report, “poor job performance and inadequate supervision" by DHHS were factors in the department's mishandling of Kendall and Marissa's cases.

The report outlines general policies and procedures of Child Protective Services, and whether or not these were followed. It is the first of two reports that OPEGA will produce.

Caseworkers and observers also failed to recognize physical abuse, according to the report. On more than one occasion when people outside of the home observed physical marks on the children, “one or both of the adults explained them as injuries the children themselves were responsible for causing.” Observers mistakenly found these excuses to be reasonable, when in fact, the marks did indicate physical abuse, according to the report.

OPEGA found that there was “no lack of individuals” trying to make a difference in these kids lives, but communication overall between these different individuals needed improvement in order to ultimately save the two girls.

The report outlines areas that Maine’s Department of Health and Human Services has self-identified for improvement as a result of its internal review. The department plans to add a clinical psychologist to its team to help with cases of emotional or physical abuse. It will now automatically consider a case “appropriate for assessment” after three reports of child abuse that earlier would not have qualified. Previously, the department would judge report based on severity.

1 / 9
Marissa Kennedy died in February after months of abuse by her mother and stepfather, according to police.

In a Thursday morning presentation to the Government Oversight Committee, OPEGA Director Beth Ashcroft said her group has not yet determined whether or not the recommendations made would have saved Marissa and Kendall's lives. She said it's an answer OPEGA may never have.

"It's driving me crazy sitting here and knowing this [child abuse] is going on," Senator Bill Diamond said in a Thursday morning meeting between OPEGA and Maine's Government Oversight Committee. He asked how Maine can continue to follow decades-old statutes while child abuse rates are rising. "I don't want to wait another six months, another five months, another month before we step in and say 'We're going to stop this,'" Diamond added. "That's what's driving me crazy."

Christopher K. MacLean is the lawyer representing Sharon Carrilo, the mother accused of beating her daughter, Marissa Kennedy to death. MacLean reacted to the OPEGA report on Thursday, saying

"(The report) provides a view from the Ivory Tower and is completely disconnected from the practical reality of real life. DHHS does a great job receiving reports of suspected child abuse. They have a system in place to investigate each report. The practical problem is that each report of child abuse is given the same weight. A report from a pediatrician is investigated just like a report from a parent in a custody battle."

"Currently, each report is investigated as a separate case, sometimes by different caseworkers, and no one is looking at the big picture. Prioritizing cases where multiple separate reports have come in would allow existing resources to be used more effectively; if you are looking for a needle in a haystack, focus on the haystack where multiple people say the needle is. ..That would accomplish far more than the vague academic commentary in the OPEGA report and might just save the life of a child."

Rep. Anne-Marie Mastraccio, who is the House chair of of the Government Oversight Committee said she was frustrated that OPEGA did not provide details and insight about the specific cases of Marissa and Kendall in their report.

“...we can all agree we must do anything and everything we can to make sure this kind of tragedy never happens again. The report gives us a clearer picture of how and why the system failed Marissa Kennedy and Kendall Chick. The next step is a broader, more detailed investigation to give us the facts we need to act with a real sense of urgency to ensure Maine kids are protected.”

"At this time, our focus must be to ensure that the recent tragedies are never repeated, and that the two young girls who lost their lives receive the justice they deserve. I greatly appreciate OPEGA’s review of DHHS’s role within Maine’s child welfare system. We welcome and encourage external reviews of our processes and procedures, to ensure no stone is left unturned."

"Through our internal investigation, we have been able to identify areas in need of improvement, many of which are echoed in OPEGA’s preliminary report. We are working hard at implementing a number of reforms aimed at improving the current system. I look forward to working with OPEGA as they carry out their broader review. I am hopeful that more time and a more deliberative process will result in meaningful analysis and thoughtful recommendations."

"I am eager for the time when the criminal investigations have concluded and additional information will be available for the public. I agree with the advice of the Attorney General that nothing should jeopardize justice for these two victims. Once that has been achieved, I am confident that the Department’s internal review, combined with the findings of the reviews done by a number of different oversight entities, will provide substantive insight for reform and improvement. Evaluating the entire network of parties that make up our state’s child welfare system is critical to this process."