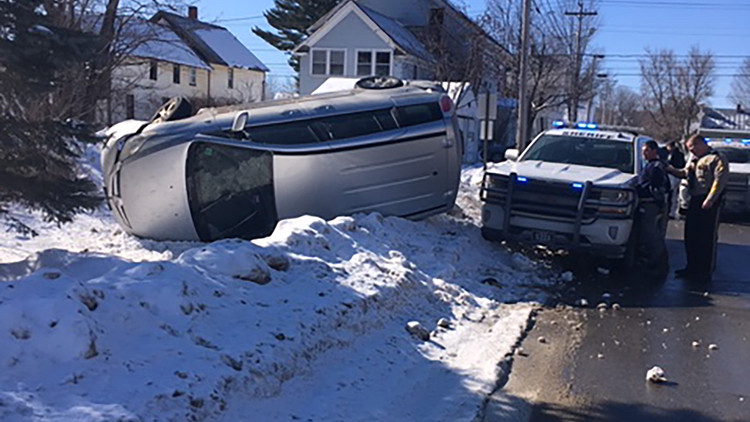 High-speed chase in Skowhegan ends in crash, then arrest

A high speed chase between a man and Skowhegan police ended after the suspects car went off the rode and flipped on its side.

Police say a chase between Skowhegan Cpl. Matthew Cunningham and suspect Derek J Nickerson ensued near Eaton Mountain and ended in a crash on Heselton Street in Skowhegan, according to the Somerset County Sheriff's Office.

An investigation revealed that Derek J Nickerson, age 34, of Houlton, Maine violated a protection from abuse order when he entered the home of his former spouse in Canaan, Maine.

Police said no one was home at the time, but a security camera that had been installed in the residence picked up Nickerson walking around inside. The security camera triggered an automated alert to Nickerson's former spouses cell phone. She immediately contacted the Somerset County Sheriff’s Office.

While Cpl. Cunningham was enroute to Canaan, he observed Nickerson heading west on Route 2 and initiated pursuit. A Maine State Police trooper also attempted to stop Nickerson. "Nickerson was operating his vehicle recklessly by driving at high speeds, often operating on the wrong side of the highway and failing to obey traffic control devices in his attempt to elude police and avoid capture," according to the Somerset County Sheriff's Department. officials said they forced Nickerson off the road on Heselton Street, ending the chase.

Nickerson was arrested on an outstanding warrant for violating a protection from abuse order and several other charges from today criminal conduct including Criminal Trespass (Class E), Eluding an Officer (Class C), Failure to Stop for an Officer (Class E), Speeding 30 plus (Class E) and Refusing to Submit to Arrest (Class D)..

Potential for other charges are possible after it's reviewed by the District Attorney's Office.

RELATED: Two people charged after drive by shooting in Waterville

RELATED: Branden Pitts is more than just a crossing guard for the Orono Middle and High Schools