Flanagan was leading Central Maine Power during the disastrous 1998 ice storm and later returned to lead the utility out of a series of missteps. 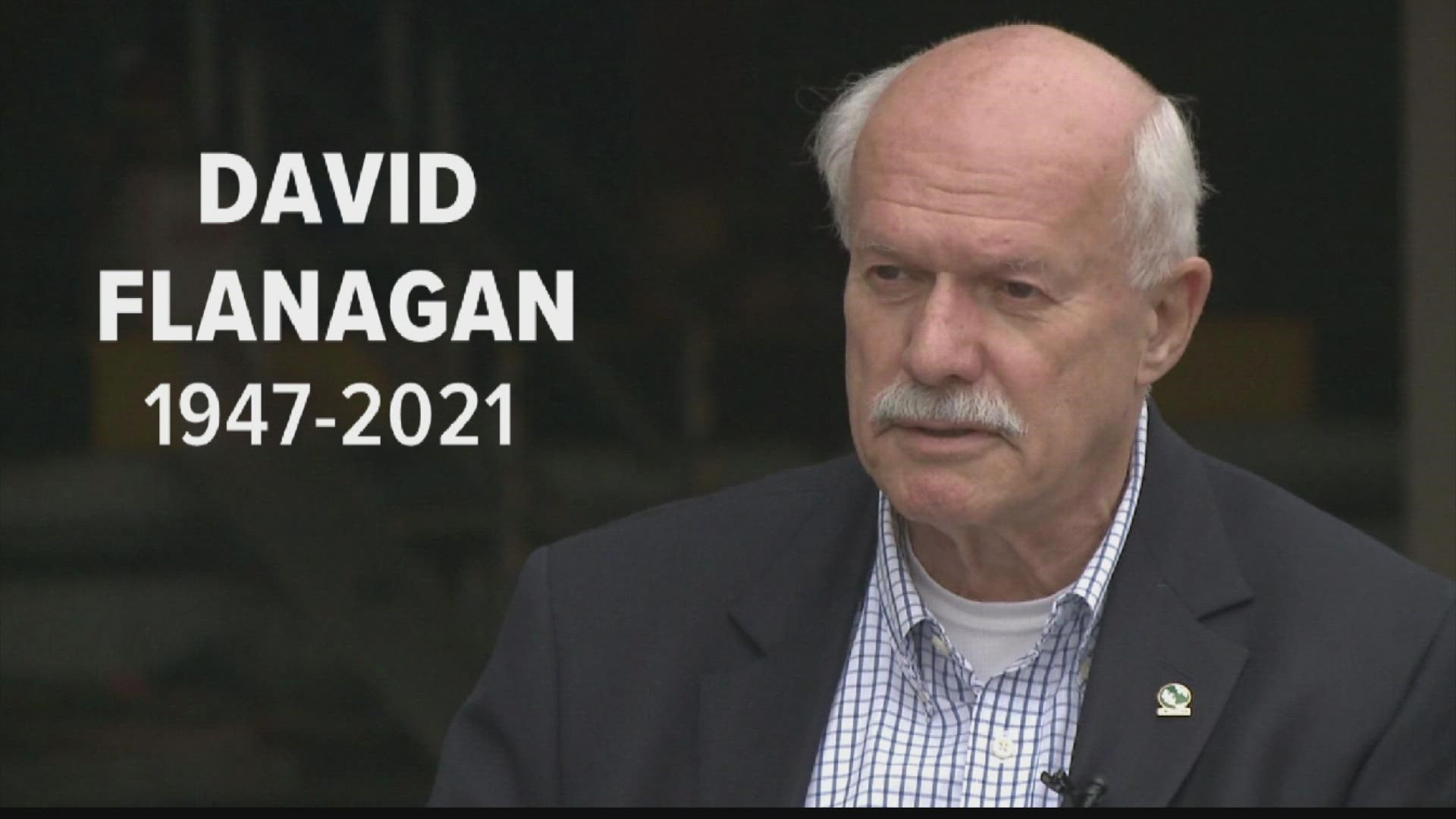 David Flanagan has died at age 74 after a varied career that included two stints at the helm of Maine's largest electricity provider.

“It is with heavy hearts we announce the passing of David T. Flanagan," his family said in a statement Thursday. "David loved the state of Maine and the indelible spirit of all Mainers, a characteristic he himself held so well to the end. Details of a memorial service in honor of David will be announced in the coming days.”

Flanagan was leading Central Maine Power during the disastrous 1998 ice storm and later returned to lead the utility out of a series of missteps.

Flanagan also ran for governor, served as president of the University of Southern Maine and earned a reputation as a turnaround specialist.

Flanagan said in August that he had been diagnosed with pancreatic cancer in fall of 2020 and had been receiving treatment at the Harold Alfond Center for Cancer Care in Augusta.

In August, he moved to an advisory role with the company and Joseph Purington was appointed president and CEO.

A number of Maine politicians, some of whom worked closely with Flanagan over the years, released statements in reaction to his death.

Gov. Janet Mills said she had a 50-year friendship with Flanagan.

“David Flanagan was a proven problem solver; an honest trouble shooter; a corporate and community activist; an investigator of ice storms and institutions of higher learning; an expert on the Washington County economy, cyber security clusters, public reserved lands, utility deregulation, spruce budworm epidemics, public housing, early childhood education and ships in bottles," Mills said. "In our fifty years of friendship, I always saw in him the same spirit of adventure, inquiry and honesty as when we first met. His loss is devastating to me and to the State of Maine. I offer my deepest condolences to his wife, Kaye, to his colleagues and to his community during this difficult time.”

Sen. Angus King, who was Maine's governor during the ice storm of 1998, said Flanagan was "tireless in working to help Maine people in need."

“David Flanagan was a friend, a leader, and a solid citizen of Maine – and, in the midst of a crisis, he was the partner you wanted by your side,” King said. “The Ice Storm of 1998 was one of the most serious challenges our state has ever faced – and during that perilous moment, David was tireless in working to help Maine people in need. We weren’t in touch on a daily basis; we were in touch on an hourly basis, keeping each other updated on the work underway and the problems that still needed attention. David’s contributions to this effort were so vital that I once interrupted a live television interview to answer his call, with no hesitation whatsoever."

“David’s resolve and strength under pressure were a testament to his fierce commitment and his wide range of skills honed by a career dedicated to public service," King continued. "He leaves behind a massive legacy, impacting every aspect of Maine from government to education to the state’s largest utility – and through his efforts, he made our state a demonstrably better place to live. Mary and I will miss him deeply, and we are holding his wife Kaye and all of his loved ones in our hearts.”

Sen. Susan Collins said she will "miss him enormously."

“David’s passing is a tremendous loss not only for his wife Kaye and their family members, but also for the State of Maine. His life was defined by countless contributions to his fellow Mainers and to our country in his many roles as chief counsel to a Maine Governor, CEO of Maine’s largest utility, counsel for a U.S. Senate committee investigation, and president of the University of Southern Maine," Collins said. "No matter the challenge, David would use his leadership talents to make a positive difference. David’s and his wife, Kaye’s, philanthropy also improved the lives of many Mainers and will be a part of his lasting legacy. David was a treasured friend, and I shall miss him enormously.”

Rep. Chellie Pingree said Flanagan's contributions to Maine "will not be forgotten."

“I’m saddened to hear David Flanagan lost his battle with cancer today. David’s leadership at CMP got Mainers through the 1998 ice storm and countless other outages," Pingree said. "His years of dedicated public service working with Maine governors and state legislators, passionate advocacy for education, and conservancy to protect public lands are a testament to his character and commitment to the people of Maine. David’s contributions to Maine and the business community will not be forgotten. My thoughts are with his family in their time grief.”