The Dallas DA has been ordered to appear in Kemp's court, located just a few floors below his offices, to convince the judge "why he should not be held in contempt."

The judge in the Amber Guyger trial is not happy.

One day after the historic trial ended, Judge Tammy Kemp filed an order demanding that John Creuzot, the elected Dallas County District Attorney, come to her courtroom on Halloween to tell her why he should not be held in contempt -- which theoretically could involve a trip to jail -- for giving a TV interview that she claims violates a gag order she put in place at the start of the trial.

When reached Friday, Creuzot said he had no comment.

The gag order, issued in January, says that "any attorney participating in ... the trial," including "any personnel of the district attorney's office," can't talk publicly about the case. However, statements regarding "the general nature of the proceedings," are OK, the order states.

In the local TV interview, Creuzot, who was a felony district court judge for 21 years before becoming a district attorney, defended his office's decision to pursue a murder charge instead of manslaughter.

The interview "was in direct violation of the court's order restricting publicity and did obstruct the administration of justice and impair the ability of the court to conduct its business with dignity and in an orderly and expeditious manner," the order states.

On the first day of the trial, testimony was delayed as the defense renewed their motion for a change of venue, saying Creuzot violated a gag order in the case.

“To be clear, on last night, the evening prior to the start of this trial, our elected DA did an interview about this trial?” said Kemp on Sept. 23, when the interview was brought to her attention.

The judge then talked with the 12 jurors and four alternate jurors individually, asking them if they had watched or heard about the interview.

Kemp denied the motion after each juror said they had no knowledge of it.

Creuzot has been ordered to appear in Kemp's court – located just a few floors below his offices at the Frank Crowley Courts Building – at 9 a.m. on Oct. 31. There, he will be required to convince the judge "why he should not be held in contempt."

Guyger was found guilty of murder on Tuesday and sentenced to 10 years in prison on Wednesday. 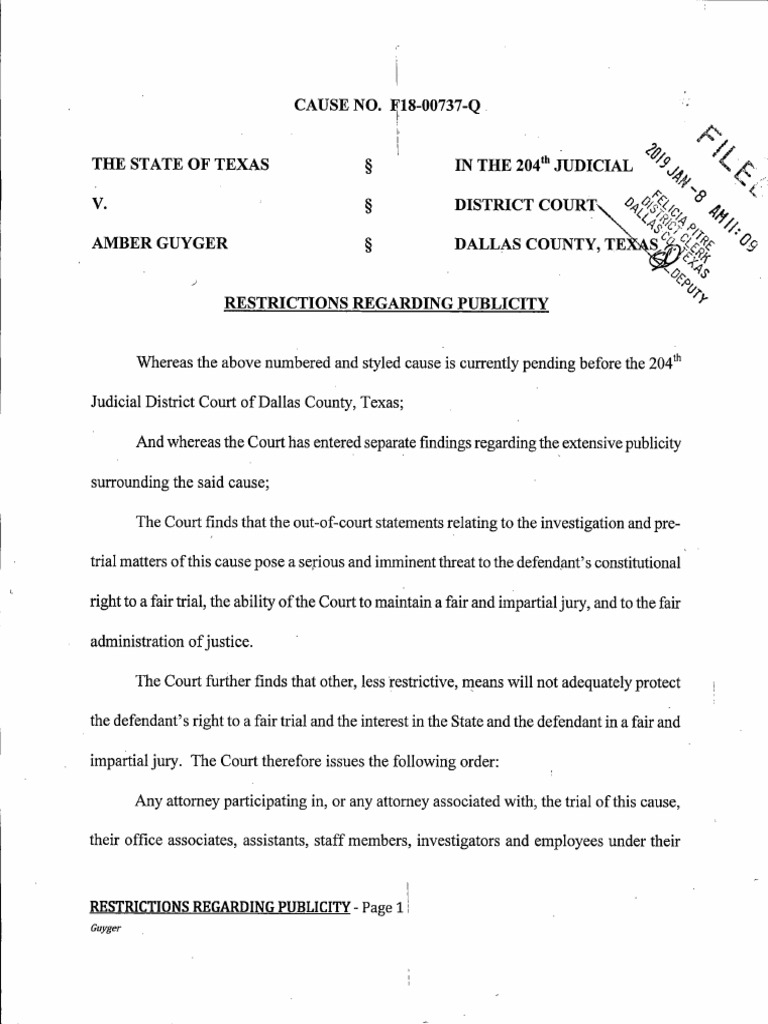 Restriction Regarding Publicity | Witness | Evidence
V. § DISTRICT COIJRT ~~`~~~,pF '*p~AMBER GUYGER § DALLAS COUNTY, TE G J A RESTRICTIONS REGARDING PUBLICITY Whereas the above numbered and styled cause is currently pending before the 204th And whereas the Court has entered separate findings regarding the extensive publicity The Court finds that the out-of-court statements relating to the investigation and pre- trial matters of this cause pose a serious and imminent threat to the defendant's constitutional right to a fair trial, the ability of the Court to maintain a fair and iinpartial jury, and to the fair administration of justice.

RELATED: Jurors in Amber Guyger trial describe how they made their decision

RELATED: Amber Guyger sentenced to 10 years for the murder of Botham Jean

Marpheen Chan plays a tune for the '207' audience