Cutest athlete on the field this Sunday comes from Maine 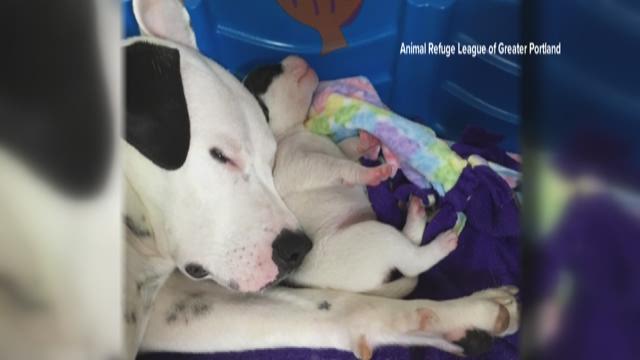 CAPE ELIZABETH (NEWS CENTER Maine) -- There's nothing like watching a player from your home state compete in one of the biggest games of the year.

We're not talking about the Super Bowl, but rather the Puppy Bowl. Airing on Animal Planet, the annual showcase of frolicking puppies is counter-programming to the aggression and competitiveness of the NFL. Viewers are reminded throughout the show to consider adopting a pet at their local animal shelter.

Juniper is poised to be a break-out star of Puppy Bowl XIV. She was born into a litter of ten puppies last July Fourth after her very pregnant mother was brought to the Animal Refuge League of Greater Portland.

Each summer, the Inn by the Sea in Cape Elizabeth hosts a dog from Animal Refuge League until it is adopted. Juniper's foster family said they knew right away she was destined for athletic greatness.

"She was the first one to walk, was very outgoing," said Elyana Smith. "She loved the beach and the woods and just going everywhere."

Juniper's sponsorship by the inn got her noticed by Animal Planet. Like a highly touted rookie, the network recruited her from the shelter for the big game.

Although the show was taped in October, the results are kept under wraps until it airs on Sunday at 3 p.m. Juniper has since turned seven-months-old and settled into life with her new forever family. The transition from her foster family was easy since they live right next door and visit often.

Both families and staff from the Animal Refuge League will get together for a Puppy Bowl watch party at the Little Tap House in Portland to cheer on Juniper as she and the rest of Team Ruffs take on Team Fluffs.