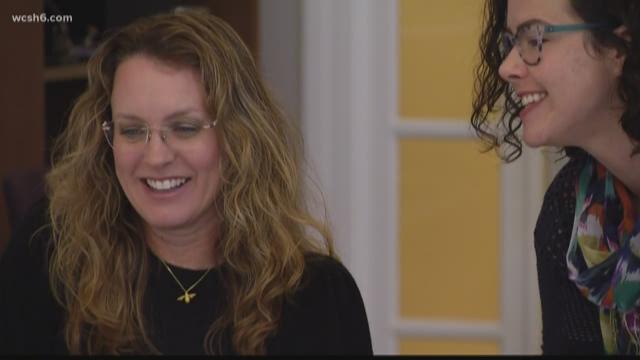 While more women speak out about sexual misconduct in the workplace, some are taking men out of the office equation entirely.

CoworkHERS, a female-only office space, has just opened in Portland, Maine. It's a place where professional women can rent desks and offices, and run businesses. It costs $100 a month.

The building in downtown Portland has private offices and meeting rooms, with one open-concept office area where multiple women have desks. There is a workout room, private space for lactation or relaxation, a kitchen with a fully-stocked wine fridge, and a room with a television and children's activities, should a working mother need to bring her kids to work for a few hours.

"It's a place where women can find what they need," said CoworkHERS founder Heather Ashby.

The idea came to her after she visited other co-working spaces in different cities. They were co-ed spaces, but she said the tended to be male-dominated.

"I felt they were very dude-heavy," she said. "I couldn't see myself as a middle-aged woman going there and fitting in."

So she decided to build a space that is female-focused. The theme of the office is "the hive," a play on the term "queen bee." The décor includes a honeycomb tile rug and bee-themed artwork. It is modern, clean and sleek. So far, there are 21 members. There is also event space, where a women's social club can hold networking and professional development activities.Ashby said she never imagined her business opening during a cultural moment like the #MeToo movement, where women are coming forward in droves to share personal stories of sexual harassment and assault, often in workplace settings. But as more high-profile men lose their jobs from sexual misconduct allegations, Ashby said her concept is gaining momentum.

"A lot of women have chosen to work at home because they don't feel comfortable at work," she said. "I have heard some horrible stories. Everyone has a story, I think."

While the space is female-focused, Ashby said she is not creating a "man-hating club." She said if a man truly wanted to be a part of their women's work area and social club, the group could consider it.