The city has hired a firm to conduct an internal investigation into a protest that was held in June of 2020 that ended in 23 arrests and damage to businesses. 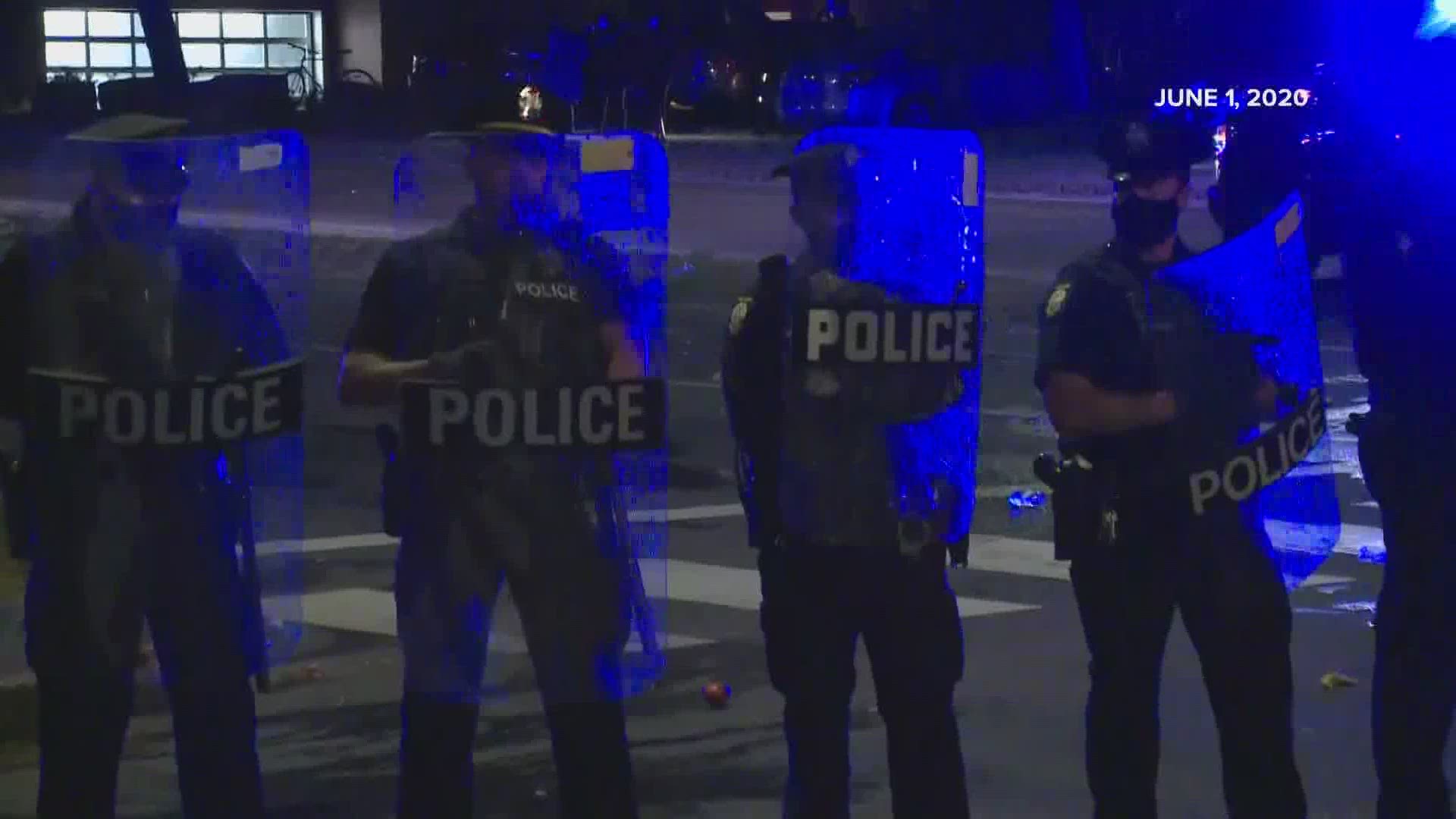 People may submit information in a variety of ways, including anonymously.

"The goal of the investigation is to ensure the integrity of the Department was maintained throughout its response to the protest," the City said in a release.

Frank Rudewicz of CLA is conducting the investigation.

"While the preference is to be able to communicate directly with those who have information, Mr. Rudewicz acknowledges that some may be reluctant to do so," the City explained. "In any event, identities will be kept confidential to the extent possible, depending on the information. The objective is to obtain all necessary information."

Anyone who believes that they may have relevant information that may be helpful to this inquiry is asked to contact Rudewicz:

The city of Portland has selected a firm to conduct an internal investigation into the Portland Police Department’s response to a protest held this past summer in the wake of George Floyd’s death that ended in 23 arrests and damage to businesses in downtown Portland.

The City says the goal of the investigation is to “ensure the integrity of the Department was maintained throughout its response to the protest.”

The firm, Clifton Larson Allen LLP (CLA), is expected to provide the city with its report in three months.

The protest in question started peacefully in downtown Portland on June 1, 2020, and became increasingly tense as night fell and police clashed with protesters in the streets.

The protest drew several hundred people to downtown Portland. It was just one week after 46-year-old George Floyd died in Minneapolis as a police officer knelt on his neck, despite his cries that he couldn't breathe.

Despite calls from organizers to peacefully disperse after a rally at Congress Square, a small group remained, and then headed to the Portland Police Department. Police said people “swarmed” police vehicles and protesters “threatened them with death.”

Portland Police Lt. Robert Martin said police had issued “orders to disperse” for more than an hour due to “riotous” conditions and then used pepper spray in pepper ball and aerosol canisters on protesters throwing objects at police.

“Several trash cans were set on fire in the Old Port and there were reports of burglaries and damage being done to buildings in the immediate vicinity,” police said in a release the following day.

This cop with a paintball gun was just told “if anyone throws anything shoot them” and jumped up on the wall over top of the crowd. @newscentermaine pic.twitter.com/dUId59bKOv

Police said because of the “increased violence and out of concern for the safety of civilians,” several orders to disperse and leave the area were issued before the first arrest was made just after 10:30 p.m. The majority of the group dispersed and order was restored just after 2 a.m., police said.

In all, 23 people were arrested, and businesses in Portland’s Old Port cleaned up the damage.

The Facebook group BLM Portland posted about Monday's protest the next morning:

"Last night PPD proved, as though there were ever any doubt, that police brutality and systemic violence are as deeply rooted here, as they are in any city across the country. While aggressing on protesters, shooting tear gas and rubber pellets, they made upwards of 20 arrests. BLM Portland organizers were on the ground and at the jail to ensure the safe release of those arrested. At 5:45 a[.m.], all protesters we released and their bail waived."

Portland Police Chief Frank Clark said in a statement that he and the department respect the right to peacefully protest and “are also disgusted by the recent tragedy.”

“Unfortunately a committed smaller segment of this group ended up making this event anything other than a peaceful and lawful protest,” Clark said. “They took the opportunity to commit acts of violence, damage public and private property and place my officers and the public at risk. We will not stand for such criminal behavior.”

Now, nearly eight months later, the city is turning to CLA to investigate the department’s response.

City of Portland spokeswoman Jessica Grondin told NEWS CENTER Maine that the city's Racial Equity Steering Committee, which was approved by city councilors on July 13, opted to undertake the investigation.

Portland Mayor Kate Synder said during the July meeting that the committee will help draft a vision on how best to handle systemic racism in the community. Of the $75,000 allocated by the city for this committee, $40,000 will be used for the investigation.

Grondin added that it's not that the city council doesn't believe either side, but it wants to be sure it has all the information.

"I think that you know that they continue to make progress [in] ensuring that Portland is committed to racial equity," she said, adding that councilors want "independent information that they could take forward with them as they make future decisions."

In a press release, the city said CLA’s forensic investigative practice is nationally recognized and has been engaged to provide independent reviews of numerous public agencies and personnel throughout the Northeast.

Frank E. Rudewicz of CLA said in a release that the company's "independent reviews have resulted in expert and independent fact findings to determine the appropriateness of practices taken by police agencies and personnel in light of the immediate circumstances at hand."

“Utilizing our diverse team of experts, we specialize in identifying and assessing all relevant information to provide an unbiased and independent review of incidents in question,” he continued. “It is imperative to assess not only the information presented at the time, but to seek out other relevant information that may not have come to light as yet. We look forward to providing the City and Portland community with the assessment and information necessary to move forward.”