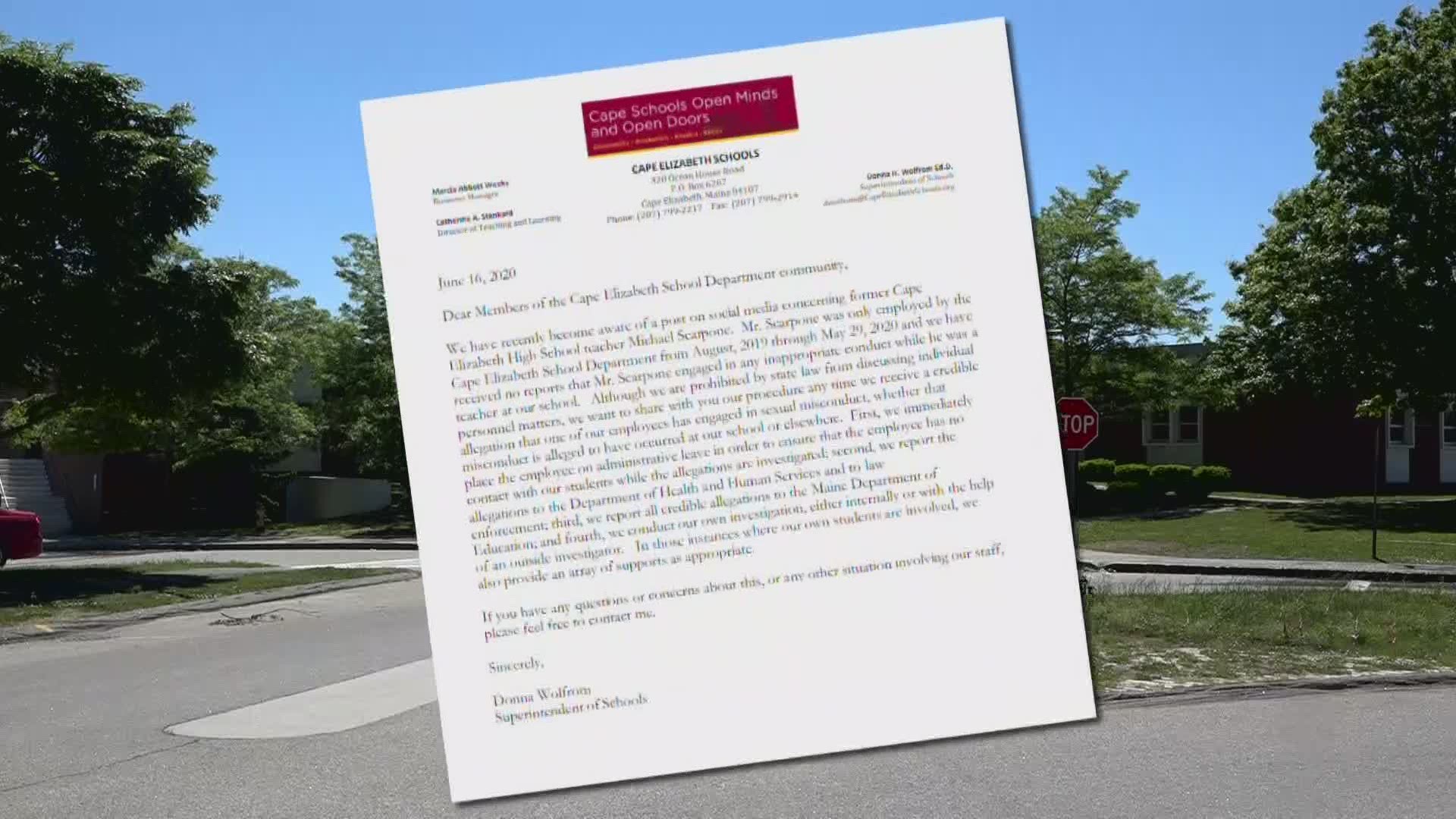 CAPE ELIZABETH, Maine — A music teacher at Cape Elizabeth High School has resigned amid allegations of sexual misconduct with a former student at another school, officials announced in a letter to parents Tuesday.

Michael Scarpone, who was only a teacher in Cape Elizabeth for nine months, resigned after school officials became aware of a 'credible allegation' made in a social media post, according to Superintendent Donna Wolfrom.

"We have received no reports that Mr. Scarpone engaged in any inappropriate conduct while he was a teacher at our school," Wolfrom wrote in the letter.

In the social media post obtained by NEWS CENTER Maine, the survivor, Rowan Horton, alleged Scarpone 'groomed' them from the age of 14 when they were a student at Brunswick High School where Scarpone previously taught.

"After years of processing what happened to me, I can finally say this publicly: Mike Scarpone is a sexual predator," Horton, who prefers 'they/them' pronouns wrote in the post.

The letter shared on social media was also sent to administrators at Cape Elizabeth High School.

Horton has since graduated and now lives out of state. They said that Scarpone eventually pursued a 'sexual, romantic relationship' when they were 17.

Horton told NEWS CENTER Maine they did not see a way out of the situation because Scarpone was someone they had come to know and trust. He was also well-liked among her peers.

"I felt like I would be sort of lost at sea without his support and guidance," they said.

"Mike was the source of most of my stability when I was a teenager," Horton wrote in their original post. "I was in a position where I didn't feel like I could say no to him...We had a year and a half long relationship in which I was constantly manipulated into engaging in sexual and emotional acts that I was never okay with."

Horton said they did not want to have sex with Scarpone, but feared what speaking out might mean for their future.

The Brunswick School Department also released a letter to parents Tuesday about the allegations applauding the 'bravery' of their former student.

"Our heart goes out to this young woman. As a society and as a community it’s important that the voices of survivors of sexual assault are heard. This type of alleged behavior by an adult authority figure, like a teacher, must be condemned and eradicated at all levels within the education system," Assistant Superintendent Shawn Lambert wrote.

Lambert said allegations were not reported when Scarpone was employed in Brunswick from 2010-2019.

At Cape Elizabeth, school administrators are looking to support students who were 'shocked' by the news.

"Many of our students who worked with this teacher are hurt and confused upon hearing of this," Wolfrom told NEWS CENTER Maine. "Safety is our highest priority for our students and we want them to feel safe in school."

Students and parents can call the high school office for support.

"All school districts must make it easier and safer for students to come forward with their concerns," Brunswick school officials said.

"The quickest way to make sure everyone stays safe from a predator is to make sure they all know who he is," they said.

Brunswick Police did not immediately return our request for comment. There is not currently an investigation by Cape Elizabeth Police, according to Chief Paul Fenton.

The Cumberland County District Attorney said he could not comment on the case.

A spokesperson with the Department of Education told NEWS CENTER Maine they are 'unable to discuss' any information citing confidentiality.

If you or someone you know needs support, call the Maine Sexual Assault Response Services of Southern Maine Hotline is 1-800-871-7741.