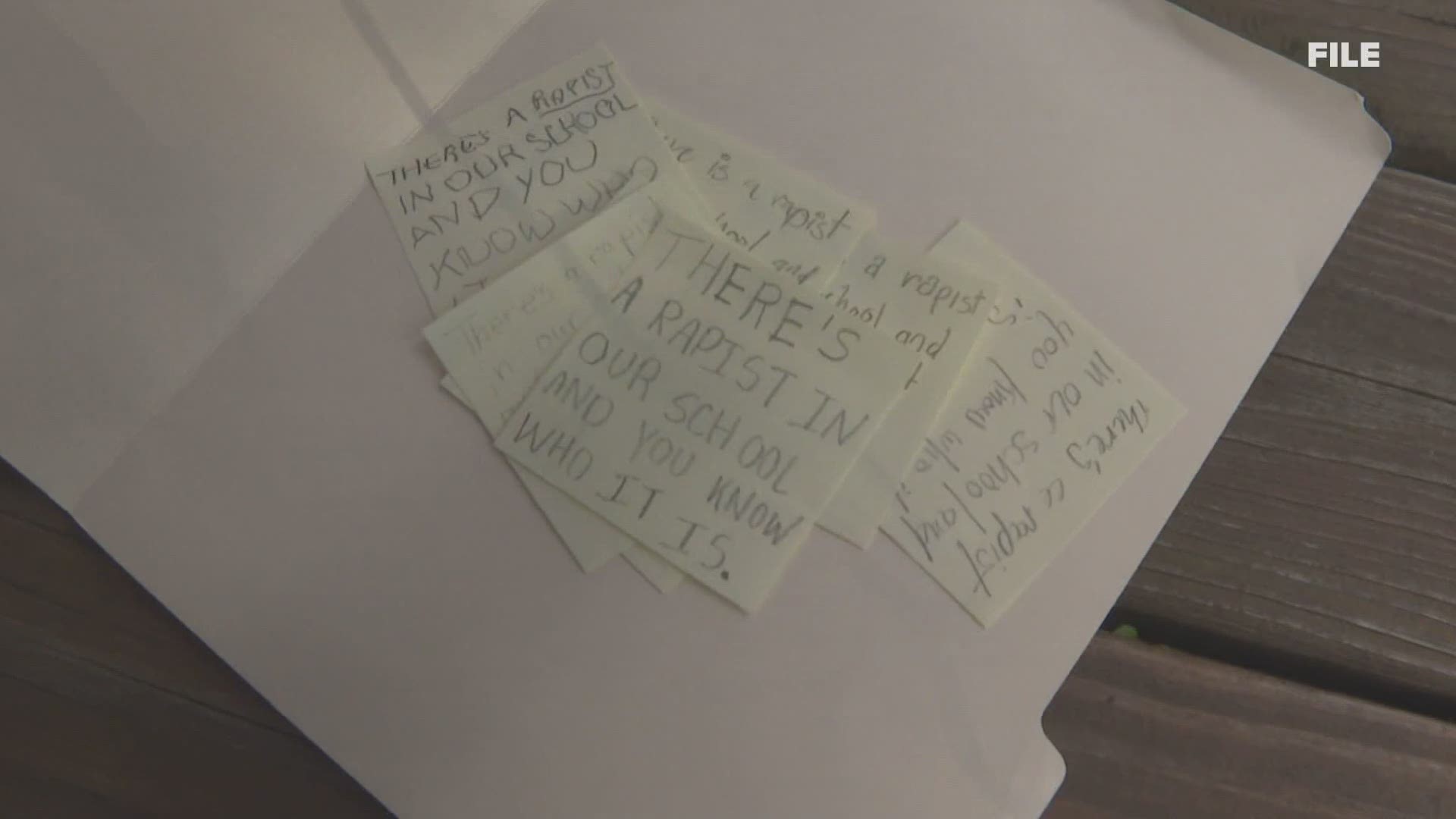 CAPE ELIZABETH, Maine — According to NEWS CENTER Maine's partners at the Portland Press Herald, the Cape Elizabeth School Department has agreed to remove any record of a suspension imposed on a student who posted a note in a girls’ bathroom saying there was a rapist in the high school.

That settlement will end a lawsuit that began nearly a year ago when the American Civil Liberties Union (ACLU) of Maine filed the free speech complaint on behalf of Aela Mansmann and her mother. The parties have asked the court to approve the agreement, a necessary step because the case involves a minor, the Press Herald reports.

Mansmann, who at the time was a sophomore, was suspended in October of 2019 for bullying after she left sticky notes in two girls bathrooms reading, "There’s a rapist in our school and you know who it is.” Cape Elizabeth agrees to clear record of student suspended for posting note about rape
The Cape Elizabeth School Department has agreed to remove any record of a suspension imposed on a student who posted a note in a girls' bathroom saying there was a rapist in the high school.

But school officials said they are required by law to investigate any time a student bullies another student, and said they are confident in their investigation of the incident.

School officials released a letter in October after investigating the allegations of rape in which they questioned at least 47 students.

Melissa Hewey, an attorney representing Cape Elizabeth Schools, said that an investigation found the rumors to be completely false.

"I still know who I'm helping and what my work is doing long term," Mansmann said. "I'm hopeful that in the future, survivors, advocates, and myself will reflect and say, 'That was a day that survivors' rights were defended'."

Judges have sided with Mansmann twice: once at the federal court in Portland and again at the appeals court in Boston. On both occasions, they ruled Mansmann was likely to succeed in her lawsuit and blocked the school department from enforcing her suspension. The case had returned to the lower court when the parties reached the settlement agreement.

According to the Press Herald, a spokesperson for the ACLU of Maine said the organization could not say more about the agreement than what was included in the motion. The attorney on the case also said it would not be possible to speak with the plaintiffs Thursday.

The appeals judges upheld District Judge Lance Walker’s ruling in August. In the decision, Circuit Judge Sandra Lynch wrote that bullying is a serious issue, but the school district failed to prove any causal link between Mansmann’s note and the bullying of a specific student. The judges agreed that the facts in the case supported Mansmann’s argument that her note was a general statement speaking out against her school’s handling of sexual assault allegations.

“Indeed, a school cannot suppress speech simply because it is unpopular with or critical of the school administrators,” Lynch wrote.

Once the court approves the settlement agreement, the motion says the school department will expunge the suspension from Mansmann’s record within 30 days. Then the case will be formally dismissed.