The Volunteers of America of Northern New England is celebrating 25 years of Camp POSTCARD (Police Officers Striving to Create and Reinforce Dreams) in 2018. 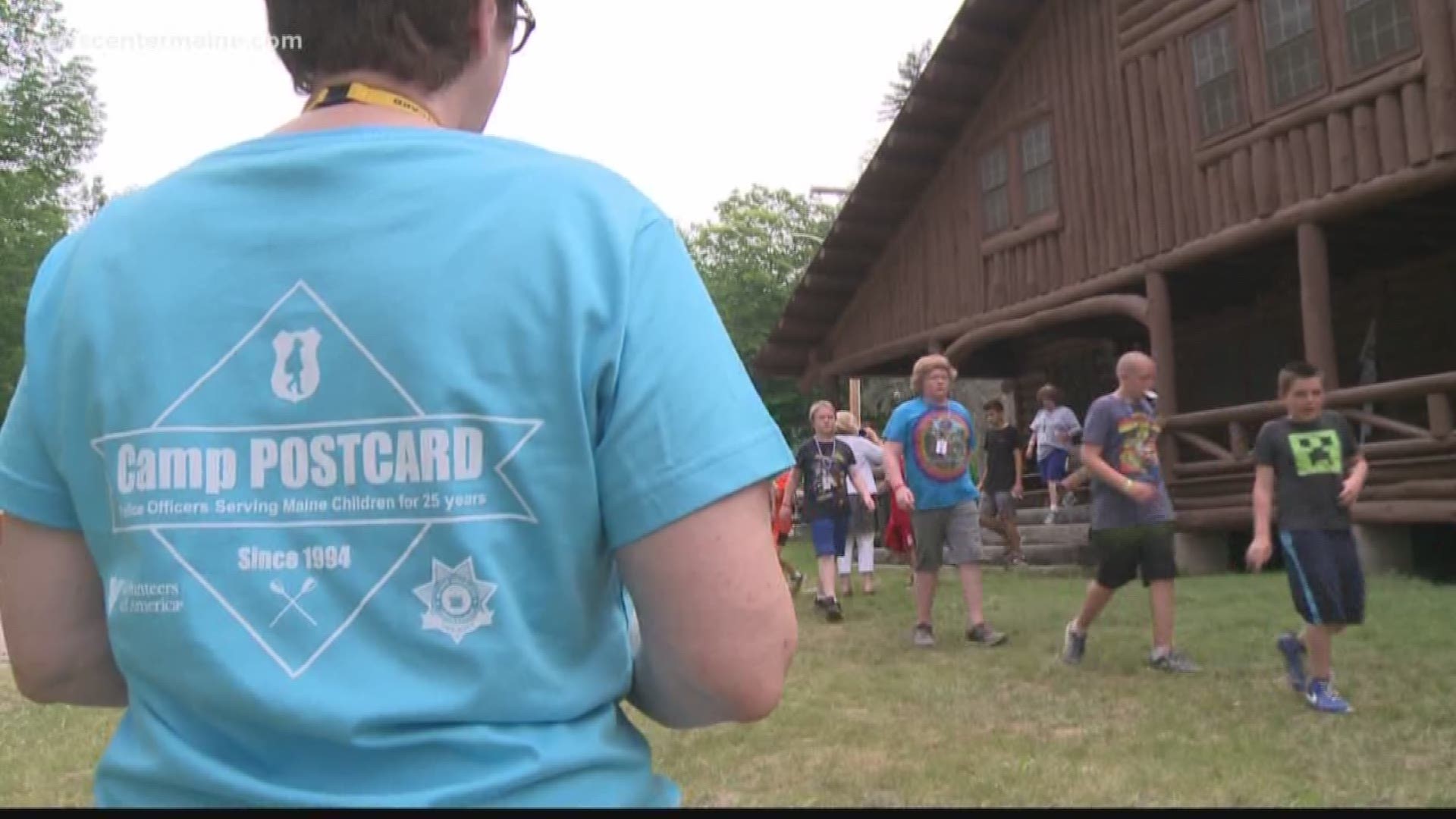 POLAND (NEWS CENTER Maine) — It’s tough to think of summer in Maine without envisioning swimming, canoeing, fishing, playing outside. But there are many children in this state who have never had the opportunity to do any of those, for a myriad of heart tugging reasons.

Down along Thompson Lake in the town of Poland, that paradigm is changing thanks to Volunteers of America of Northern New England and some dedicated members of Maine police, firefighting, game warden and paramedic teams.

It’s just before lunchtime and every camper and counselor at Camp POSTCARD (Police Officers Striving to Create and Reinforce Dreams) pours onto the lawn in front of the mess hall. They are all in orderly lines according to their bunkhouse.

One of the leaders steps onto the porch, followed by her campers. She breaks the silence with an interactive song, reminiscent of the military.

Hungry campers echo back the same chant before heading into the mess hall, a quintessentially Maine-meets-Adirondack A-frame, log hewn structure. It is owned by Agassiz Village in Poland.

It is not, however, a typical summer camp. Inside the mess hall, counselors serve up tacos to campers.

"In the three days, what’s the favorite thing that you’ve done?" Jeff Levesque asks campers. "Ga-ga ball. Hang out with you guys," they answer.

Levesque is not only a counselor this week. He’s a South Portland police detective and member of the state police swat team.

Behnke is also a counselor this year, as she has been for the past decade. In her real life, Behnke is a Youth Services officer with the Portland police department. Behnke, like Levesque, is donating this workweek to help run the camp.

"I have two kids in my cabin currently that their moms are incarcerated. And so for them, to see law enforcement in a personal way, you know I’m in tee shirt and shorts and I’m doing ga-ga ball with them, or we’re playing kick ball or whatever they’re doing, we’re doing in it with them so they can see we’re just regular people, just like them."

Behnke and Levesque are two of the 80 members of the police, firefighter, game warden and paramedic communities at Camp POSTCARD. Levesque has been volunteering the past eight years.

"If it wasn’t for the volunteers and the donations behind the program a lot of these kids might not otherwise get to experience a true Maine summer camp like this — a stay in weeklong summer camp and experience all the firsts they experience throughout the week."

"You learn new things that you haven’t really learned before like how to swim better, make new friends better and the people are really really nice."

Douglas is proof of those "first" experiences. He dunked his head underwater while swimming for the first time and is spending most of his days swimming in Thompson Lake.

Students come from all of Maine’s 16 counties, handpicked by teachers, guidance counselors and school resource officers.

"Some of the kids who come here have, um, tough lives. And it’s interesting to see through their perspective what they go through."

Michael Coon is vice president of external relations for Volunteers of America in Maine.

"I like to see the kids when they arrive and get off the bus and some of them are a little nervous and some of them don’t show up with anything. But by the end of the week, they’re trying new things, they’re smiling, lots of laughter and nobody wants to go home."

Which is entirely understandable.

The beautiful camp, along Thompson Lake in Poland, is free for fifth- and sixth-grade students.

Many arrive with only a bag of clothes, others with very worn shoes. And there are some who don’t have running water at home.

"They are thrilled to be here at camp so they can take showers," Coon said.

And still others who arrive very hungry. They are part of a growing, and distressing trend of food insecure children in Maine. Behnke says that is evident in the mess hall.

"We easily went through at least 100 tacos today at lunch. These kids who have been going without are taking advantage of all the food here."

Others are suffering in different ways.

"Some of them have trauma that they’ve experienced, whether it be an incarceration of a family member or a death in the family," Behnke said. "I took a kid yesterday in a canoe ride. It’s the first time he’s ever been in a canoe and he’s 12 years old."

"I was kind of scared of doing something different," said 11-year-old Ryllen.

This is her second summer at Camp POSTCARD and she’s slowly branching out in her interests. She is trying arts and crafts and even tested the water of boating.

"My cabin had a chance to go tubing on the boat out here and me and four of my other friends and my counselor went out on them. It was really fun."

The students — strangers at the beginning — are paired up as buddies. Linwood and Zakkary have discovered a shared fondness for fishing.

"I grew up in the city and I didn’t get to see any animals ever and it’s just kind of cool," Zakkary said. "I’ve gotten much much better at fishing these past three days. I’ve learned where to look for fish, what bait to use, for what type of fish."

Catching, then releasing fish builds confidence — and it’s evidently working for both Zakkary and Linwood.

The campers on Thursday will get to see their counselors all dressed up in their uniform — an impactful way of demonstrating that they can trust law and safety enforcement officers.

Everything about Camp POSTCARD supports the notion that all Maine kids deserve a time out in nature. It’s the Maine VOA’s largest event of the year, one Coon says is also his favorite: "I would do this all summer. This is just the best week of the year."

The Volunteers of America of Northern New England is celebrating a very important landmark: 25 years of Camp POSTCARD. This year, applications were submitted for more than 400 students to attend the camp, but only 161 children could be accepted.

Coon said there are so many Maine fifth- and sixth-graders who qualify, there could be a Camp POSTCARD all summer long, "and even then, we wouldn’t reach all of the children who could benefit the most."