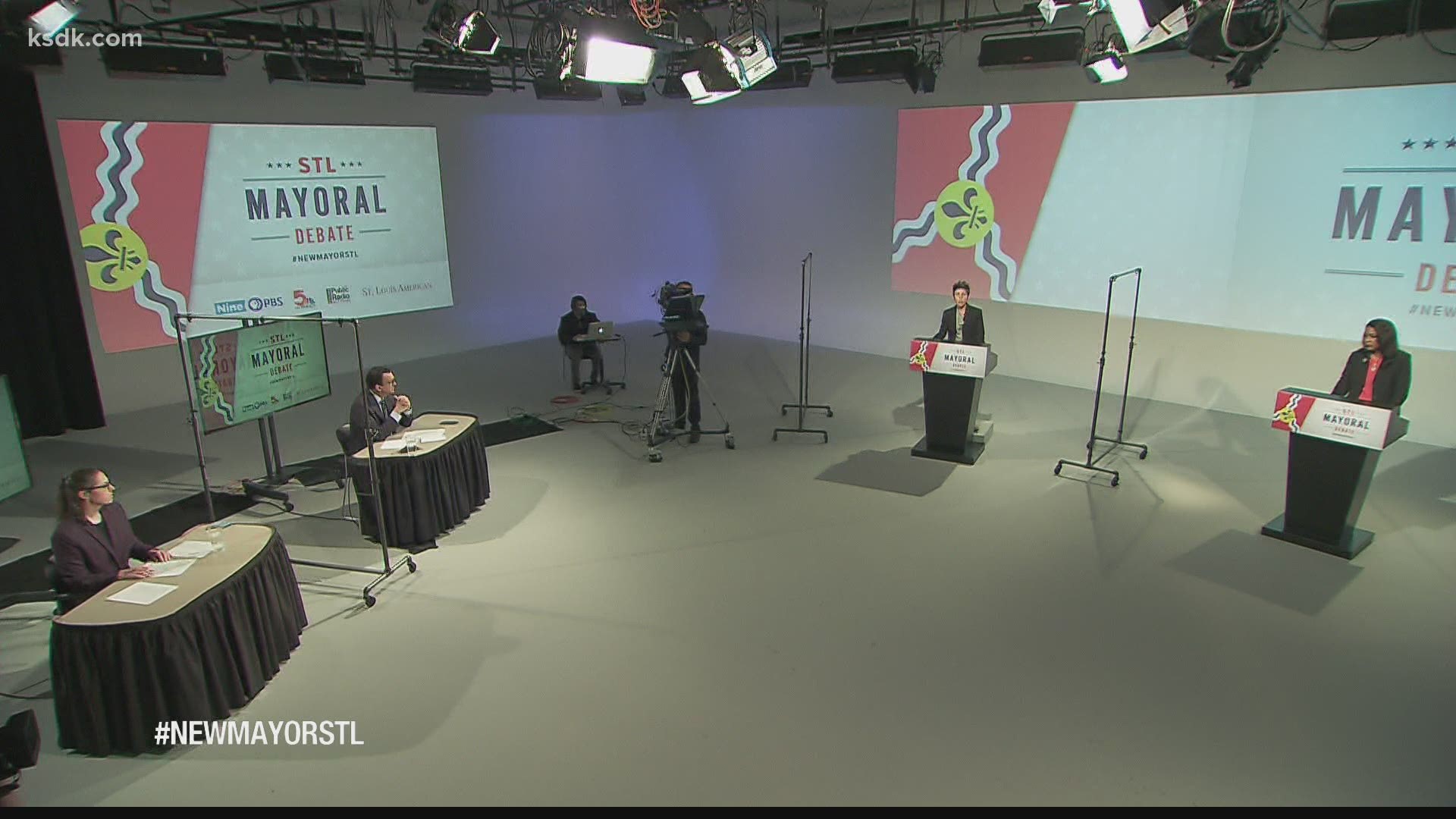 The two officials took different routes to the general election runoff. Treasurer Tishaura Jones, a former state representative who's been in her current office since 2013, lost one prior mayoral bid in 2017, but has maintained a high profile since then. Alderwoman Cara Spencer, first elected in 2015, had never before run citywide, and shocked many in the March primary by outperforming Aldermanic President Lewis Reed, who had been backed by big names in area business.

Want more political news delivered straight to your inbox? Sign up for our 5 On Your Side Politics newsletter.

The April 6 contest between the two women comes as the city — and entire region — face outsize challenges such as economic stagnation and crime.

But in a recent discussion with the Business Journal, Jones and Spencer offered specific ideas for how to reverse St. Louis' fortunes. Here's a look at where they stand on six different topics.

It wouldn't be the first time a mayor has expressed willingness to see changes to the tax. An adviser to former Mayor Francis Slay in 2011 predicted an election on the tax wouldn't need to be held again, a hint that it would be phased out. But a study funded by conservative philanthropist Rex Sinquefield concluded that separate tax hikes and fees needed to help offset the loss in earnings tax revenue largely weren't feasible.

The city's 1% earnings tax, on the ballot for renewal alongside the mayor's race, has been part of regional business calculations since the 1950s. It's likely to receive approval again, which would reauthorize it for another five years.

But Jones and Spencer expressed a willingness to explore changes in the policy, criticized by some as an impediment to economic growth in the city.

Jones said alternatives need to be examined because the tax totals a third of the city's general revenue. "That is just unsustainable," she said. "We need to see how we can diversify our sources of funds to make us not so dependent on the earnings tax should the voters ever decide that they don't want to pay it anymore."

Jones also pitched possible changes in how the tax is levied — including expanding it to St. Louis County. She said former Missouri Supreme Court Judge Mike Wolff told her that could be possible through a Board of Freeholders, which can alter government structures in the city and county.

Wolff, dean emeritus at Saint Louis University School of Law, said a Board of Freeholders would be empowered to institute an earnings tax in St. Louis County. But "the path to actually getting it approved is rather narrow," he said, citing the requirement that voters in the city and county OK any plan.

As for the idea itself, "it does make sense," Wolff said.

And Jones said a Board of Freeholders could also change who pays the tax based on income. She pitched a "progressive structure" in which someone making $25,000 to $30,000 annually would not be subject to the tax. "And the more you make, the more you pay," she said.

But Jones defended the tax's existence. "There is this fallacy that the earnings tax keeps us behind or that companies move out so they don't have to pay the earnings tax," she said. "St. Louis city's earnings tax or income tax is the lowest in the country. There are cities that are the same size or larger than us that pay much more."

Spencer said although businesses have told her the tax plays into decision-making on where to locate, "we still have the infrastructure of a city that was designed to serve 800,000 to 1 million people," necessitating its continuance. U.S. Census estimates for 2019 put the city's population at just over 300,000, down 6% since 2010.

Spencer said she'd look at making changes to the tax only if "our regional economy is growing gangbusters."

"And I think we really have the tools to do that, and we have the assets to do that," she said. "We can work together to get there."

Development in the city is poised to change in the next administration.

Spencer said she'd look to put more resources toward city planning, enabling the government to pitch developers on why projects can work in more distressed areas, something she called a "proactive approach."

And Spencer wants to fund the city's development agency, St. Louis Development Corp., through general revenue instead of its current structure, in which it gets fees from incentive deals.

When we have that agency "that is supposed to be vetting proposals getting their funding from those projects, it really sets an inverse incentive for pushing those through," Spencer said.

The SLDC's longtime leader, Otis Williams, is retiring at the end of Krewson's term. Spencer said his replacement should be someone who has worked in a city that's growing "and understands how to position St. Louis for growth."