Roy played hockey for North Yarmouth Academy and later for Boston University. He died on October 29, 2020. 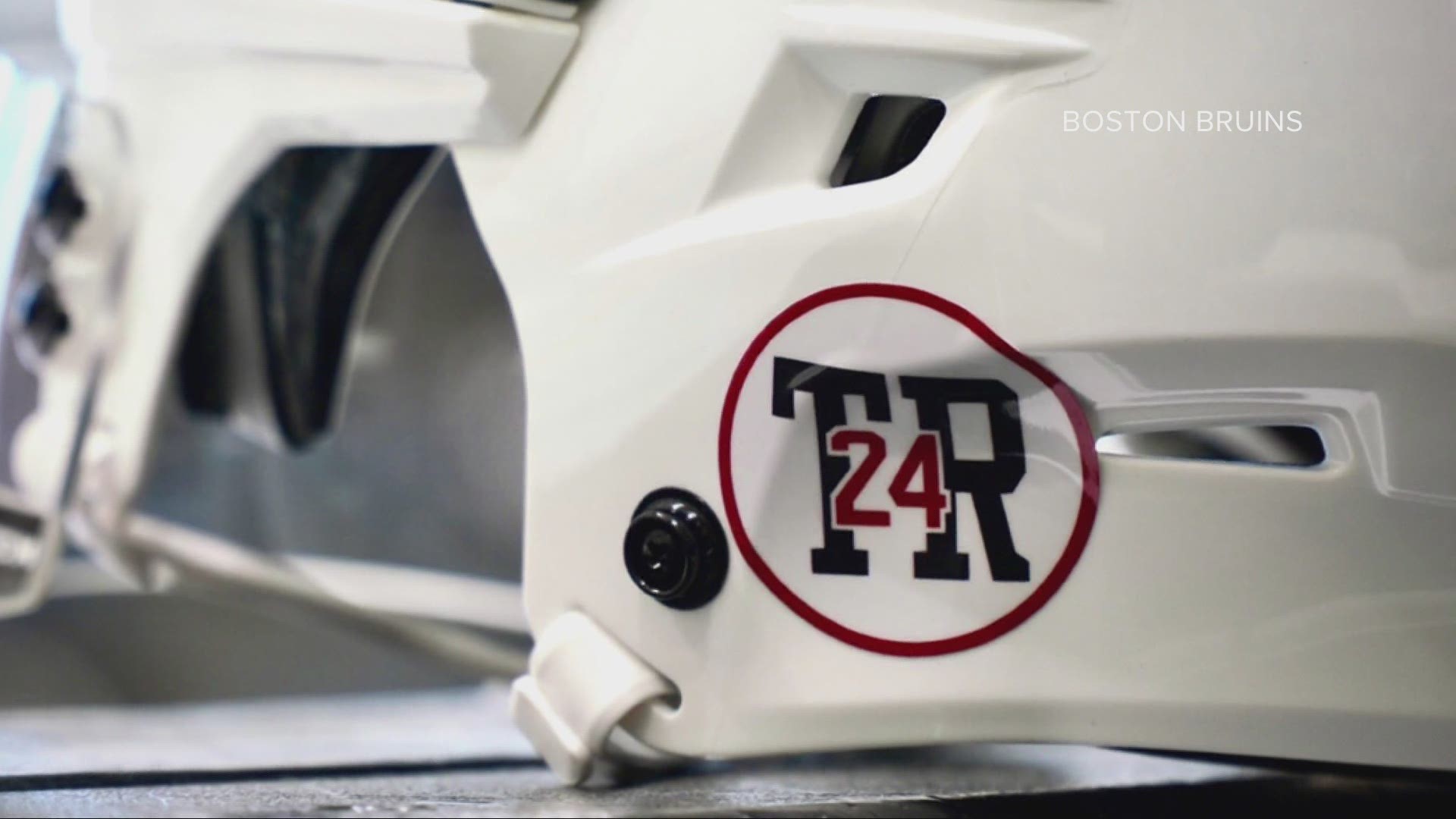 Roy, who played hockey for North Yarmouth Academy and later for Boston University, died on October 29, 2020 in Burlington, Vermont. The BU men's and women's ice hockey teams will also wear the emblem: a sticker that reads "TR24," the number he wore with the Terriers.

"The Boston Bruins are proud to join Boston University this upcoming season in honoring the courageous and inspirational life of Travis Roy," said Bruins CEO Charlie Jacobs in a news release. "I am forever grateful for having had the opportunity to call Travis a friend and will never forget the lessons his life's journey taught us all. Travis's profound legacy will always be remembered within the Bruins locker room and in hockey rinks across the world."

The school also has renamed the Maine Prep Cup, a tournament featuring the boys and girls hockey teams from NYA, Kents Hill, and Hebron Academy, as well as the Bridgton Academy boys and Berwick Academy girls teams, to the "Travis Roy Prep Cup."

NYA and Tabor Academy, where Travis graduated from, have also agreed to play an annual charity game, with the money going to the Travis Roy Foundation.

With COVID-19, these games have been difficult to schedule.

@NYABoysHockey & @NYAGirlsHockey will be doing the same with "TR #00" helmet emblems. Other honors are in the works.

RELATED: Remembering Travis Roy: A legacy created from tragedy but built on inspiration

During his first shift in his first collegiate hockey game at Boston University in 1995, Roy took the ice with the Terriers leading North Dakota 1-0. 11 seconds later, Roy's life changed.

After finishing a routine check, he fell into the boards, breaking his fourth vertebrae leaving him paralyzed. For 25 years, Roy used that tragedy as motivation and inspiration for others.

"When Travis felt the tap on his shoulder from Coach Parker signaling his turn to take the ice for BU, it was the best moment of his life," said Roy's parents, Brenda and Lee, as part of the news release. "Years of hard work and dedication were about to pay off - his lifelong dream was coming true. Twenty years later, the Bruins offered Travis a one-day contract and asked him to drop the ceremonial pregame puck. He was honored and humbled to do so. Fans from around New England were present on both occasions cheering him on. It was their love and support that gave Travis the courage and motivation to move forward under the most difficult of circumstances. Travis never wanted to let these fans down, and, with their support, he lived a life of purpose and impact even he never dreamed possible. We thank BU, the Bruins and sports' fans throughout New England for loving and supporting our son and the Travis Roy Foundation."

Apparel featuring the TR24 logo is available for purchase through Boston University, with all proceeds benefitting the Travis Roy Foundation. Go to GoTerriers.com/TR24 to visit the online store, which includes t-shirts and hooded sweatshirts in both adult and youth sizes.