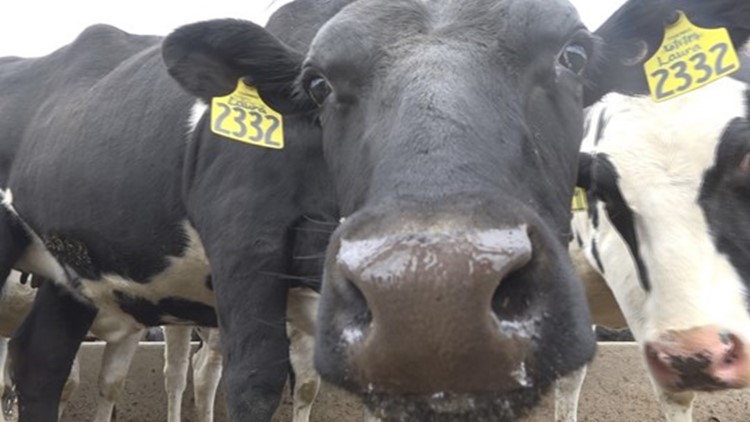 Photo by: NCM
In an effort to keep the Maine farm brand an honest one, Governor Mills signed LD 351, an act that requires Maine-trademarked meat and poultry to be born and raised in the state.

AUGUSTA, Maine — Picture this -- you're shopping for dinner at your favorite grocery store. You walk down the chilly meat aisle for a local steak, and you're faced with a decision to choose between one of two beef options: one is $10, the other is $20, and they're both labeled with a "Maine-raised" sticker. Which one are you buying?

It's no secret that most of us would choose the cheaper steak -- however, what we're often left in the dark about is where it really came from.

Governor Mills recently signed LD 351, "An Act to Ensure Accuracy in the Labeling of Maine Meat and Poultry", into law.

The law requires all poultry and meat products labeled with a certified "Maine" trademark to be born and raised in the state. The only exception within the act is for poultry, which may be labeled as "Maine-raised", as long as it's raised in the state no more than a week after hatching.

Rep. William Pluecker, who's a farmer himself at Hatchet Cove Farm, presented the bill back in January. He said prior to LD 351 mislabeled meat and poultry was harmful to consumers and undermined honest neighborhood farmers.

While "small farmers were birthing, raising and processing their animals in Maine," Pluecker said bigger businesses were able to turn a profit by claiming the Maine brand on outsourced animals after completing just the processing step. This often meant importing livestock from out of state and briefly holding them before slaughtering in Maine (leading to the hypothetical grocery shopping scenario earlier).

"We found that a lot of people were losing marketplace shares, so we got together and organized." Pluecker said.

"An Act to Ensure Accuracy in the Labeling of Maine Meat and Poultry," requires Amanda Beal, the Commissioner of Agriculture, Conservation, and Forestry, to enforce prohibition of Maine-trademarked meat and poultry unless born and raised in the state.
Maine Legislature

The Maine Senate passed the act on June 12, and Mills signed it into law on June 21.

"We saw a clear need for clarity in labeling, and now we have that clarity," Pluecker said.

But labels and birth locations aren't the only factors that make it hard for seasonal meat farmers to make a living.

Restaurants and retailers also contribute to the "ongoing issue," said Ben Hartwell, owner of Sebago Lake Ranch in Gorham, ME.

Hartwell said some retailers are "more concerned with selling a perception" of locally sourced meat -- a misconception that many restaurants tend to advertise on menus without hard facts.

Hartwell's All-Natural farm only sells grass-fed beef and has a zero tolerance policy when it comes to growth hormones and feed antibiotics.

"It's a lot of work to produce animals and do a good job at it. Then you have these big distributors coming in, and it makes it hard for someone like me to even compete. People who follow the rules are losing money," Hartwell said.

Although LD 351 helps "crack down on retailers making untrue claims," Hartwell thinks the next step is consumer education and incorporating grass-fed regulations on all Maine farms.

The Maine Farm Bureau released a statement on LD 351 today:

“We are pleased that Governor Mills signed this important legislation into law and are excited for the new opportunities this change will bring for small beef producers in our state. We see this as an important step towards protecting the “Maine” brand, which is synonymous with high-quality.”

With 389 Maine farms that reported having chickens and over a thousand more that had beef cattle in 2017 according to USDA, this law will certainly affect Maine agriculture far and wide.

"It's simply a competition between people who say they're doing what they're doing, and those who actually are," Hartwell said.