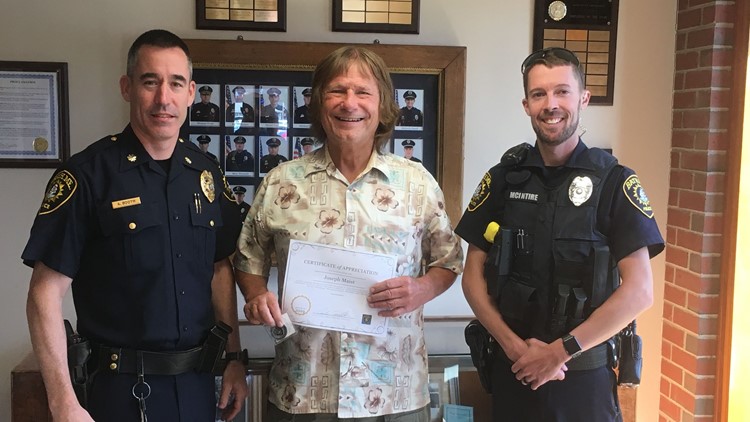 BATH, Maine — A good Samaritan in Bath is being credited by police with helping catch a pair of theft suspects, one of which reportedly assaulted an officer.

Bath police said Joseph Maist "selflessly came to the aid" last Friday of Officer Brett McIntire, who was struggling to detain two teenage shoplifting suspects at a local convenience store, the name of which was not released.

While attempting to detain the 17- and 15-year-old suspects, a boy and girl from Brunswick, police said the boy assaulted Officer McIntire, injuring him.

Maist, 71, saw the commotion and rushed over to aid McIntire, police said, helping him get control of the 17-year-old boy until additional officers arrived.

For his actions, Deputy Chief Andrew Booth and McIntire on Monday presented Maist with a department coin and a certificate of appreciation.

"The Bath Police Department has a great relationship with our community and its citizens," Booth said in a statement. "Maist represents the best of these citizens, coming to the aid of his local police at risk to his personal safety."

The teens were collectively charged with theft, assault on an officer, obstructing government administration and possession of alcohol by a minor.