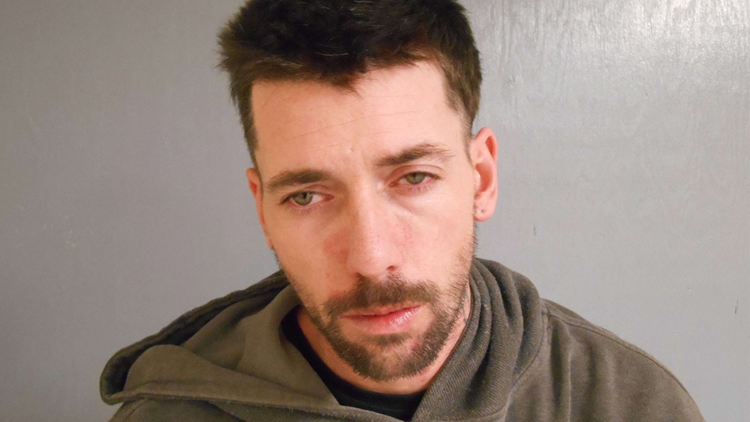 WATERVILLE, Maine — Ask anyone about their luck trying to walk across an icy patch, and chances are, you'll hear a story about slipping and falling. One man has his own unlucky story now -- and he's in custody at the Waterville Police Department.

After leaving with an undisclosed amount, police say 37-year-old Jason Mackenrodt ran across four lanes of traffic and into the parking lot of a restaurant when his plans took a spill for the worst.

Mackenrodt slipped on ice, fell, and landed on the pavement. The stolen cash and gun came out of his jacket pocket and scattered across the lot.

This all happened in front of an unsuspecting Maine State Police special agent.

Lt. Glen Lang of the Computer Crimes Task Force was in a cruiser nearby when he witnessed the commotion. Quickly realizing what he had just seen, Lang ran up to Mackenrodt and detained him until the Waterville Police Department arrived.

Shortly after Mackendrodt fell, wind began to scatter the money around the parking lot. Bonney says several members of the public ran to pick up the cash and give it to the officer. Bonney believes they've recovered most of the stolen money as a result.

As for Mackenrodt, who suffered a bruised knee in the fall -- he's being held in lieu of a $25,000 cash bail.  He has been charged with robbery and terrorizing and is also being held on a probation violation.

Bonney says he's never seen anything like it in his life.

"It's such a good feeling when you catch a robbery suspect.  It's even better when Mother Nature lends a hand."

The Waterville Police Department release a statement on Facebook Tuesday afternoon, thanking Lang and the community members for their help catching the Mackenrodt.