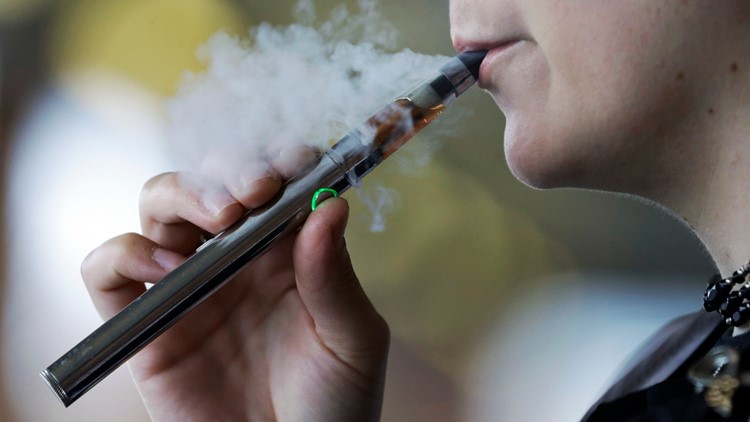 Photo by: AP
FILE - In this Oct. 4, 2019, file photo, a woman using an electronic cigarette exhales in Mayfield Heights, Ohio. With one in four teenagers now using e-cigarettes, underage vaping is universally condemned, and the federal government considers it an epidemic. But some other researchers believe recent trends continue to show vaping’s promise as a tool to steer millions of adult smokers away from cigarettes, the nation’s leading cause of death. (AP Photo/Tony Dejak, File)

Most of us know the advertisements by heart -- frightening anecdotes about what could happen to your body and your health as a result of prolonged cigarette use. For some people, these warnings have worked, encouraging them to break the habit and nix the nicotine. But a new player has been in the mix for a while now -- and some doctors are worried it may be just as harmful as traditional smoking in the long run.

In the same way that cigarettes were once made glamorous in popular culture, vaping has been deemed 'cool' by a big part of the population -- in particular, by the young people. The tool was once presented as a means to wean people off of cigarette smoking -- and a misleading reputation and enticing flavors lead to a large part of the younger generation taking part in vaping.

New studies released this week, however, indicate that the use of e-cigarettes could have serious health consequences in current users years from now -- which is bad news for teenagers who have made vaping a habit.

A study that looked at a database of more than 705,000 adults, published by the American Journal of Preventive Medicine, found that in people who had never smoked regular cigarettes, e-cigarette use was associated with 75 percent higher odds of developing COPD (or chronic obstructive pulmonary disease).

RELATED: The minimum age to purchase tobacco and vape products is going up. Will it keep kids from using them?

Maine is not excluded from this escalating health issue. A study citing CDC data determines Maine has had the seventh highest rate increase of vaping in the country within the past two years. In the U.S. as a whole, there has been about an eight percent increase.

A lot of health officials are particularly concerned about research that shows just how involved the younger generation has become with using e-cigarettes. In Maine, data from a 2019 Maine Integrated Youth Health Survey shows 45 percent of high school and 16 percent of middle school students have tried e-cigarettes.

These numbers saw drastic increases from data recorded in 2015 and 2017.

Awareness that most e-cigarette products contain nicotine has gone up in the past two years from 25 to 56 percent -- but 23 percent of youth respondents in 2019 still thought e-cigarettes contain only flavoring.

Dr. Ganesha Santhyadka, a pulmonologist at St. Joseph Hospital in Bangor, says his primary concern about vaping is the high usage among the younger generation. He thinks the issue could develop into a national public health crisis, especially years from now when the effects of long-term vaping are more clear.

“The sad part of the whole situation is more youngsters getting into it – and we haven’t even seen the full problem," Dr. Santhyadka said. "You know, 10 years down the line or 20 years down the line, you don’t know how many cases we’ll be dealing with.”

If you are a parent and are worried that your child may be vaping, there are steps you can take to keep him or her safe.