Maureen Davis and Patsy Miller got permission to put a community refrigerator next to the town's chamber of commerce via a 4 to 1 Skowhegan board of selectmen vote. 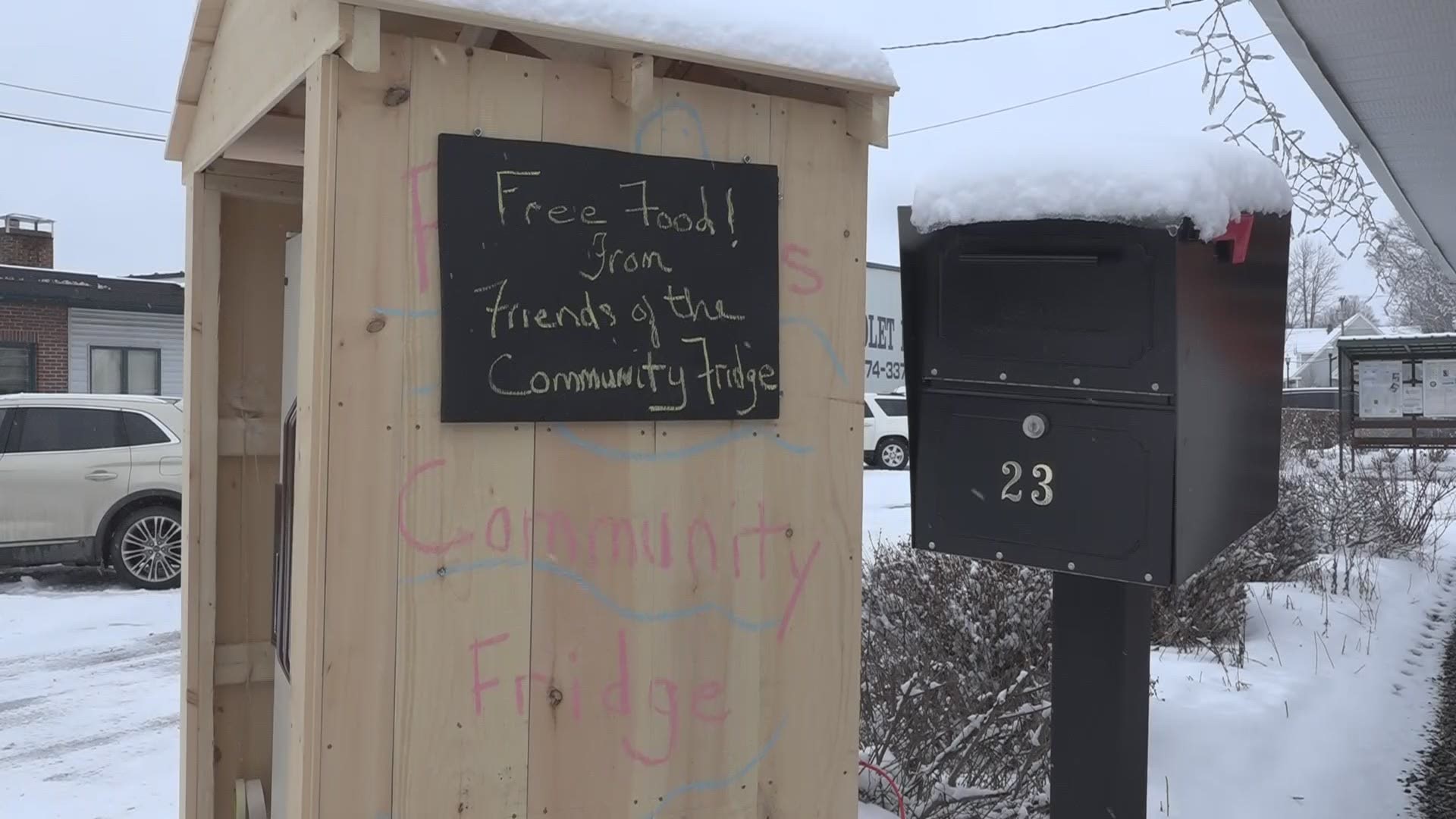 SKOWHEGAN, Maine — If you're driving through downtown Skowhegan, you may notice an unusual sight. On the side of Commercial Street, a refrigerator stands outside next to the town's chamber of commerce building, rather than in a kitchen. The out-of-place appliance is serving a special purpose, though.

Maureen Davis of Skowhegan says weeks ago, she was listening to an NPR podcast about community refrigerator efforts in New York City. She says she had an extra refrigerator in her basement, so she called her friend Patsy Miller to brainstorm implementing the initiative in their town.

"My initial reaction was, 'Oh my word, can we really do this?'" Miller expressed.

As it turns out, they could. The community refrigerator has been up since Saturday, surrounded by a shed-like structure Miller's husband and his friends built with lumber donated by Hammond Lumber Company. The refrigerator is left unlocked 24 hours a day, seven days a week for people to drop off or pick up food anonymously.

If you’re driving through downtown Skowhegan, you may notice this refrigerator on the side of Commercial Street. I’ll tell you about a creative initiative by two women to help their neighbors on @newscentermaine at 5:30 and 6:30 a.m. #wakeMEup pic.twitter.com/zvjPd2QTPt

These women say even within the first week, they've already seen participation. Businesses and community members have been donating everything from frozen foods to home-cooked meals to dry pantry items in the "blessing box" next to the community refrigerator.

"Today, we opened up the refrigerator and someone had donated chicken in the freezer," Davis said excitedly. "There's cheese; there's vegetables. People are putting in what they have."

"It is so wonderful to see the excitement," Miller added. "We didn't expect it, so it's a little overwhelming."

RELATED: 'It is ok to ask for help.' More people experience food insecurity for the first time

The project didn't come without hurdles, though. Jason Gayne is the president and CEO of the Skowhegan Chamber of Commerce. When Davis and Miller approached him, he was happy to host the community refrigerator at the chamber -- but he also knew it would have to go through the town's board of selectmen, since the town owns the land around the building. In mid-January, the proposal passed with a four to one vote, with an agreement that come early February, it will be revisited to make sure everything is running smoothly and there is no damage, stealing, or vandalism etc.

Gayne says he is glad the proposal passed because he's already seen action happening around the community refrigerator, noting hunger is a real problem in the greater Skowhegan area.

"People are donating," Gayne expressed. "People are taking from the food box (the blessing box), as well as the refrigerator -- so we know that the need is here."

Davis says a lot of people are finding themselves in need during this pandemic, who may never have thought they would be in that position. It's one reason selectwoman Betty Austin voted in favor of the proposal, as a way for people to get help discreetly.

"I like the idea that people can go there, and nobody knows -- so they don’t have to feel uncomfortable or embarrassed," Austin said.

It's an important mission in a time when experts like Dawn DiFiore, the community resources manager at Good Shepherd Food Bank (GSFB), says Mainers are hurting more than ever.

"I think that food and hunger has been really affected by the pandemic," DiFiore said. She says GSFB saw a lot more first-timers in 2020, with about 31.2 million pounds of food donated to the agency. That's compared to only 10 million meals in 2010 and 27.2 million meals the last fiscal year. Difiore says even still, GFBS estimates they're 40 million meals short.

It's a reminder that community outreach always helps, even if you don't know where to start.

"I think most people want to help other people," Davis said. "Sometimes, it's just hard to know how."

"It’s something that we could do that fills our hearts and helps our community," Miller add with a smile.

Anyone is welcome to donate or take food from the community refrigerator. There are wipes and hand sanitizer inside the shed to help keep people healthy during the pandemic. Those with questions about the refrigerator can email friendsoffridge@gmail.com.