A York resident who wanted to honor his father, a Maine State Trooper killed in the line of duty, put up the flag. But some people in town consider it to be racist. 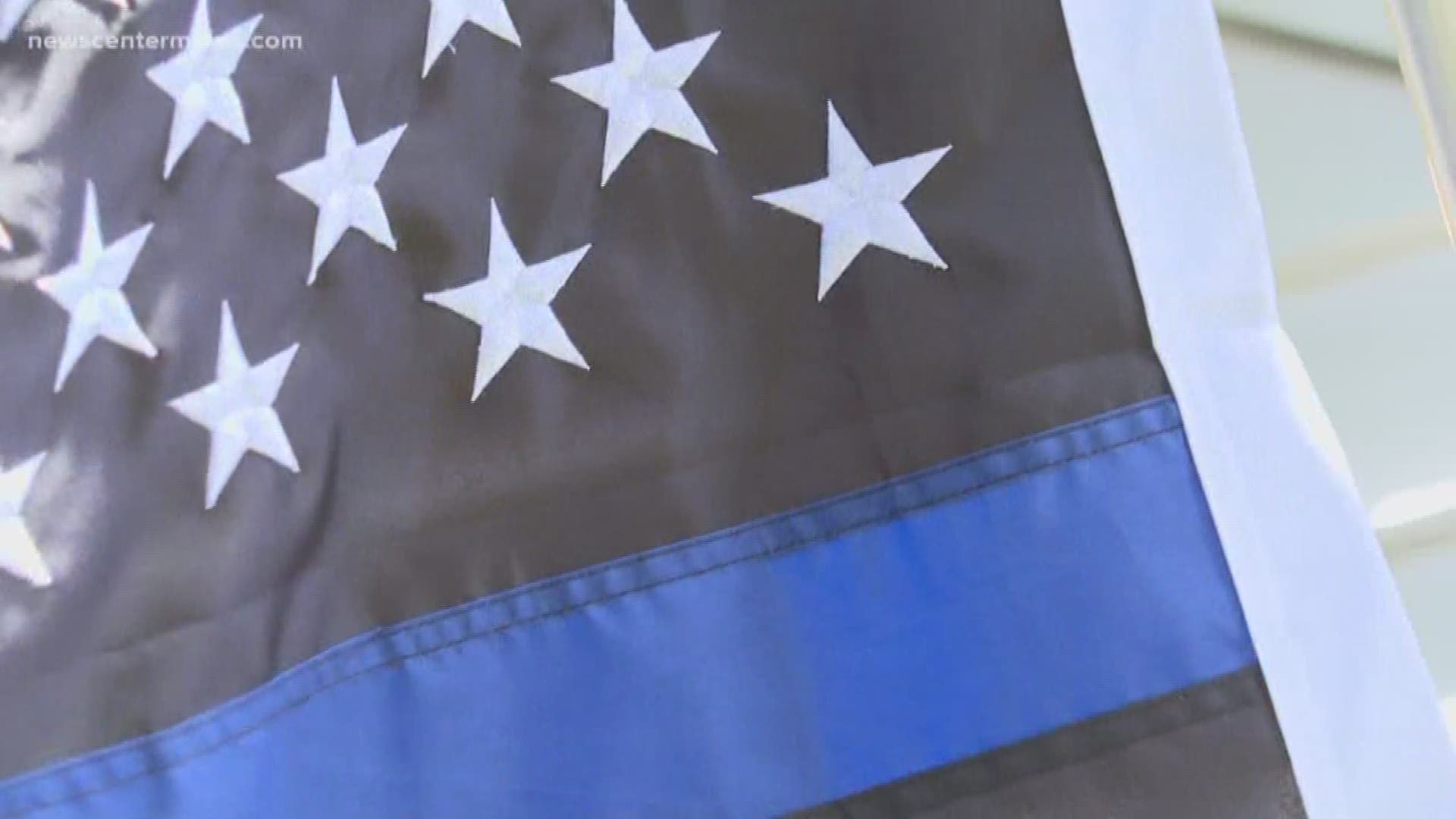 YORK, Maine — The town of York is embroiled in controversy over a flag.

The "Thin Blue Line" American Flag, which is meant to honor law enforcement officers and their families, was put up by residents Steph and Charlie Black as a way to pay tribute to Charlie's father, who was shot and killed in the line of duty decades ago.

But there are some people in the town who believe the flag is racist.

For law enforcement officers, the flag is a symbol of solidarity. The blue line represents police officers standing together between chaos and order. The black lines are a constant reminder of fallen officers.

This week, though, the flag is at the center of a growing controversy

Steph's father was a Maine State Trooper. So was Charlie's father.

But 55 years ago on July 9, 1964, Trooper Black was shot and killed while responding to a bank robbery in South Berwick. Charlie was born three weeks later, joining his two older brothers.

"That was a really tough time for my family," Charlie Black said. "The family changes forever."

When Charlie and Steph noticed an empty flag bracket on a utility pole in front of their house, they thought they would temporarily put up their flag to commemorate the difficult anniversary.

"It not only represents our family's loss, but it represents all officers lost," Charlie added.

But that's not what the flag means to everyone.

"A resident came in and said there's a problem. This is a flag that represents segregation and discrimination," York Town Manager Steve Burns said.

Burns said he also received a call from a local advocacy group that wanted to meet with him after hearing similar concerns.

He also learned that a letter to the editor, talking about the inappropriateness of the flag, would be in the town paper.

Burns called Charlie's mom, Mary Black Andrews -- a former town selectman and the 2018 York Citizen of the year -- to give her a heads-up about the controversy.

"This is just ripping a wound in her heart. It was pure instant emotion for her and her whole family," Burns said.

Mary Black Andrews told Burns she would tell her son to take down the flag.

"This is not a racist white supremacist symbol, and I'm angry it's portrayed that way," Charlie Black said.

Burns says the issue "is some people see that flag is discriminatory or racist, and the concern is how do you honor a fallen officer and his memory and how do you not put out that type of message?"

In 2017 during the violent protests in Charlottesville, Va., a "Thin Blue Line" American Flag was carried by a white supremacists.

Members of the York Diversity Forum say they never asked for the flag to be taken down, and they empathize with the Black family. They also, however, want people to know that symbols like this flag mean different things to different people.

"They bring different feelings and different reactions, and that's a flag that does both these things," board member Christine Hartwell said.

"The flag has been used by people who are racist," said Chair Susan Kepner. "What we're about is bringing things forward that are of concern and trying to educate people in a forum, where you can hear both sides and create understanding by understanding both sides."

Jack Johnson, who has lived in York for 35 years, says the entire situation is disappointing and upsetting.

"If there is anything today in this world you don't agree with, what's the first thing you say? You're racist."

"Don't our feelings matter, as to why we put it up?" Steph Black said.

Steph and Charlie Black say they will continue to fly their "Thin Blue Line" American Flag with pride for all police officers and their families.

"This is what we do, and we're not going to let it be taken away from us."