'The Two Cent' pub at 82 Clinton Avenue in Winslow is expected to open by Friday, July 24. 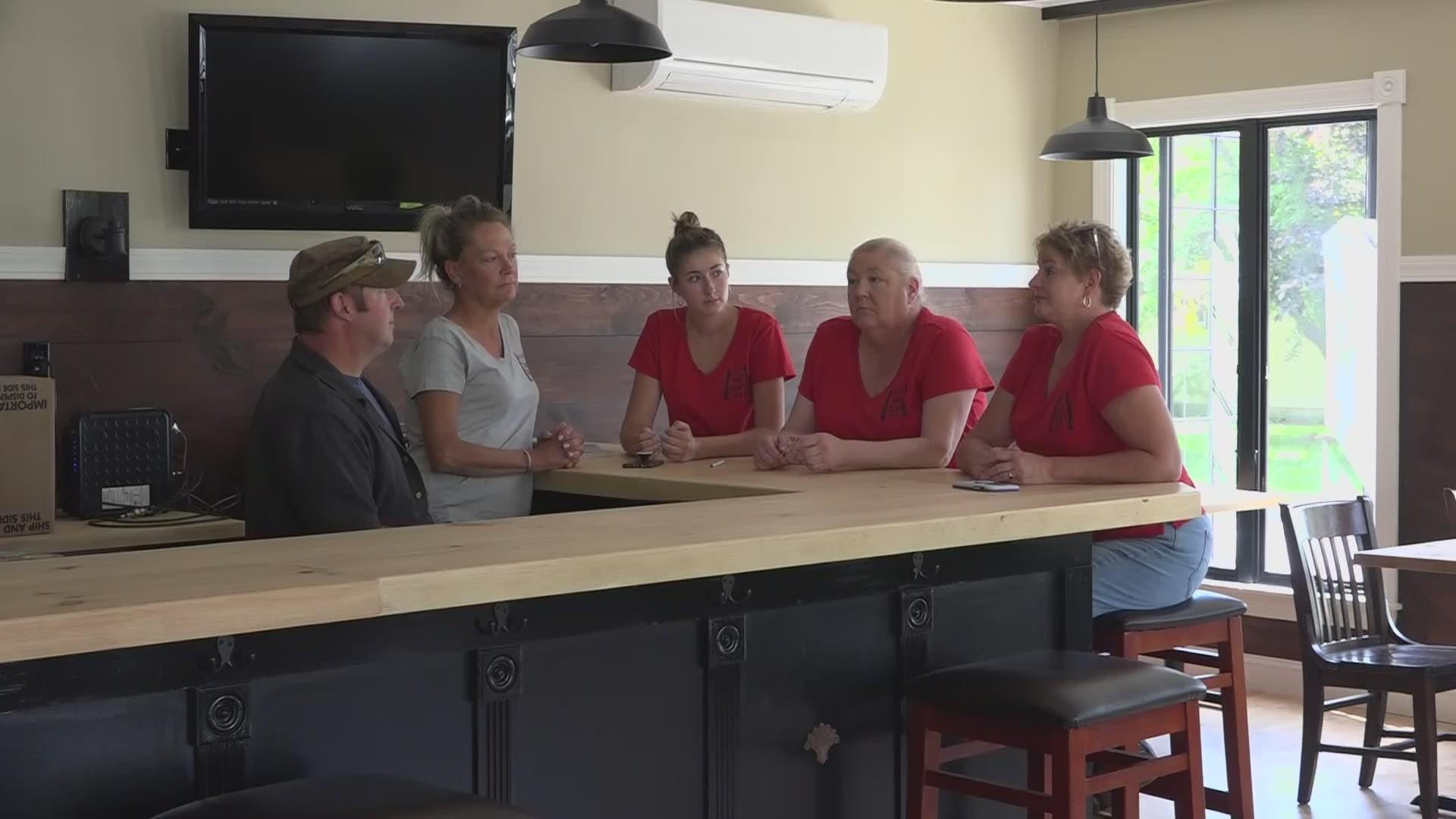 WINSLOW, Maine — It’s late Thursday morning, and the town of Winslow is relatively quiet, an occasional car or two weaving along the windy farm roads. It’s a stark difference compared to the lively atmosphere inside the building at 82 Clinton Avenue – a new pub, expected to open by next weekend.

Stacy Barnes, Shawn Joler, Patty Boutin, and Lisa Quimby are busy sweeping the floor, wiping off the bar and kitchen counter-tops, and opening the pub’s windows to let in cooler summer air. They are the four staff members at ‘The Two Cent’ and have known each other for 18 years. When the coronavirus pandemic first took hold in Maine, the business they worked at had to shut its doors after just a month of trying takeout service. As a result, they all lost their jobs – and Barnes decided it was time to take her future into her own hands.

A group of four people who lost their jobs at the start of the #coronavirus pandemic are taking the future into their own hands and opening a new pub in Winslow, hopefully by next weekend. Learn more about ‘The Two Cent’ story on @newscentermaine at 5 and 6 a.m. #wakeMEup pic.twitter.com/GIsig5B68w

“We have this whole new neighborhood of people who are excited for us to open up,” Barnes, the official proprietor and owner of The Two Cent told NEWS CENTER Maine. She says that within their first week of creating an official Facebook page, they received more than 1,000 likes – and that number keeps going up.

Joler, a chef for the pub, says he’s noticed a similar trend.

“The foot traffic specifically is very heavy in the area, Joler expressed. “On a daily basis, people are peeking their heads in the window and asking when we’re open.”

Barnes says after she lost her job, a friend reached out to her, asking if she wanted to take over the running of his business. She took the opportunity, leasing the property, incorporating the actual business itself, and dealing with licensing. Now, they are on track to open Friday, July 24 and will serve pizza, other pub foods, and have a full bar.

“I think (people) just want a place to gather and to feel like they’re human again and not isolated from everyone,” Barnes guessed about potential customers. She told NEWS CENTER Maine that they will be following COVID-19 state guidelines, per the Maine CDC – asking customers and employees who can to wear masks or face-shields and socially-distancing tables.

Joler says they will be keeping the menu relatively simple to start – but when asked whether he’s nervous about taking on such a big project during an economically-challenging time, he said he is not.

“To be perfectly honest, I’m not worried,” Joler told NEWS CENTER Maine bluntly. “We all work very hard. We will do well.”

“We’ve worked side by side for so long that it’s like family,” Barnes emphasized. “We’re looking forward to bringing more people from this area into our family.”

To learn more about The Two Cent, visit their Facebook page.

RELATED: VERIFY: Requirement to wear a face mask does not violate constitutional rights