Sebago Lake provides water to 1 in 6 Mainers, as well as more than 20 breweries in Greater Portland that use its water to make beer. Those breweries are giving back. 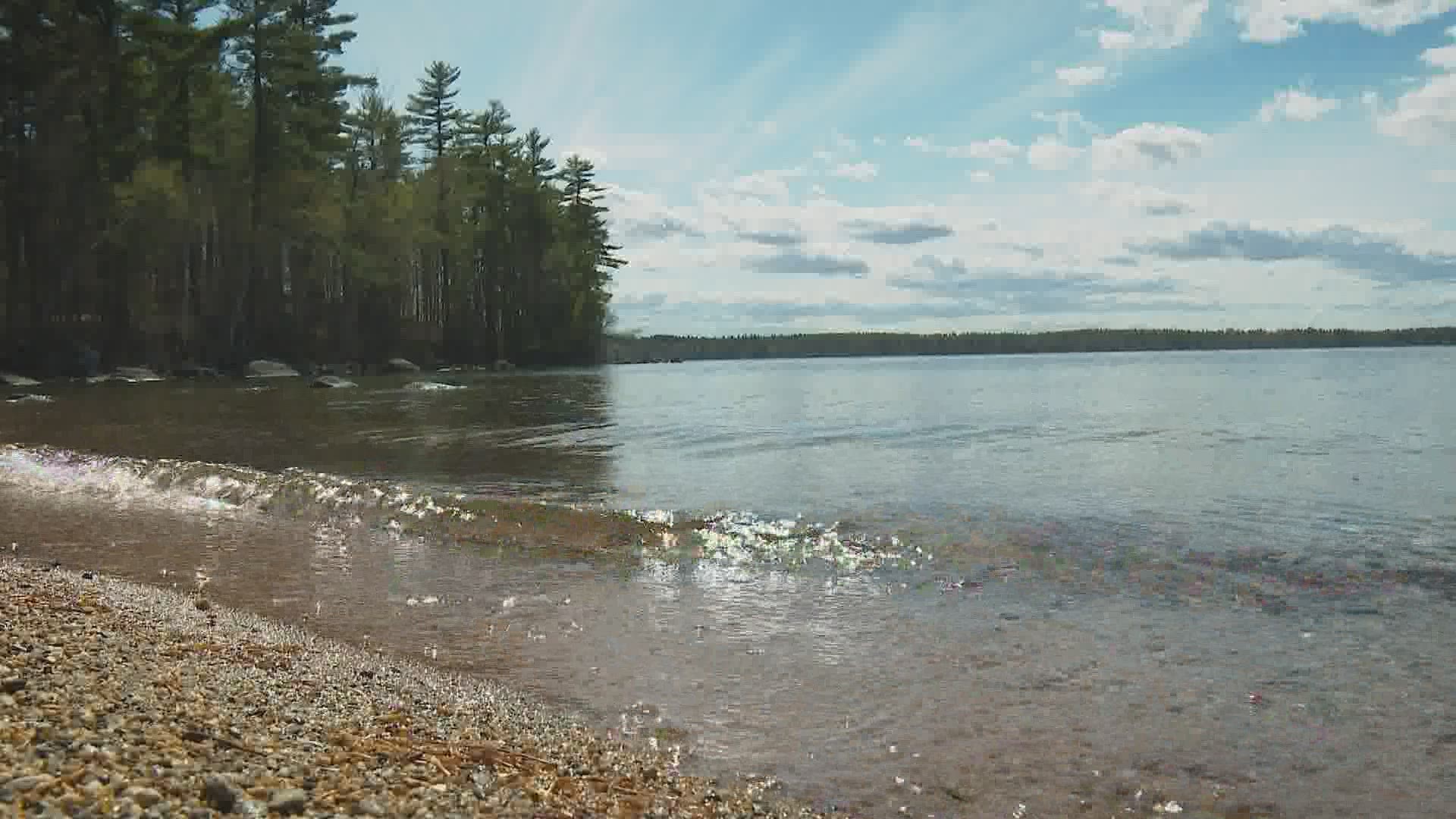 SEBAGO, Maine — Along with miles of rivers and countless streams, Maine is home to thousands of crystal-clear lakes. One of those, Sebago Lake, provides drinking water for about one in six people in the state.

Nearly 215,000 Mainers drink some of the cleanest water in the country.

Of 13,000 lakes and rivers in the United States used for drinking water, only 50 lakes are so clean that water does not require filtering before it’s disinfected, according to Paul Hunt, environmental manager for the Portland Water District.

Sebago is one of them.

"Sebago Lake is so clean that we can completely skip that step," Hunt said. "Our raw water has the qualities of finished water from other treatment plants."

That filtration can cost millions of dollars, so not needing it means Mainers' water bills are cheaper, and so is the beer.

Beer is 90 to 95 percent water. Dozens of breweries in Greater Portland use the water to brew their craft beer.

"It's almost something that if you're not careful, you can take for granted because the water is so consistent and so great each time," said Jason Perkins, brewmaster of Allagash Brewing Co. in Portland.

The water is so clean, that it allows breweries to be more creative.

"It's almost like a blank canvas to work off of," said Perkins.

"We can brew almost any style of beer," said Tom Madden, co-founder of Lone Pine Brewing in Gorham. "We like to call it painting with all the colors. If you're able to create all these flavor profiles based on the ingredients that you're given, then why not color outside the lines?" 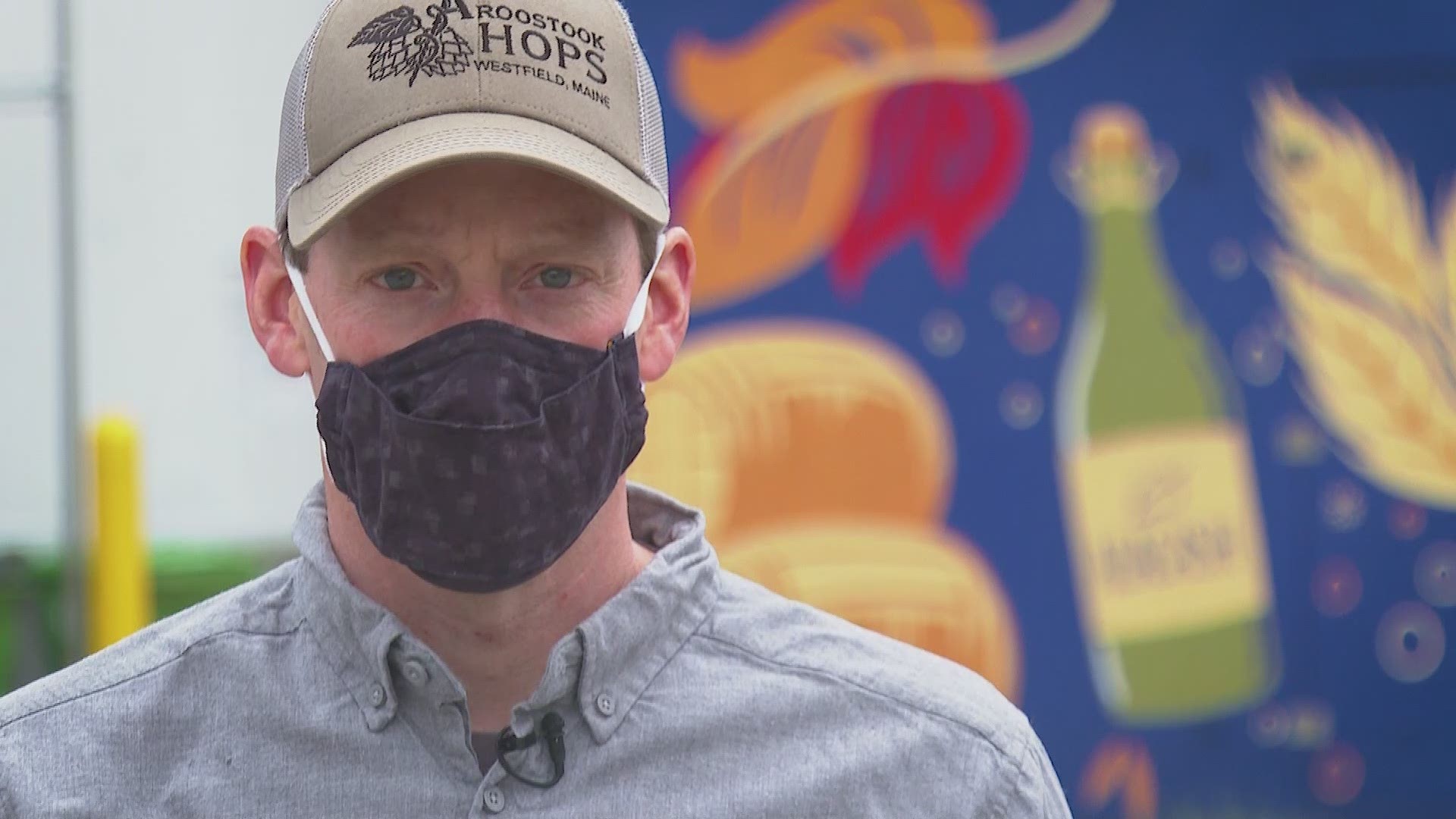 WHY IS SEBAGO LAKE SO CLEAN?

One of the reasons Sebago's water is so clean is because it's natural, not man-made.

The trees and forests around the lake naturally filter the water. When it rains, the drops hit the forest canopy, breaking up the energy from those plummeting drops so that they splash gently onto the ground.

"After it drips down through the canopy, it falls on the forest floor. The forest floor is not hard and flat like a parking lot. It's uneven and it's soft and spongy, and it absorbs all that water and carries through the ground and then it discharges into surface water," said Hunt. "So that means filtration is happening naturally while we sleep. This is the beauty of it. We don't have to do anything. We don't have to pay, we just let the forest do what it does. We just make sure it's allowed to." 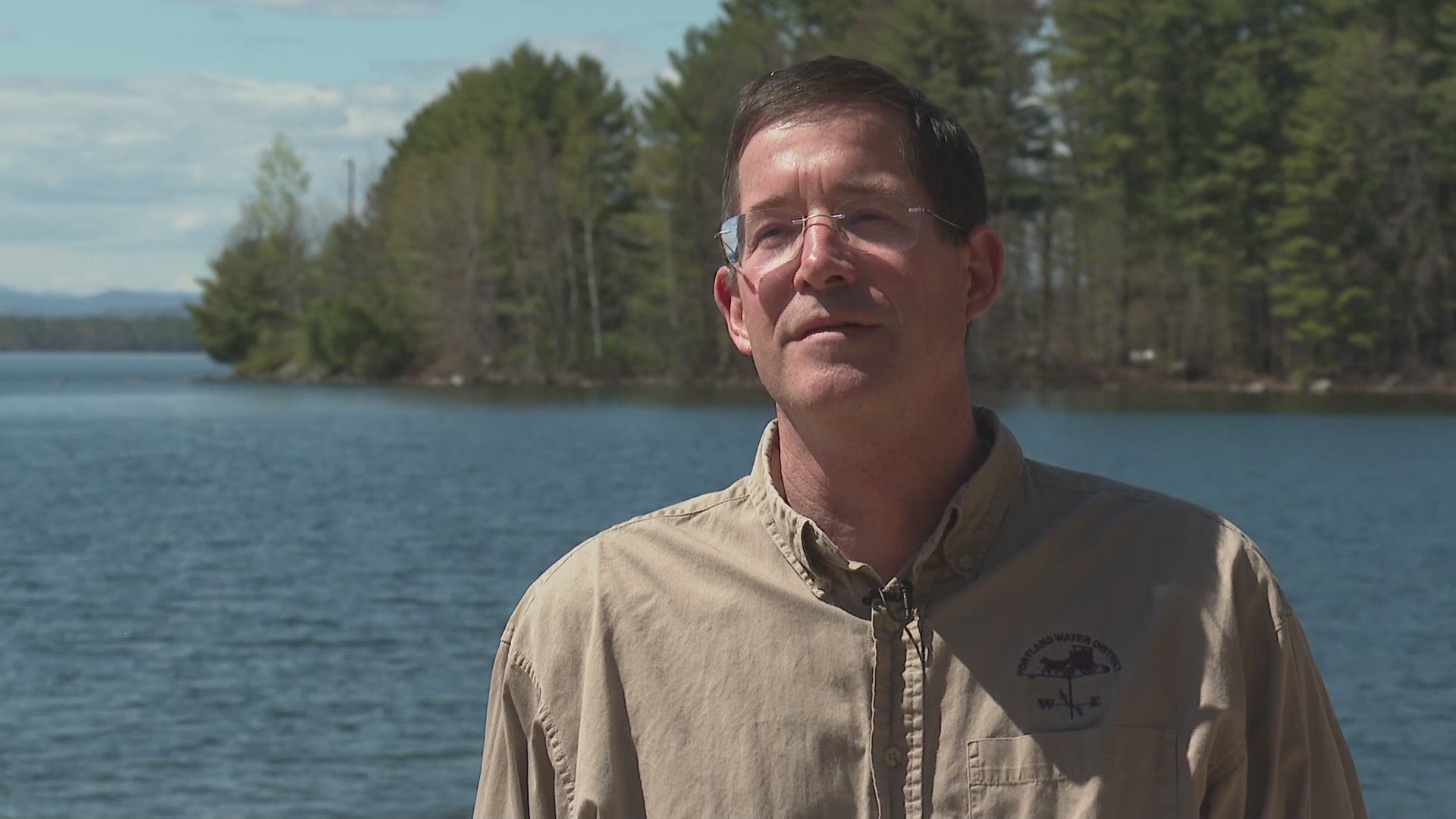 HOW MUCH DOES THE WATER DISTRICT TREAT THE WATER?

The Portland Water District pumps the "raw water," the water from the lake, into the treatment facility.

Step one is adding ozone, a gas that eliminates bacteria and viruses.

Step two: run the water through an ultraviolet light reactor, which the water district started using in 2016.

"It disrupts the DNA of any pathogens that may be present," said Dave Herzig, a water treatment foreperson.

Those processes allow the district to add fewer chemicals to make the water ready to drink.

Staff adds chlorine and ammonia to sustain disinfection; anti-corrosion chemicals to prevent lead and copper from leaching into the water from pipes; fluoride for dental health.

The district also tests the water quality in its own state-accredited lab. Scientists are required to test at least 120 samples a month under federal regulations.

"Samples can be analyzed right here so our operations crews can get instant feedback," said Mike Koza, Regulatory and Security Advisor.

The Portland Water District recently hosted a virtual tour of its facility. You can watch it here.

HOW DO WE PROTECT THIS PRECIOUS RESOURCE?

Now, groups are trying to conserve the area around Sebago Lake to make sure the water stays this clean.

Goal number one is to conserve the trees. Hunt said if we remove more than 25 percent of trees in a watershed, water quality declines. Right now, only 16 percent of the area around Sebago Lake has been deforested.

"Treatment is going to have to be enhanced, and when I say enhanced, I mean paid for," Hunt said. "I would rather see the lake stay clean than pay to treat water that's no longer clean."

The Portland Water District is one of 10 groups that make up Sebago Clean Waters, a non-profit that raises money to help landowners who want to keep their land forested.

Only 10 percent of the area is currently conserved, according to SCW, representing one of the Northeast's most vulnerable watersheds. A U.S. Forest Service study identified the Sebago watershed at high risk of losing important forestland to development pressure.

So far, SCW has conserved about 6,000 acres. Other groups have preserved even more. SCW plans to preserve another 10,000 acres through a federal grant.

The ultimate goal is to conserve 35,000 more acres in the next 15 years. That federal grant takes a big bite out of that goal.

"You don't want to wait until you see declines in quality and then start to act," said Hunt.

BREWERIES TAKE, AND GIVE BACK

Maine breweries use so much water that 38 beermakers from Kittery to Lubec and beyond formed the Maine Brewshed Alliance in partnership with the Natural Resources Council of Maine to protect water supplies like Sebago Lake.

Many of them send portions of proceeds from certain beers to fund Sebago Clean Waters.

"If you're in an area where the water doesn't taste that good coming out of the tap, imagine how the beer is going to taste," said Tom Madden, co-founder of Lone Pine Brewing in Gorham.

Breweries barely have to treat the water from the district before brewing. Some may slightly change the pH or run it through carbon filtration as a quality control measure.

"Yeah, it benefits us as breweries, but it benefits everybody. The water we use, obviously we use it to make beer, but it's the same water people use in their homes," said Perkins. "The beer is tasty around here and the lake has something to do with that." 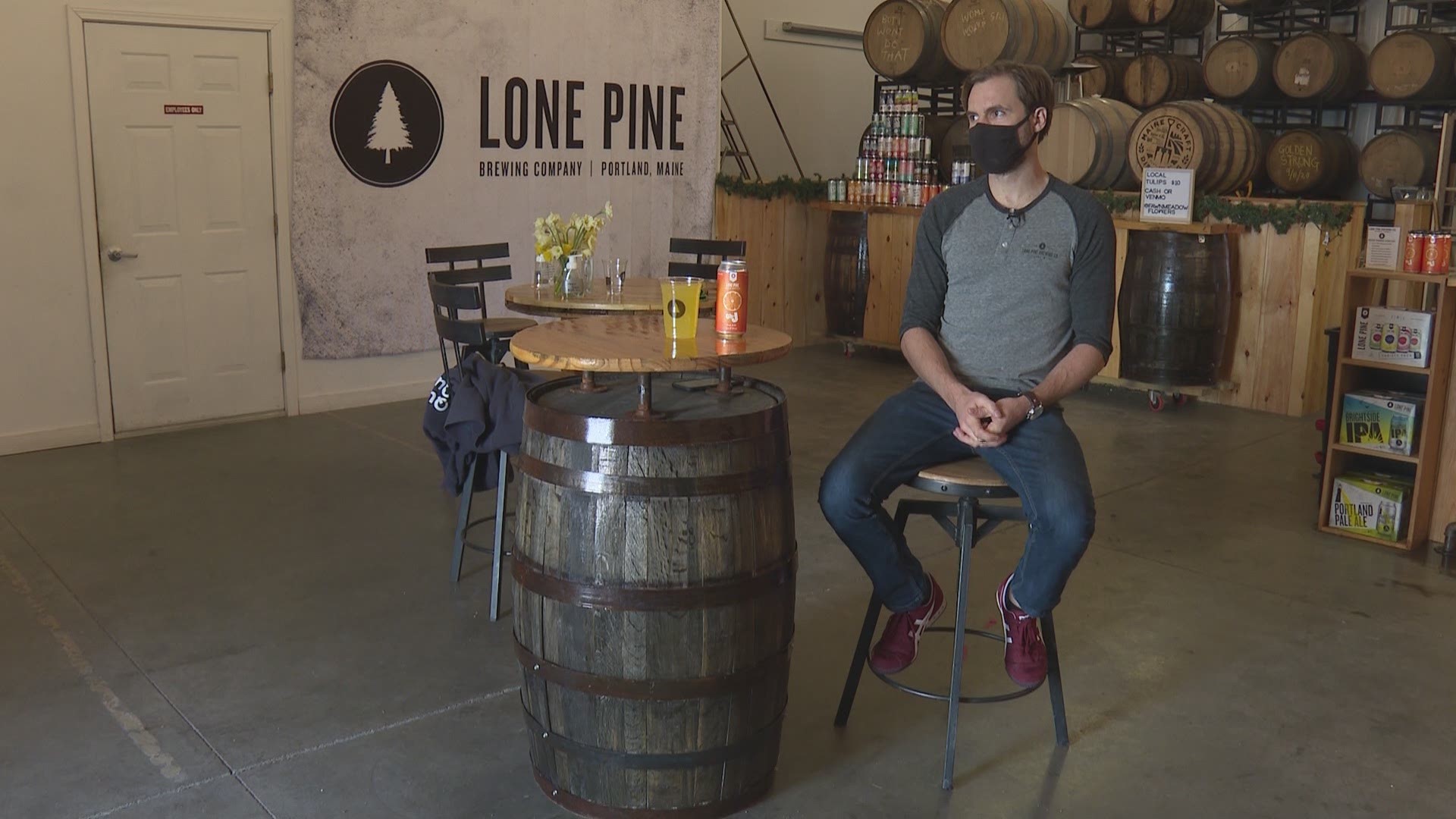