OnwardME.org launched on Tuesday, April 6 in Maine. It's part of the national OnwardUS initiative, which serves about 15 states and more than a million people. 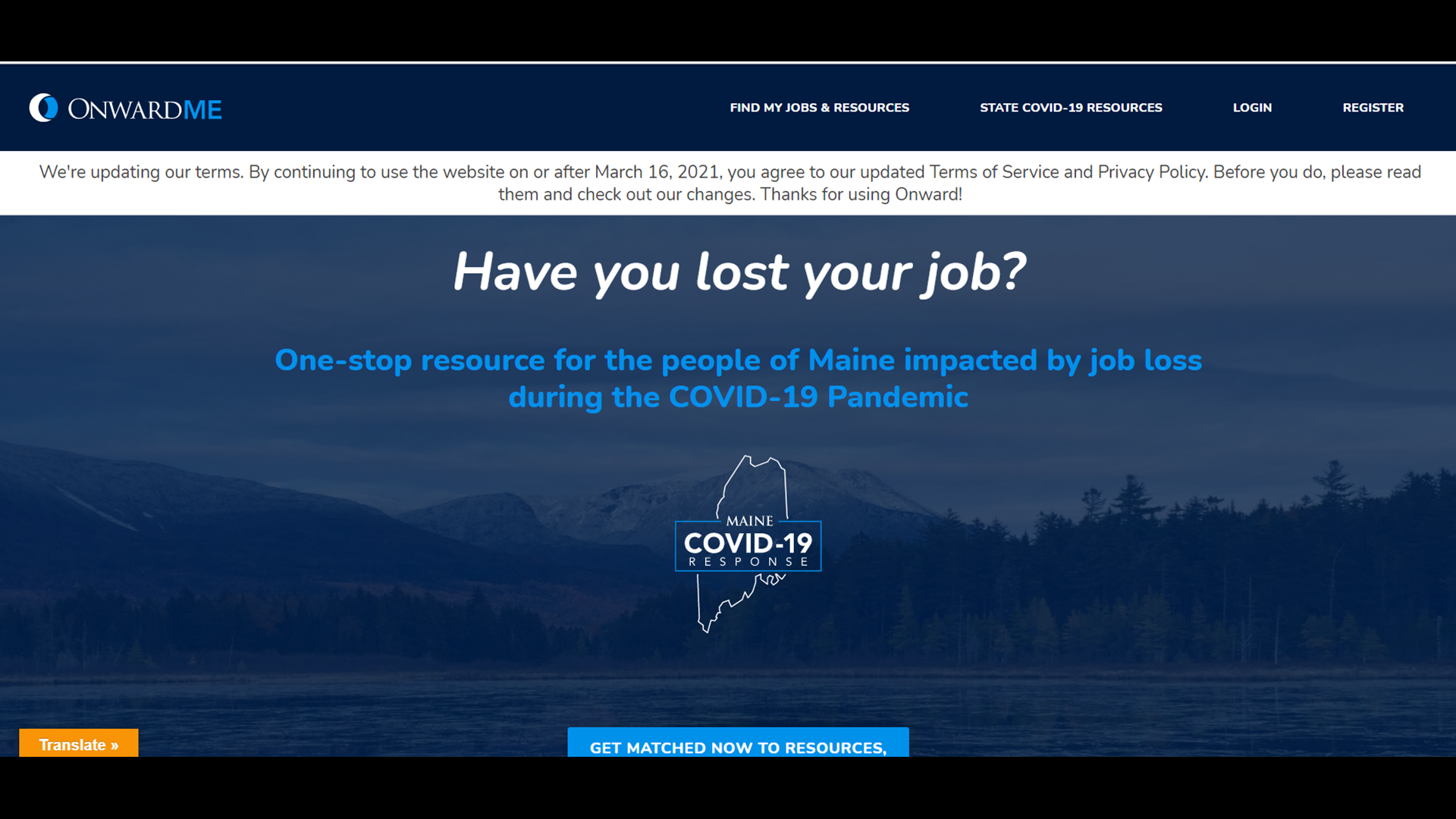 AUGUSTA, Maine — More than a year into the pandemic, tens of thousands of Mainers are still unemployed. A new website that launched Tuesday is designed to address this issue, by acting as a portal for Mainers looking for a variety of resources while unemployed.

OnwardME houses a number of resources, like job opportunities, training programs, and essential life services (ranging from food and housing to child care, health care, and transportation), under one site. Users can either create a profile upon entering the site, so it can match them with resources -- or go directly to the resources they need and find out what is available near them by entering their zip code. Users can also sign up to get notifications about opportunities.

According to the @maine_labor, about 40,000 people received unemployment benefits in our state last week. A new website @OnwardMaine is designed to help people out of work find a variety of resources they might need. I’ll have details on @newscentermaine at 6:30 a.m. #wakeMEup pic.twitter.com/5mF9EUzpT0

RELATED: US jobless claims up to 744K as virus still forces layoffs

OnwardME is one branch of the national initiative OnwardUS that launched at the beginning of the pandemic last year. It's a philanthropic effort by companies like Bitwise Industries, the Kapor Center, the New Voices Fund, etc. -- which means it's free for people looking for resources and for employers and organizations looking to post resources. OnwardUS serves about 15 states and has helped more than a million people nationwide.

Jake Soberal, the co-founder and CEO of Bitwise Industries, told NEWS CENTER Maine that OnwardME's main goal is to act as an immediate resource for people out of work in ways that other systems may not be able to do.

"The design is to sit outside of the traditional state apparatus and be emergency responsive in nature," Soberal explained. "This is not a tomorrow resource or a resource that is going to set you on a long track back to that thing that you need -- but rather, how can we get you a resource for today? Food for today? Training for today? A job for today? How do we make that as sort of near-term as possible?"

RELATED: IRS tax refunds to start in May for $10,200 jobless benefits break

As of the week ending on April 3, about 40,000 Mainers received unemployment benefits. That included 3,000 people either filing an initial claim or reopening a claim.

The Maine Department of Labor says the increase in claims is because of layoffs in retail trade; administrative and support, waste management, and remediation services; and accommodations and food services industries. It was also affected by seasonal layoffs in the skiing and logging industries. Some of the increase comes from claimants qualifying for a new benefit year, after being unemployed for a 52-week period. The Maine DOL says they're required to take at least a one-week break from filing weekly claims, so they can continue getting unemployment benefits.

Since the pandemic began, the Maine DOL has paid out more than $2 billion in federal and state unemployment benefits and managed more than 359,000 total initial claims.

RELATED: Could there be a fourth stimulus check? Momentum grows in Congress, reports say