The Maine Department of Agriculture, Conservation, and Forestry says the state is in the midst of a browntail moth outbreak, and it isn't expected to end soon. 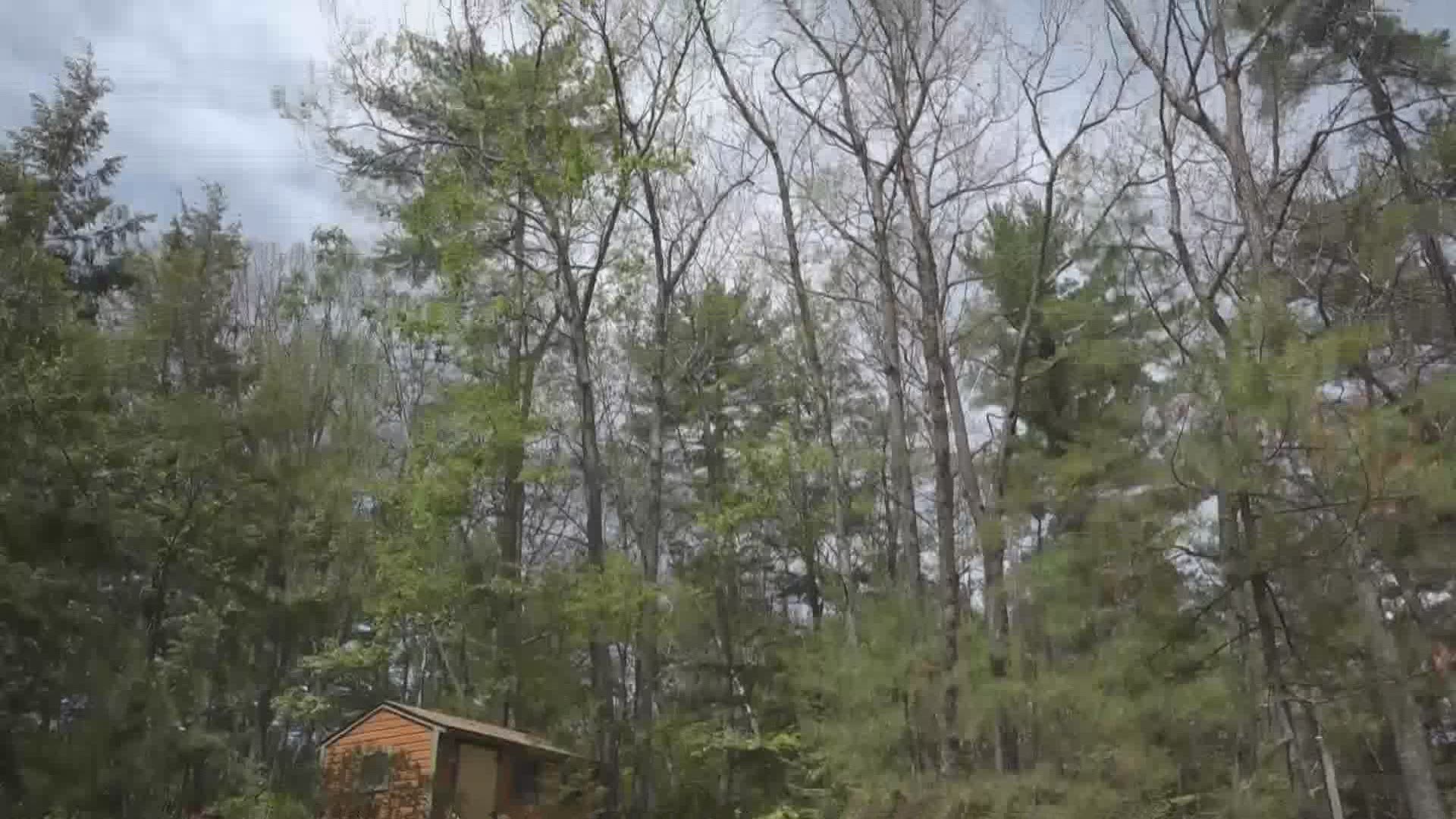 MONMOUTH, Maine — Bob Carr's seasonal home in Monmouth looks a bit quieter than usual this year. Normally, the warm temperatures early in the season would be ideal for swimming in the lake or sitting out in the sun -- but an invasion of browntail moth caterpillars has put a halt to those plans.

Carr says about two weeks ago, he came down to his cabin and saw it was covered with these pests -- on the ground, in the gutters, on every surface. A mound of dead caterpillars sits in the gravel now, after Carr and his husband used a Shop-Vac and soapy water to try to get some of them off of the roof. Even though they're no longer alive, they still pose a threat with their hairs, which can cause rashes and respiratory problems.

"People are really devastated by this," Carr said, shaking his head. Some of the trees in his yard have been completely stripped of leaves by the caterpillars. He says if that continues to happen for a few years, the trees may die.

"Witch hazel is sold out. Benadryl is sold out. Calamine lotion is sold out," Carr added, talking about a local pharmacy in the area, indicating he's not the only person experiencing this problem.

This is a mound of browntail moth caterpillars in Monmouth. Some residents here and across Maine are experiencing the worst infestation yet. I’ll explain why experts say this is happening and why options to take action are limited on @newscentermaine at 6 and 6:30 a.m. #wakeMEup pic.twitter.com/xzd4jWFxRd

RELATED: Experts say it will be another bad year of browntail moth caterpillars in Maine

A short drive away, the municipal building has also been impacted. Town manager Linda Cohen says they had to power wash hundreds of caterpillars off of the roof of the building.

She says after hearing concerns from residents around town that this year has been the worst it has ever been, she reached out to the state but found out there was basically nothing the town could do. Having the state declare a public health nuisance requires an intricate process, and Cohen says even then, all it would allow the town to do is spray its own property. No funds or services would be granted, and Cohen says the Monmouth town budget for this year and next is already booked.

"We all are here to help the townspeople to be able to live their lives enjoyably in the town," Cohen said about the role of the town staff. "To pretty much have your hands tied and not be able to do something...it is frustrating."

Kyle Rosenberg is an arborist for the city of Bath and also owns his own tree and shrub pruning company, Forest to Shore. Rosenberg says the high demand for services has been overwhelming this year, since some people who have never called before are doing so.

"When we have folks calling who are sort of just cold-calling trying to find any help they can, we want to be able to help, but it's a challenge," Rosenberg explained. 'We're still trying to go through our commitment list, you could say, of folks who already signed up -- sometimes as early as this time the year before."

Browntail moth caterpillars are active between April and late June or early July. Jim Britt, the communications director for the Maine Department of Agriculture, Conservation, and Forestry, says the state has been experiencing an outbreak of browntail moths for the past few years, due in part to drought-like weather. He also says the problem isn't expected to improve any time soon. Browntail moths seem to be spreading inland with natural movement, as well as movement via busses and trailers, and have been identified in all 16 counties now. The 2021 Winter Web Moth Survey indicates they're most prevalent in Kennebec, Knox, Lincoln, and Waldo counties.

RELATED: Slamming The Door On Visitors Maine Wants No Part Of

When it comes to actually addressing the problem, though, options are limited.

"The larger idea of farther-reaching or mass spraying -- it's not feasible for a long list of reasons, such as budget concerns, society's feelings towards pesticides, the sheer number of acres that we would need to try to spray," Britt explained.

The best thing people can do is be proactive by removing webs from trees in the wintertime. Britt says the issue as a whole should begin to die down soon, as the caterpillars become moths. The hairs can stay in grass or leaves, though, so it's best to still take precautions if you're in an affected area. Per the Maine CDC, that includes:

If you need help, you can call 211 with concerns. You can also visit the Maine DACF's FAQ website.