Some restaurants like Portland's Terlingua Restaurant are changing their business models to address the worker shortage, brought on by COVID-19 and summer's end. 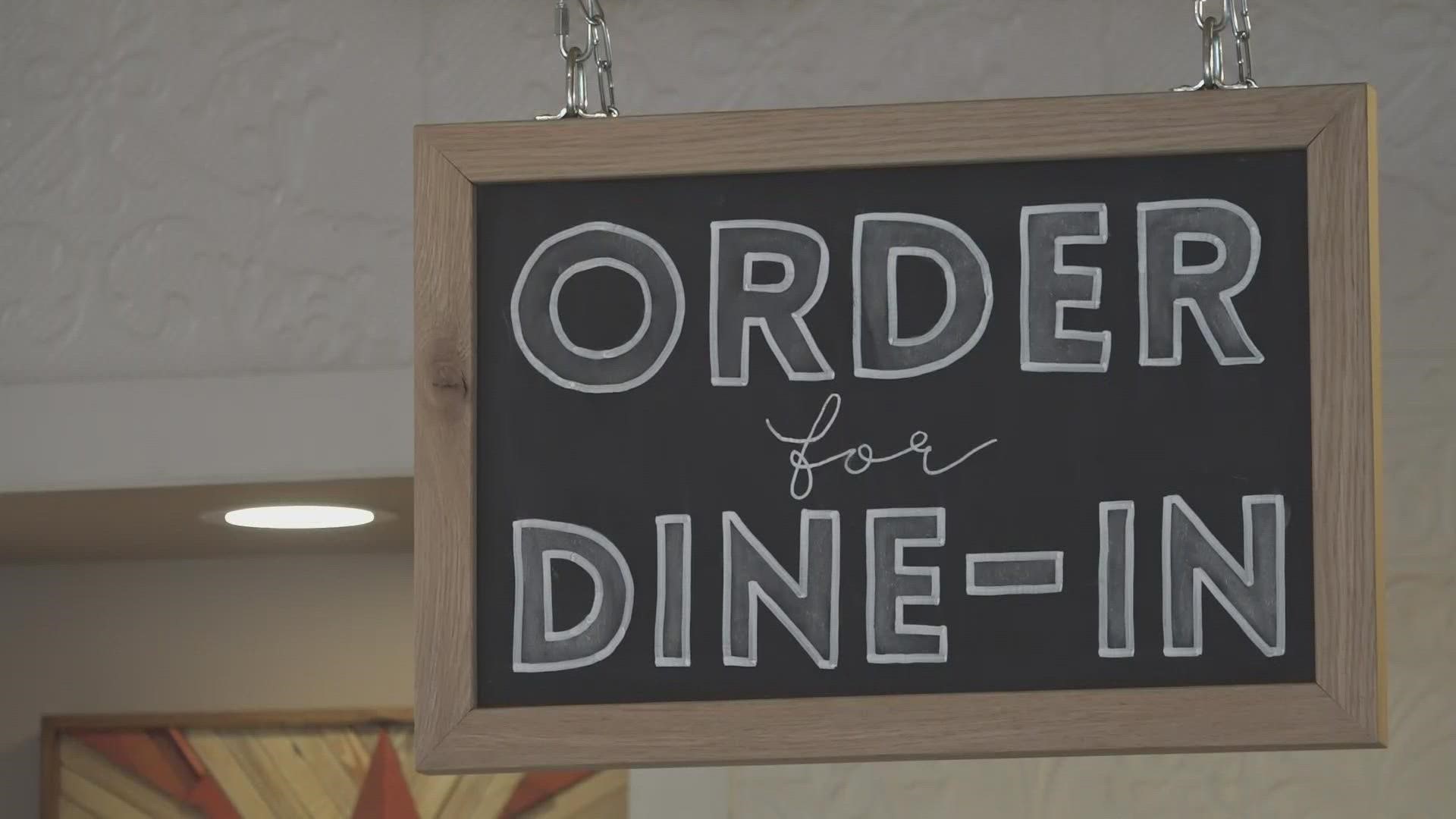 PORTLAND, Maine — For Pliny Reynolds, co-owner of Portland's Terlingua Restaurant, business over the past year and a half has looked anything but normal. Hospitality is a passion of his, partly because of the human connection and interaction. The isolating nature of the pandemic has made that tougher, though -- a challenge felt around the industry.

"It has been a difficult summer," Reynolds said, shaking his head. "It has been more stressful than anybody can remember."

Relatively speaking, Terlingua has fared quite well. Behind the white building is a large outdoor space where guests can sit comfortably and eat their meals separated from strangers. Even still, a new problem has been rearing its head the past couple of weeks as school picks up again and seasonal students workers head back to the classroom.

Some Maine restaurants like Terlingua Restaurant in Portland are adapting their business models, as a response to a shortage of workers — a problem made worse by high school and college students heading back to classes. That story on @newscentermaine at 6:30 a.m. #wakeMEup pic.twitter.com/iGJX3YdvGl

In response, Terlingua has taken on a new business model, trying out counter service to consolidate staff while still maintaining regular hours. Now, Terlingua staff members greet guests at the door, take their orders at the front counter, and explain that they can order more food by using their phones with a QR code at the table. So far, the system is generally working, but Reynolds said it doesn't feel completely natural, calling it a "frustrating adjustment".

"Part of the reason people come to restaurants is that interaction and that sense of service and that welcoming nature that servers provide," he expressed.

In Brunswick, Fat Boy Drive-In closed on Labor Day this year, which is earlier than usual. Owner Mike Jerome said students started to leave in August. He said he lost about 20% of his employees two weeks ago and another 60% last week. With multiple other restaurants to run, he decided it would make the most sense to prioritize them by closing Fat Boy for the season.

"There were a lot of parents and students who said, 'I missed an entire year of school. I need to just focus on that,'" Jerome explained about his dwindling number of staff members.

DiMillo's On The Water in Portland is in a slightly different situation with employees who are working on more of a long-term basis. There has been some shortage of workers throughout the summer, though, and the restaurant has addressed it by scaling back the menu, operation, and seating.

"We're looking for some people right now," manager Steve DiMillo said. "We need some bar-backs. I think the dining room manager is all set -- she has some applicants for waitstaff."

Greg Dugal, the director of government affairs at HospitalityMaine, said students usually make up between 20 and 25% of the hospitality workforce in Maine. This year, that number increased to 30 to 40% -- especially since there were far fewer foreign seasonal workers coming over on H-2B or J-1 Visas.

"My understanding is the state had more applications for work permits for 14- and 15-year-olds than they ever have," Dugal emphasized, later noting, "I think getting anybody back to work at this point in time will be a huge help to us."

As for why this labor shortage is happening, there seem to be a few reasons. In a statement, the Maine Departments of Economic and Community Development and Labor said:

"...the tight labor market, which is an issue that is not unique to Maine and is being felt by nearly every state in the nation, is largely being driven by several factors, including concerns about the virus, lack of affordable child care, housing, perceived age bias, and individuals considering career changes, among others."

The Departments also note that several studies have indicated states that ended the federal unemployment programs early "did not not see a significant increase in people taking jobs and, in fact, may have adversely impacted their own economic recoveries."

That perspective is one some restaurants seem to agree on -- that most people aren't just at home waiting for an unemployment check. For many, the pandemic has been a time of self-reflection.

"For the majority, (hospitality) is a stepping stone. It provides valuable life skills, social skills, money," Jerome said, adding, "(The pandemic) gave people more time than they would have normally to consider their options for the future -- and I think a lot of them did."

"(The pandemic) has allowed people to ask a lot of fundamental questions about work and life and balance," Reynolds said.

The worker shortage isn't totally a new problem, either. Some places were struggling in 2019, even before the pandemic. The Maine DECD and DOL noted, "...Maine has long grappled with a tight labor market. Independent of the pandemic, Maine's population structure is imbalanced with more people aging out of the workforce into retirement relative to the younger people who are ageing into the workforce to replace them. It was one of the state's most serious challenges prior to the pandemic..."

Dugal said he believes conversations are in the works now to discuss how American Rescue Plan Act funds may be divided for small businesses in the form of grants, loans, and loan guarantees -- something he said is "critical" with the slow season approaching.