As of Wednesday, April 7, Mainers 16 years and older can get vaccinated, as Maine continues to battle the COVID-19 pandemic. 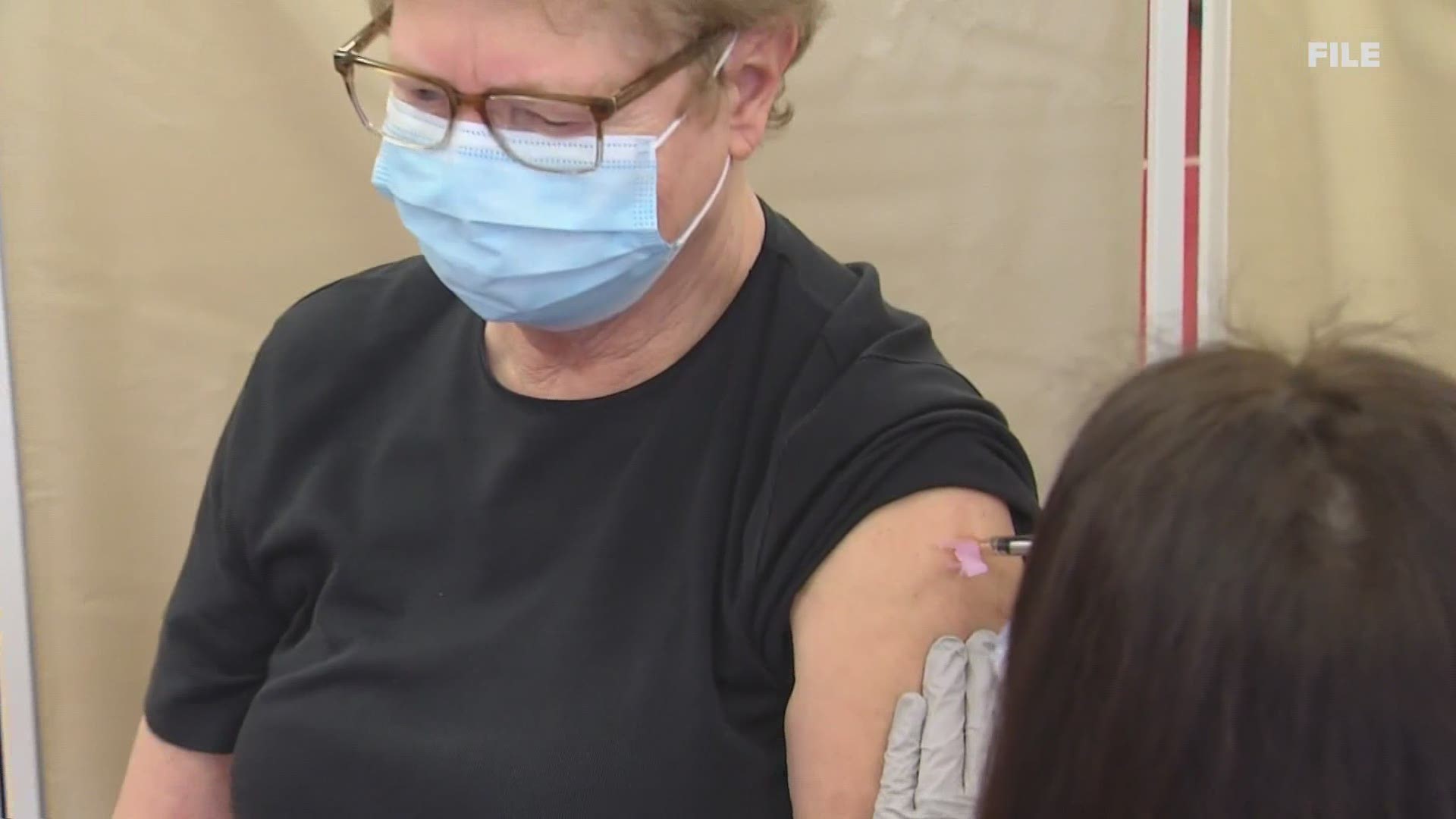 SCARBOROUGH, Maine — Vaccine clinics statewide are preparing for an expected surge in demand, as the eligibility in Maine to receive a COVID-19 vaccine changes. As of Wednesday, April 7, Mainers 16 years and older can get vaccinated—a noticeable difference compared to the 50 years and older requirement, as of March 23.

Governor Janet Mills made this announcement late last week. Originally, the date for this change was supposed to be almost two weeks from now on April, but in a press release, the Mills administration said that timeline could be moved up because of an expected "significant increase" in vaccine supply from the federal government. As a result, demand to set up an appointment to get vaccinated is surging—and vaccination sites are working to keep up.

"I think it's sort of like the stores preparing for Black Friday before Thanksgiving," Dr. Dora Mills with MaineHealth said. "We've been preparing for this for, in some ways, many months."

Today, Mainers 16 years and older are eligible to receive the #COVID19 vaccine. I’m LIVE at the Scarborough Downs Vaccination Clinic with details about how officials are preparing for a surge in demand. That story in all half hours on @newscentermaine. #wakeMEup pic.twitter.com/sMuMAbGwnX

RELATED: Everything you need to know about COVID-19 and the vaccine rollout in Maine

MaineHealth is expecting to administer 26,211 first and second doses of the vaccine this week. Mills says although allocation may not be as big in the coming weeks, people who are already pre-registered should be able to get their first shot within the month. MaineHealth doesn't have enough vaccine to give to everyone who wants it yet—a good sign of interest, Mills says—but MaineHealth will call patients on the waiting list when a dose becomes available.

"We're getting almost 100,000 doses in Maine this week alone, so your turn will come," Mills encouraged.

To help meet that increase in demand, MaineHealth has extra sets of hands-on-deck with more than 5,000 volunteers across 10 vaccine clinics. Mills says there are more days with services available now -- and the hours at some clinics are expanding into the evening, too.

"We've had a waiting list of volunteers," Mills noted. "We've been calling them in the last few days."

RELATED: Feeling sick (or not) after a second dose of COVID-19 vaccine does not indicate shot's effectiveness

Some Mainers have been frustrated trying to sign up for slots to get vaccinated. Robert Sylvain of Portland and his wife were both able to get vaccinated in the 50 years old and up group—but he says they ended up driving round-trip to Northern Light Health's clinic in Dover-Foxcroft for a more immediate, earlier appointment. When eligibility expanded, his son was in the same situation, finding it difficult to move past the waiting list for a vaccine in southern Maine, so he also decided to sign up in Dover-Foxcroft.

"I felt like I was milliseconds away from somebody else clicking on that timeslot," Sylvain said about the frustration of signing up. Sylvain says he and his family don't mind the roughly eight hours they will each end up driving round trip to get vaccinated, noting that for some people stuck at work or without a car, it's not an option.

"What about the people who are less privileged?" Sylvain questioned.

The key message health officials are trying to relay is that patience will be necessary in the coming weeks as the state plays catch-up in a daunting process.

"What I tell people is if you get put into the virtual waiting room—while it may say a long time, most people have been saying that the clock actually speeds up pretty quickly," Dr. James Jarvis with Northern Light Health assured.

He says getting a vaccine is worth the wait in the bigger picture, and there is hope on the horizon. The goal is to have large vaccination sites closed by July 4.

"Looking outside your own household, just think about your own community," Jarvis encouraged. "The more we decrease the overall amount of virus in our communities, the sooner we will get back to some sense of normalcy—and the only way that can happen is through vaccination."

"It’s so critical that we get as many people vaccinated as quickly as possible," Mills noted. "It is a race against time: virus versus vaccine."

Mills says Mainers should follow the "triple A's": accessing the vaccine, asking others if they've been vaccinated, and assisting them in finding a vaccine. As of April 6, 797,157 total doses have been administered—including 463,662 first doses and 316,929 second or final doses. Appointments now are based on waiting lists.

As a reminder, 16 and 17-year-olds can only receive the Pfizer vaccine currently with consent from a guardian. It's important to make sure the clinic you plan to visit is offering Pfizer, if you fall into this age range.