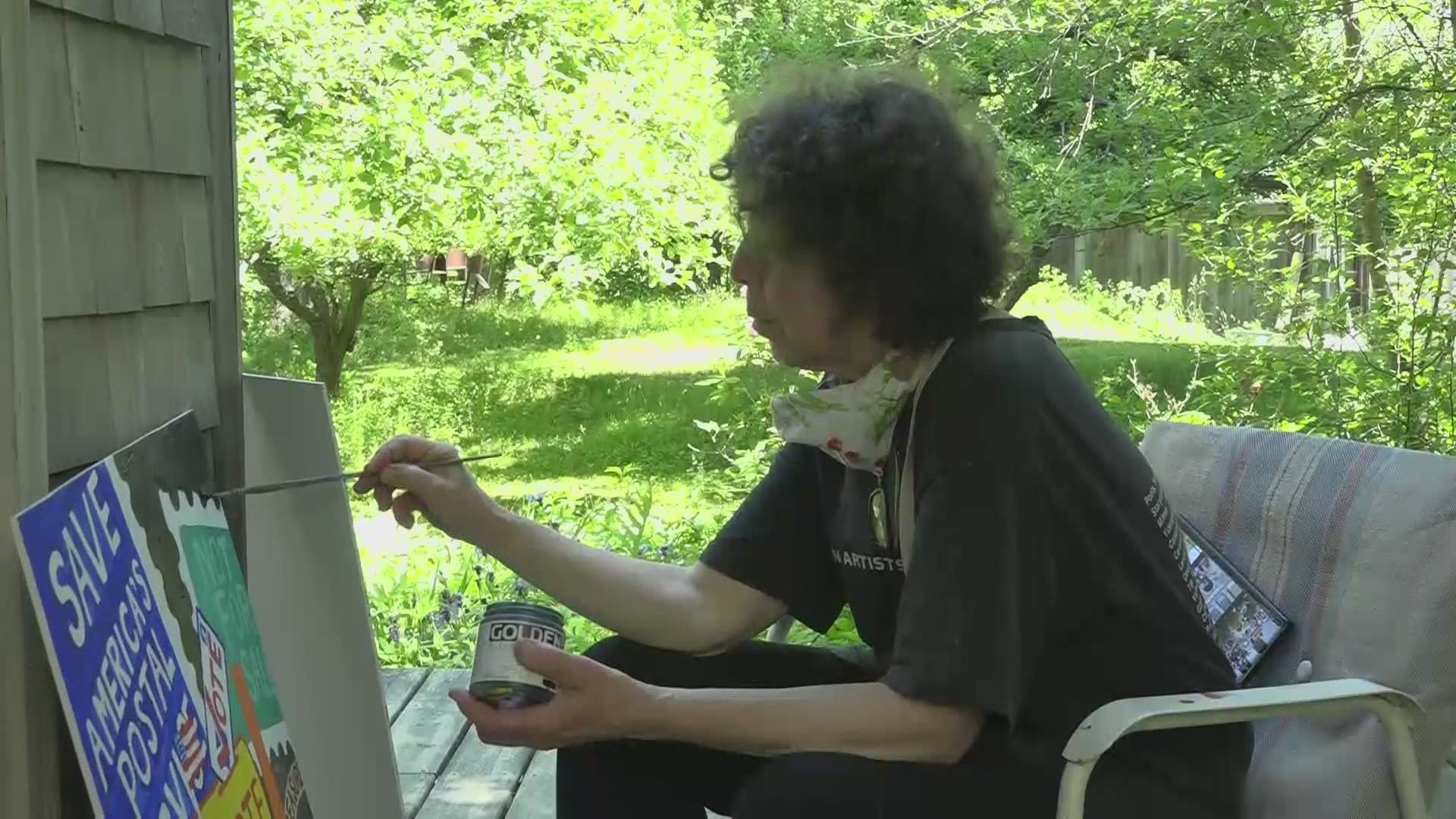 MAINE, USA — It's a hazy Friday afternoon in Whitefield, as Natasha Mayers works on her deck, hidden in a tangle of bushes and branches that, come late June, have fully bloomed. Dipping her brush into a jar of 'Bone Black' acrylic paint, Mayers works a plywood canvas, filling in blank spaces on one of her latest pieces.

"It goes beyond the rhetoric. It goes beyond the words -- and it's often the words that divide us," Mayers expressed to NEWS CENTER Maine about the power of art, twirling her paintbrush in an old yogurt cup filled with water. She is the coordinator of the Artist Rapid Response Team (ARRT!), a group made up of about a dozen artists that create banners and signs for non-profit, progressive groups around the state.

Mayers says she thinks their work is powerful, since pictures sometimes speak louder than just words -- a lesson she's learned over the years.

"I don't know how to be a good listener," Mayers chuckled admittedly. "I'm not a good debater, but I can make art."

Sitting nearby on Mayers' deck is fellow ARRT! member Robin Huntley. She says working with this group has been a positive decision during the COVID-19 pandemic, since it helps her feel like she is aiding change in some way.

"When presented with just something to see, it makes people think," Huntley noted, agreeing with Mayers about the significance of an image. "(Viewers) might not think the same thing you're thinking -- they might not think what you're expecting them to think -- but they're going to start using their brain(s)."

The concept is an enticing one to a number of local (and out-of-state) activism groups. Mayers says the group has created material in the past for protests in Ferguson, Missouri and South Korea. These days, though, ARRT! members are focusing on a different project in collaboration with Lincoln County Indivisible -- making colorful roadside signs with different messages about progressive issues. The pieces don't support any particular candidate, but instead speak to grander ideas about social change.

"I see this yard sign art as a way to start a conversation," explained Nigel Calder, acting chair of Lincoln County Indivisible. The walls of his garage in Newcastle are lined with ARRT! creations not yet positioned on metal posts in his front yard.

Calder says he hopes the artwork will catch people's attention and perhaps sway their opinions about certain issues.

"It doesn't matter whether we're Republicans, Democrats, or Independents. We have to focus on these issues," Calder expressed.

RELATED: As protests wind down, what's next for those wanting change?

In Portland, projection artist Tina Marie Davidson agrees. She has been lighting up certain buildings in the city come dark, projecting messages related to racism and George Floyd's death for the public to see. The mission is perhaps serendipitous -- Davidson says a few years ago, she found an old projector laying on a trash pile and, since then, has been enthralled.

"Systemic racism is embedded," Davidson told NEWS CENTER Maine via Zoom about why she does her work. "Like I often say, there's nothing more American than racism."

As a white woman, Davidson says she is using her position as an ally to listen to the experiences of people of color -- and to be there when she's wanted to try to educate others. Davidson says that usually happens organically when people find her during her projecting adventures and want to talk to her about her work.

"You just have these great conversations with people -- young people, old people, everybody," Davidson smiled.

RELATED: 'People have been awakened' -- how white Mainers can be allies in least racially-diverse state

For these artists and activists, those conversations are hopefully fuel for lasting change.

"When I see these yard signs out, and I see our banners in use around the state, I'm hopeful that they're doing something," Mayers said confidently.

"There's something going on here that's really important, and we have to keep it going and make sure there is some genuine change," Calder expressed.

RELATED: Fire breaks out at hazmat facility at US air base on Okinawa