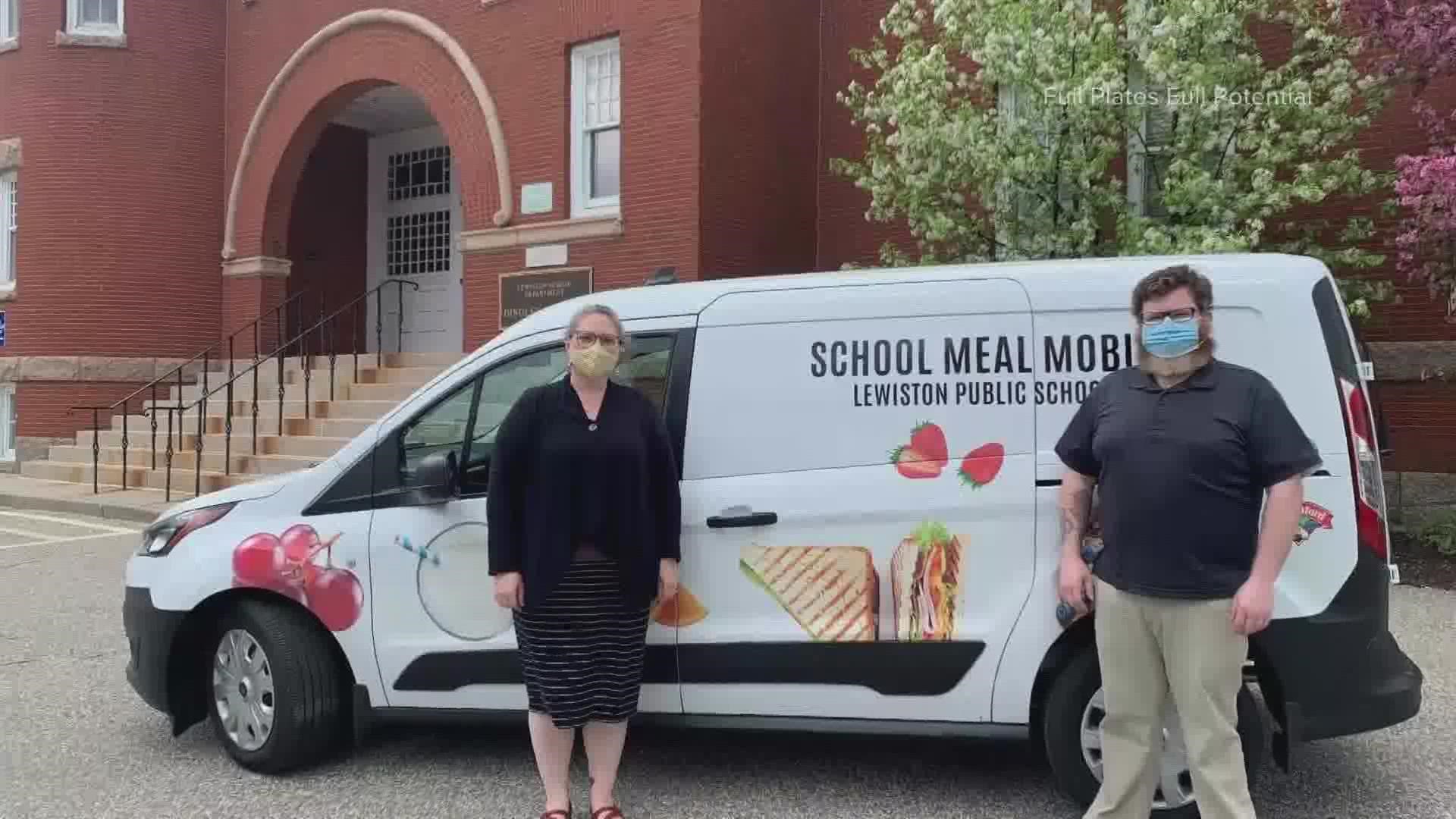 LEWISTON, Maine — Two issues that often go hand-in-hand are hunger and lack of transportation, and Maine is not immune to these challenges. The pandemic brought childhood hunger to light after schools closed last year, temporarily leaving some children wondering where their next meal would be coming from. School and summer meal programs can be difficult for some students to reach, which is why an initiative has been creating change the past few months.

If you're in Lewiston, you may see a white van with pictures of fruit, vegetables, and whole grains on the side. Lewiston Public Schools received this new van for free in the spring through Full Plates Full Potential, thanks to a $100,000 grant from Hannaford Supermarkets. That money also helped provide vans to two other school districts: RSU 12, which covers the Sheepscot Valley area, and MSAD 58 in the western mountains.

"It's cool when you're driving around. People can see the fruits and veggies," Alisa Roman, the director of nutrition and transportation for Lewiston Public Schools, told NEWS CENTER Maine. "Some of my administrators -- they wave regardless because they know it's ours, so it's been a pride for us, as well."

Earlier this year, three school districts received new vans for free to help deliver summer meals to students with transportation issues. I visited Lewiston Public Schools to see how the team has served almost 50,000 meals. That story on @newscentermaine at 6:30 a.m. #wakeMEup pic.twitter.com/vTbxzmufw3

Roman said she and her team have already delivered more than 46,000 meals this summer to 16 different sites using the School Meal Mobile, and she expects they'll hit the 50,000 mark this week. She said the van has played a big role in helping the school district make sure every kid who needs food is taken care of.

"Some of those kids -- they can't get to us, so if we can get to them, then we're solving that problem," Roman said, noting her team has been giving out meals for 520 days. She said there are about 5,500 students in the Lewiston school district -- and her team typically feeds about 4,500 of them daily, although that number goes down slightly during the summer, since some students are away.

"I think the need for Lewiston is higher -- the highest for the state of Maine," Rhonda Hart, the nutrition manager for Lewiston High School, said about food insecurity in Maine's second largest city. "I think there are a lot of children that need it in the area."

For her, knowing that the work is directly impacting people is the reason for doing it.

"It's satisfying that we get to come in and make a difference in children's lives every day -- who maybe wouldn't get food if we weren't here," Hart expressed.

Before having the School Meal Mobile, the school district had to pay to rent a van, so this initiative has helped lift a financial burden. Kitchen employee Peter Sharpley is one employee who delivers a lot of meals, working every weekday morning of the summer to help get it done.

"It's what keeps us going, as far as working here, because we want to feed the kids and make them happy, make sure they're growing up strong," Sharpley noted.

The School Meal Mobiles are designed to help the three school districts establish some type of long-term solution to addressing hunger. Justin Strasburger, the executive director of Full Plates Full Potential, says the vans obviously don't have "infinite" lifespans, but they're designed to serve their communities for years to come. Strasburger says he estimates these vans have helped feed 1,200 more students every day this summer.

"Hunger is the most basic need pretty much that we have, and when you talk about children -- children are at the mercy of adults making decisions," Strasburger said. "No child should go hungry, due to adults not figuring out a way for us to get our act together."

"We don't want to just put a band-aid on it," Sherri Stevens, the community relations manager for Hannaford Supermarkets, explained about food insecurity. "We want to invest in ways that really create meaningful and long-lasting impact."

That's something that Sharpley gets to do every day.

"They always say we're a hero, but I think we're just here to do our job," Sharpley said. "It helps, and it makes us feel good that the kids are being fed, even when they're not in school."