The Launchpad open mic program at the Bangor Arts Exchange happens the first Sunday of every month and is partly funded by a grant from the city. 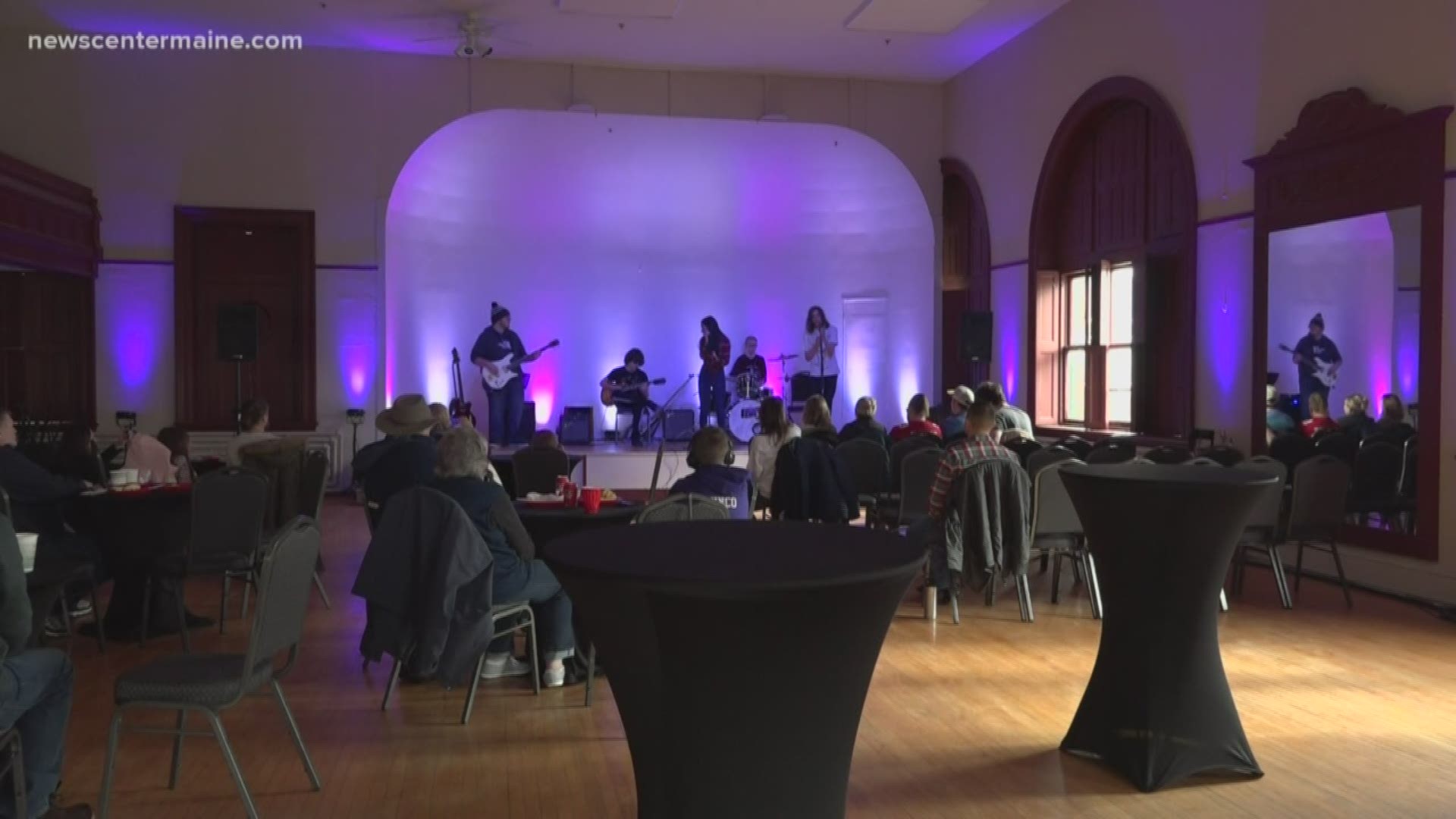 BANGOR, Maine — Sunday mornings in downtown Bangor are quiet this time of year. Except for the occasional group of friends leaving a brewery, or the rush of a car through unusual traffic patterns, the streets are undisturbed and a little bit lonely.

Head up a couple of flights of creaky stairs at 193 Exchange Street, though, and that all changes. It's here where on the first Sunday of every month, people are invited to come out to take to a professionally lit stage and perform -- or sit among others and enjoy a couple of hours with good company.

The Launchpad open mic program at the Bangor Arts Exchange is fairly new. On Sunday, February 2, it celebrated its third month giving people of all ages and talents the opportunity to, quite literally, share their voice. In a beautiful third-floor ballroom with a full sound set-up, it's quite the opportunity for rising performers.

"It's really intimidating as an artist to be starting your craft and not really having a direction," Sadie Webb, the operations manager for Launchpad, told NEWS CENTER Maine. "It's really nice to meet other people that are doing what you're doing and get that connection."

That connection in the arts network world is incredibly important -- and so is having a chance to be on a stage, especially for the first time.

"Emerging musicians really just need a place to perform," expressed Joshua Gass, the managing director for Launchpad. "They need that first opportunity to get on stage and be in front of an audience."

It's a mission the City of Bangor apparently resonates with, granting Launchpad $2,000 in its latest round of arts and cultural grant awards, distributed in the fall of 2019. The money helps to fund logistical and production needs for Launchpad, since the open mic program is entirely free for both performers and audience members.

"The way that the city of Bangor gives away arts funding in order to act as a little bit of an incubator for the arts in central and northern Maine is really pretty unique," said Betsy Lundy, the downtown coordinator and cultural liaison for Bangor.

RELATED: From Syria to Bangor, a hip-hop journey with a few stops along the way

That support hasn't gone unnoticed by the people the city helps -- some saying that without it, their missions wouldn't be possible.

"There's importance behind what we're doing, and it's highlighting something that we're really passionate about -- and that we know there's a lot of passion in the area for," Webb emphasized.

"Receiving the grant from (the city) is like the difference between us, maybe, doing or not doing the program," Gass added.

It's a chance to feel like you belong for a couple of hours, whether you've been on stage more times than you can count (like the band of three 'Ghost Kitty', whose members say they've been around for 15 years) -- or if you're just starting out, like guitar player Thomas Runco, who took up the instrument less than a year ago after breaking his hips.

"I believe music is a language unspoken and that even if a song doesn't have lyrics, people can feel what it's about," Runco said with a smile.

The next round for Bangor's arts and cultural grant awards closes on May 1. To learn more about how to apply and who is eligible, click here.